Congress is going on offense against President Donald Trump’s use of emergency powers to arm Arab states. 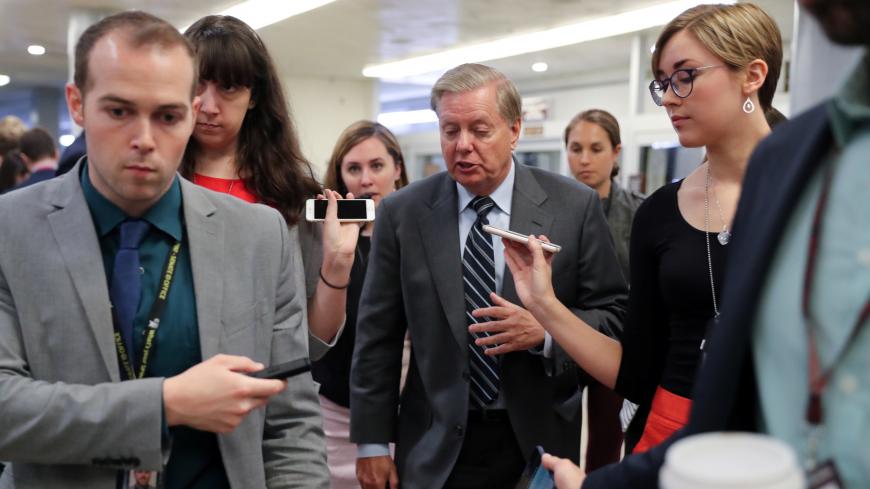 US Sen. Lindsey Graham, R-S.C., speaks to reporters on his way to the Senate floor for a vote at the US Capitol in Washington, May 14, 2019. - Reuters/Jonathan Ernst

Some of President Donald Trump’s key Republican allies joined Senate Democrats today in a sharp rebuke of his decision to invoke emergency powers to get around Congress on arms sales to the Saudi-led coalition in Yemen.

Even Republicans who may support the sales are stepping aside to let Congress assert its authority.

Risch also told Al-Monitor that the committee is “continuing to try to negotiate a Saudi Arabia bill overall to include some of these things, hopefully. But maybe not. It’s hard negotiations.”

“Even though I may support actual sales of defensive weaponry, I don’t support the administration going around the existing congressional review process,” Rubio told reporters. “I haven’t read all 22 of the individual [bills], but I will tell you I don’t believe the administration should be able to go around Congress.”

Meanwhile, the House Foreign Affairs Committee announced a hearing next week on the Trump administration’s “dubious” end-run around Congress on arms sales. Democrats on the committee vowed to grill Assistant Secretary of State for Political-Military Affairs R. Clarke Cooper on the issue, arguing that the Trump administration’s case “is utterly without merit.” They also vowed to “introduce a series of measure to stop this sale from going forward.”

Secretary of State Mike Pompeo cited Iran as a “fundamental threat” last month to get around a yearlong hold that Menendez had placed on 120,000 precision-guided missiles to Saudi Arabia and the United Arab Emirates, which are battling the Iranian-backed Houthis in Yemen. The move has exacerbated an escalating turf war between Capitol Hill and the Trump administration.

Menendez accused Pompeo of abusing the emergency authority and breaking the arms sale process. He called on Pompeo to “withdraw his emergency certification, immediately submit these sales for the normal congressional review and engage with senators to address our concerns.”

Emboldened by Republican support that allowed the Senate to pass a resolution 54-46 to end US support for the Saudi-led coalition in Yemen, Democrats believe they have enough votes to pass at least some of the arms sales resolutions. But Trump could still veto any bill that passes, just as he did the Yemen resolution.

Still, the Arms Export Control Act provides for 10 hours of floor debate per bill. This could result in nine full days of floor debate in which senators from both parties lambaste Saudi Arabia on everything from the Yemen war and the murder of Jamal Khashoggi to Riyadh’s torture of political prisoners and its refusal to rule out a potential weaponization program in its civil nuclear negotiations with the Trump administration.

The State Department told Al-Monitor that it plans to move forward with the arms transfers despite the bipartisan objections.

“While we will not comment on proposed congressional actions, the department has met the requirements of the law and followed relevant practice in invoking this emergency authority and is moving the transfers forward,” a State Department official told Al-Monitor.

The official argued that the emergency powers were “needed to help our partners better defend themselves and to reinforce recent changes to US posture in the region to deter Iran.”

While at least four previous administrations have invoked emergency powers to transfer weapons without the routine congressional notification process, this is the first time lawmakers have used legislation to openly challenge the decision.

“I think that [the Trump administration] thought they could avoid a vote on the floor altogether by doing this, and that they could just proceed to immediately transferring the equipment,” said Brittany Benowitz, a lawyer with the Forum on Arms Trade and a former defense aide on Capitol Hill.

Given the uncharted legal territory, it remains unclear whether the Senate parliamentarian will even allow the votes to proceed.

“You have a growing number of Republicans, who regardless of where they may stand on this particular issue, are very nervous about the executive branch trampling over the independent powers of Congress,” said Van Hollen.