Loujain al-Hathloul will appear in a Saudi court Wednesday more than two years after she was first detained in a crackdown on human rights defenders. 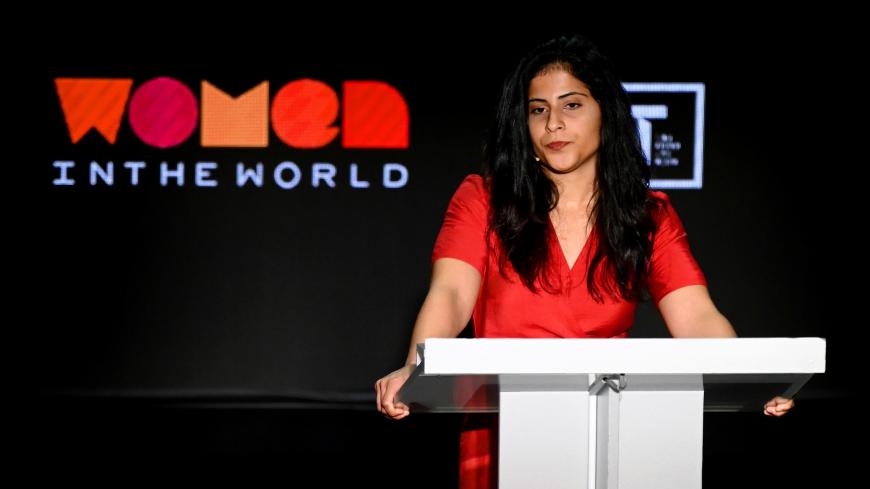 Lina al-Hathloul, whose sister Loujain is being held by Saudi authorities, speaks at the 10th Anniversary Women In The World Summit at David H. Koch Theater at Lincoln Center on April 10, 2019, in New York City. - Photo by Mike Coppola/Getty Images

Loujain al-Hathloul will stand trial in Saudi Arabia on Wednesday, her family said, nearly a month after the women's rights activist went on hunger strike to protest her prison conditions.

“We were just announced that @LoujainHathloul has a trial tomorrow,” her sister, Lina al-Hathloul, tweeted Tuesday.

“All we can hope for is that they release Loujain. I'm extremely nervous about tomorrow. But I’m also hopeful they release her. I really miss my sister. Not a second goes by that I don’t miss her,” Lina al-Hathloul told The Independent newspaper.

Weeks before Saudi Arabia lifted its ban on women driving, Hathloul and 10 other female activists were arrested in May 2018 as part of a sweeping crackdown on right-to-drive campaigners.

The conservative Gulf kingdom insists that Hathloul and the others are detained over national security concerns. Saudi Minister of State for Foreign Affairs Adel Jubeir told CNN last week that Hathloul's fate "was up to the courts.”

"The idea that she and her friends were detained because they advocated women's driving is preposterous," said Jubeir.

Hathloul’s court date was scheduled for March but was postponed indefinitely amid what Saudi officials said were coronavirus concerns. On Oct. 26, she began a hunger strike to protest her treatment in prison and lack of regular contact with her parents.

Amnesty International urged Riyadh to allow diplomats and journalists to attend the trial. The rights group also called for Hathloul to be given access to her parents, and to a lawyer so she can prepare an adequate defense.

“In light of the women rights activists reporting having been tortured or otherwise ill-treated in detention, we also have concerns about the admissibility of any ‘evidence’ that might be submitted in court tomorrow,” Lynn Maalouf, Amnesty’s deputy Middle East and North Africa director, said in a statement.

“The only just outcome for this trial would be the immediate and unconditional release of Loujain al-Hathloul," Maalouf said.

Her family says Hathloul has been tortured with waterboarding, electric shocks and sexual harassment and at times held in solitary confinement. In a 2019 New York Times op-ed, her sister Alia Hathloul wrote that during a family visit, Loujain “was shaking uncontrollably, unable to hold her grip, to walk or sit normally.”

The Saudi government denies the reports of torture.

On Tuesday, a group of 29 organizations issued a letter to the president of Saudi Arabia's Human Rights Commission, Awwad Al-Awwad, expressing their concern over the “continued arbitrary detention of women’s rights defenders.”

“These women have been wrongly detained simply for exercising their fundamental rights, and justice demands they be released,” the senators wrote Monday to Princess Reema, the kingdom’s first female ambassador to the United States.

Hathloul’s expected court appearance comes days after Saudi Arabia wrapped up its hosting duties for this year’s Group of 20 summit, of which women’s empowerment was a theme. Ahead of the virtual gathering, a coalition of human rights organizations sought to draw attention to what they say is an increase in repression under Crown Prince Mohammed bin Salman.

They also accuse Saudi Arabia of failing to provide accountability for Jamal Khashoggi, the Washington Post columnist who was murdered at the Saudi Consulate in Istanbul two years ago. Riyadh convicted eight unnamed defendants over his murder in what was widely seen as a sham trial.

Turkey on Tuesday resumed the trial in absentia of 20 Saudi officials accused of involvement in Khashoggi’s death. A friend of the journalist, Egyptian opposition activist Ayman Noor, testified that Khashoggi had been “threatened” by former royal court adviser Saud al-Qahtani. The Turkish trial has been adjourned until March.