Hathloul, who was arrested after campaigning for women's driving rights, had spent nearly three years in prison. 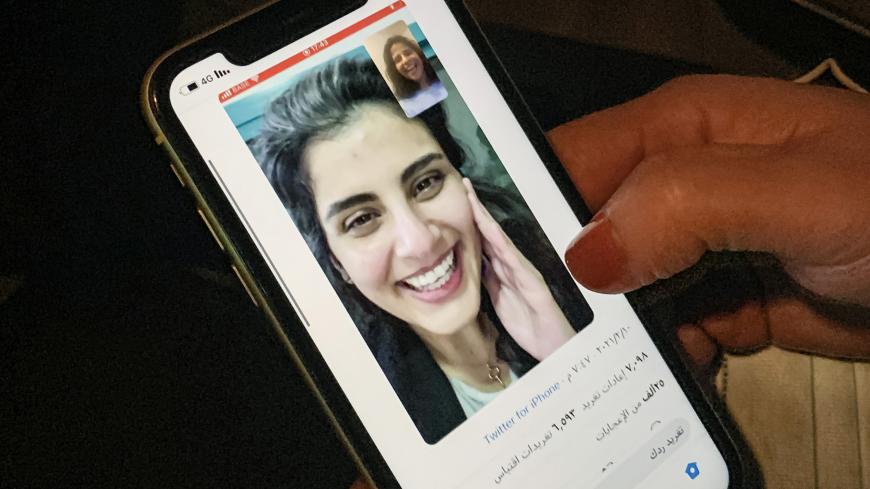 This picture taken Feb. 10, 2021, in Saudi Arabia's capital Riyadh shows a woman viewing a tweet posted by the sister of Saudi activist Loujain al-Hathloul, Lina, showing a screenshot of them having a video call following Hathloul's release after nearly three years in detention.

Loujain al-Hathloul, a prominent Saudi women’s rights activist, has been released after 1,001 days in custody, her family says.

Riyadh's Specialized Criminal Court, which handles terrorism cases, sentenced Hathloul in late December to more than five years in prison. Saudi authorities took into account the time she already served, her family said in a statement at the time, adding that Hathloul would remain on probation for three years after her release. She was also given a five-year ban on travel outside of Saudi Arabia.

Hathloul, 31, was arrested in May 2018 as part of a sweeping crackdown on activists campaigning for women’s driving rights and the end of Saudi Arabia’s restrictive male guardianship laws. A month after Hathloul's arrest, Saudi Arabia lifted the world’s only ban on women driving.

During her nearly three-year imprisonment, her family says Hathloul had been tortured with waterboarding, electric shocks and sexual harassment and at times held in solitary confinement.

In a statement, US-based advocacy group PEN America said it welcomed her release, but cautioned there may be restrictions on Hathloul’s rights.

“We have yet to be assured this is true freedom. Loujain may still have draconian limitations on her movement and, most poignantly, on her ability to speak out,” the group said.

Her release comes less than a week after a Saudi court ordered the temporary release of two US-Saudi nationals held as political prisoners. The new administration has pledged to hold Saudi Arabia accountable for its human rights record, with President Joe Biden vowing as a candidate to make the conservative country a “pariah” for its repression.