Biden administration officials are in discussions with lawmakers about revising the 2001 authorization for use of military force. 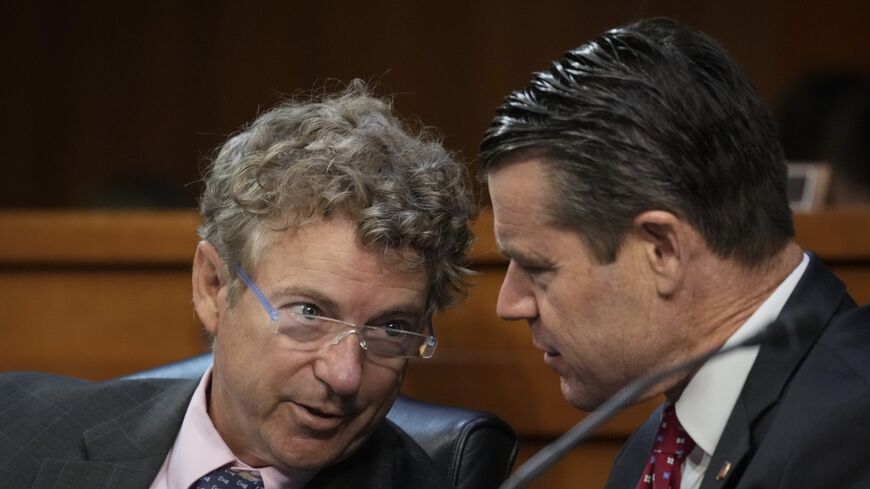 Republican Sens. Rand Paul of Kentucky and Todd Young of Indiana confer during a Senate Foreign Relations Committee business meeting on Capitol Hill on Aug. 4, 2021 in Washington. The committee met to discuss Senate Joint Resolution 10, which would repeal authorizations for use of military force against Iraq, among other things. - Drew Angerer/Getty Images

A bipartisan group of lawmakers on the Senate Foreign Relations Comittee voted Wednesday to advance a bill to repeal a 2002 law authorizing war against Iraq, clearing the way for a vote in the upper chamber expected before the end of this year.

Lawmakers voted 14-8 to advance the legislation just one day after senior Biden administration officials publicly insisted the 2002 authorization is no longer necessary for US operations in Iraq or the wider Middle East, even amid tensions with Iran.

If passed and then signed by President Joe Biden into law, the bill introduced by Sens. Tim Kaine, D-Va., and Todd Young, R-Ind., would also revoke the 1991 war authorization.

Both laws were intended to authorize military force against the Iraqi government of Saddam Hussein, which was deposed in 2003 by a US invasion more than a decade after his army was driven out of Kuwait by a Washington-led coalition.

In June, the House of Representatives passed a similar bill put forth by Democratic Rep. Barbara Lee of California. Senate Majority Leader Chuck Schumer, D-N.Y., who backs the repeal, reiterated Wednesday that the matter would be brought to a floor vote in the Senate before the end of this year.

The repeal has the backing of the Biden administration and top Democrats in Congress, as well as a number of Republicans.

Wednesday’s bipartisan vote is the latest sign the bill will be likely pass the Senate, despite concerns voiced by some GOP lawmakers that it could tie the military’s hands at a time of intense tensions with Iran-backed proxy groups in Iraq and Syria.

The US deputy secretary of state, Wendy Sherman, said Tuesday that overturning the 2002 law would not interrupt US operations in the Middle East.

Her testimony was backed up by the Pentagon’s top lawyer, Caroline Krass, and the State Department’s acting legal adviser, Richard Visek, who insisted the repeal would not hamper the military’s ability to respond in self-defense to attacks by Iran-backed militias in the region.

That authority is covered by the 2001 authorization for use of military force, which sanctions the US-led mission to defeat the Islamic State in Iraq and Syria.

Even the killing of Iranian Quds Force commander Qasem Soleimani, ordered by former President Donald Trump in January 2020, was carried out under the president’s authorities under Article II of the US Constitution, officials emphasized Tuesday. The 2002 authorization for use of military force was cited by the previous administration only secondarily, they said.

The Biden administration’s position on the repeal has put some Republicans in the awkward position of sticking up for war powers that the current administration says it does not need.

Republicab Sen. Mitt Romney of Utah, who helped lead a push for a classified briefing on the issue held last month with the Pentagon’s top Middle East policy official, questioned the witnesses on whether the repeal could limit Washington’s ability to respond to crises in the region, given the Biden administration’s withdrawal from Afghanistan and promise to end combat operations in Iraq by the end of the year.

Republican Sen. Bill Hagerty of Tennessee argued the repeal could be interpreted as a sign of weakness by Iranian officials amid indirect negotiations in Vienna to revive the 2015 nuclear deal with Tehran.

“I’m loath to remove an authority and not be prepared to put another in its place,” said Hagerty, who has co-authored another bill that would repeal the 1991 and 2002 laws while allowing the administration further leeway against armed groups in Iraq and the states that back them. Republican Sen. Ted Cruz of Texas echoed Hagerty’s concerns Tuesday.

Republican Sen. Rand Paul of Kentucky voiced disagreement with his colleagues Tuesday, siding with Democrats on the 2002 law. “Publicly ending the Iraq war, which has been over for a decade, is a great idea and shouldn’t be controversial,” Paul said Tuesday.

He also urged a repeal of the 2001 authorization for use of military force, saying “There’s no one left alive that had anything to do with 9/11.”

“We shouldn’t be in 14 different countries” under that law, he said. “They all should be repealed. And if people want to go to war, come and vote.”

The 2001 law explicitly authorizes the United States to use “all necessary and appropriate force” against those whom the president deems “planned, authorized, committed or aided” the Sept. 11, 2001, attacks.

The law has long been interpreted, however, to include “associates” of al-Qaeda, including the Islamic State, which split from al-Qaeda in 2014, as well as al-Qaeda’s African and Syrian franchises.

Sherman said administration officials have begun discussions with lawmakers about replacing and revising the 2001 law, including about potentially expanding the list of groups explicitly liable to be targeted under the law.

"Those are things that we are willing to discuss, as well as other things that the Senate might put on the table," Sherman said Tuesday, adding, "We are in support of continuing those discussions in a timely manner to reach a revised 2001 AUMF."

Some 2,500 US troops remain in Iraq in the wake of the multinational war against the Islamic State under the 2001 authorization for use of military force; the Americans continue to train and advise Iraq’s military. Now that the Islamic State has largely been defeated on the ground, the greatest threat to US personnel in Iraq is Iran-backed militias, military officials have said.

Administration officials say the United States has no plans to withdraw the bulk of US troops from Iraq in the foreseeable future, despite Biden’s promise to remove combat troops.

The head of US forces in the Middle East, Gen. Kenneth “Frank” McKenzie, said in April that the US Central Command would be able to conduct strikes against the Islamic State from outside Iraq if ever ordered to withdraw.