Congressional efforts to update the president’s powers to fight terrorists are running into resistance from Democrats worried about the administration’s hawkish turn. 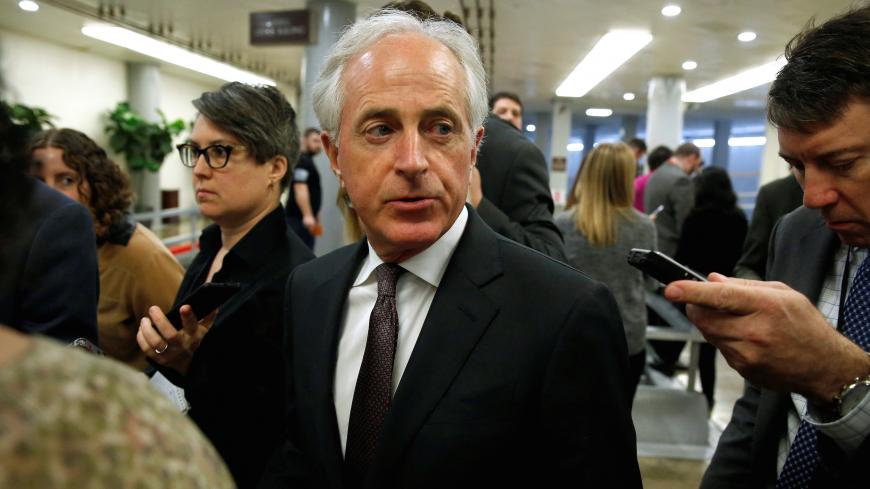 Congressional efforts to update the president’s ability to battle terrorist groups are running into resistance from Democrats and anti-war groups worried about the Donald Trump administration’s hawkish turn.

While lawmakers of both parties have long sought to update the 2001 law that has served as the legal underpinning for war on terrorism operations around the globe, critics worry the latest effort inadvertently increases rather than limits the president’s military powers. Some even argue that the bill from Senate Foreign Relations Committee Chairman Bob Corker, R-Tenn., and Sen. Tim Kaine, D-Va., could even be used to justify attacking Iran.

At a hearing this week, the committee’s top Democrat, Sen. Robert Menendez of New Jersey, said the new authorization for the use of military force could allow Trump to “start a war with Iran.”

The May 8 White House statement withdrawing the United States from the Iran nuclear deal, Menendez pointed out, “stated that the Taliban and al-Qaeda were proxies of Iran. If in fact [Trump] says that the Taliban and al-Qaeda are proxies of Iran and wants to pursue those or any other entities in another country, there is no provision that stops him from pursuing those entities in another country.”

The original 2001 law only authorizes the president to attack countries and organizations that “planned, authorized, committed or aided” the Sept. 11, 2001 attacks. Opponents of the new bill argue that by legally formalizing the president’s ability to expand counterterrorism operations into new countries, the Corker bill codifies legal arguments used to expand military action to other countries and other terrorist groups, such as the Islamic State in Syria.

“There is a real danger of the kind of creative executive branch lawyering that we’ve seen under the 2001” authorization for the use of military force, said Rita Siemion, an adjunct law professor at Georgetown University and legal counsel at Human Rights First.

Responding to Menendez’s concerns about an attack on Iran, Siemion said, “I don’t think that would be an appropriate reading, but I think there is reason to be concerned that the president might try to do so.”

During his speech announcing the US withdrawal from the Iran deal, Trump said the “Iranian regime is the leading state sponsor of terror. It exports dangerous missiles, fuels conflicts across the Middle East and supports terrorist proxies and militias such as Hezbollah, Hamas, the Taliban and al-Qaeda.”

Iran has previously hosted and negotiated with al-Qaeda operatives and Osama bin Laden’s family members. Last year, Mike Pompeo, when he was still CIA director, declassified documents appearing to partially confirm that relationship as the Trump administration sought to build a case to withdraw from the deal. Pompeo is now secretary of state.

NATO forces fighting in Afghanistan have previously said they’ve interdicted Iranian weapons shipments to the Taliban. The Afghan government alleges that Tehran continues to support the Taliban in order to halt the construction of hydroelectric dams that could inhibit the water flow to Iran, which suffers from an extreme water shortage.

Congress could then retroactively order the US military to disengage from hostilities, which in practice would likely require a veto-proof majority. Some critics argue the new bill cedes too much power to the president on the front end by allowing him to designate new terrorist groups and countries as military targets without congressional approval.

“What makes more sense — hold the vote before the president is in the field with the forces in order to open the door?” asked Sen. Jeff Merkley, D-Ore. “Or hold the vote afterward, at which point it not only is after the action, but it requires a super majority?”

Merkley has vowed to introduce an alternative bill soon and issued a list of principles that it would adhere to. These include requiring Congress to “authorize new military action rather than delegating this power to the president” as well as limiting the use of ground forces while having the authorization expire after three years. The bill would also “require that the United States adhere to international law, including the proportional use of force and distinguishing between combatants and civilians.”

The Corker-Kaine bill includes none of these provisions. It does, however, provide Congress with the opportunity to repeal or modify the authorization for the use of military force every four years under expedited procedures, starting in 2022.

Earlier this week, Reps. Barbara Lee, D-Calif., and Walter Jones, R-N.C., led 50 predominantly Democratic House members in a letter to Corker and Menendez expressing opposition to the Senate’s authorization for the use of military force proposal. Like Merkley, they demanded more stringent requirements.

Anti-war groups that have previously backed efforts to repeal the 2001 authorization for the use of military force have rallied around Merkley’s alternative proposal.

“Though we believe the existing AUMF [authorization for the use of military force] should be repealed and not replaced, we know there are those in Congress that believe a new authorization is necessary,” Kate Kizer, the policy director for Win Without War, a coalition of anti-war groups, told Al-Monitor. “To that end, we’re glad Sen. Merkley is taking a principled and narrow approach to authorizing the use of force, compared to the endless war AUMF being offered by Sens. Corker and Kaine.”

The emerging opposition to the new authorization for the use of military force from anti-war groups, Democrats and libertarian-leaning Republicans has irritated Corker, who did not mince words while expressing his feelings at the hearing.

“We are exercising our constitutional rights if we pass this,” said Corker. “This is the biggest red herring I’ve ever heard in my life. We would be authorizing the use of military force, and I just find some of these liberal groups and the way they’re attacking this as almost hilarious.”

Corker noted that had his proposal been adopted in 2001, Congress would have had the opportunity to hold at least 13 war authorization votes since then. Supporters of his bill also argue that it would require the White House to be more forthcoming in disclosing its overseas military operations to Congress, thereby allowing the legislative branch to claw back at least some of its war-making authority from the White House.

For instance, Corker bill co-sponsor Jeff Flake, R-Ariz., expressed his preference for requiring Congress to vote before the president designates a new military target as well as adding an expiration date. However, he acknowledged the challenge inherent in mustering enough support for a rewrite of the 2001 law.

“We have to judge this product against the reality and not what is optimal,” said Flake. “I’m also sensitive to the fact that this is a bipartisan institution. The Senate requires 60 votes and you take what you can get sometimes.”