Egypt interprets Russian reluctance to back its position in the GERD dispute as pro-Ethiopian, but Moscow says it is pursuing a balanced position between Cairo and Addis Ababa. 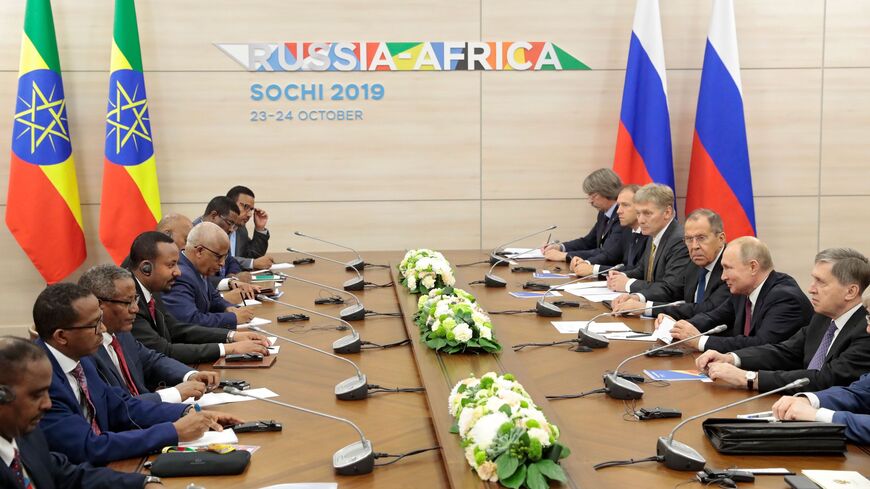 Russia has denied taking Ethiopia’s side in its dispute with Egypt over a massive dam built by Addis Ababa on the Blue Nile, a main tributary of the Nile River.

While Ethiopia, an upstream nation, says the Grand Ethiopian Renaissance Dam (GERD) is key to its economic development, Egypt fears the giant dam will imperil its water share from the Nile River, the country’s main source of fresh water. Egypt and Sudan, two downstream countries, have been seeking to reach a legally binding agreement with Ethiopia on the filling and operation of the GERD, a demand rejected by Addis Ababa.

As African Union-sponsored negotiations failed to produce any breakthrough, Egypt and Sudan requested a UN Security Council session on July 8 in an attempt to settle the decade-long dispute with Ethiopia.

During the session, Russia’s delegate to the United Nations, Vasily Nebenzya, cautioned that the statements of a possible use of force to protect Egypt’s water rights should be avoided. The speech, however, was seen in Cairo as Russian support to the Ethiopian position in the GERD dispute.

But Russian Ambassador to Egypt Georgy Borisenko denied that his country supports Ethiopia in the GERD dispute, blaming the perception that Moscow was siding with Addis Ababa on “the misinterpretation of the Russian speech.”

He said in an interview with TEN TV that Russia, like other member states of the UN Security Council, thinks that the council was not the best venue for discussing water disputes. “Our position is balanced as both Egypt and Ethiopia are partners to Russia,” he said.

Borisenko explained that Moscow understands that the Nile River is a “truly existential issue” for Egypt, saying, “We understand the concerns of the Egyptian friends about the construction of the Renaissance dam.”

The Russian diplomat said his country is ready to work with Ethiopia to reach a negotiated agreement on the GERD. “We are ready to assist in this effort, including working with Addis Ababa to reach a mutually acceptable agreement at the negotiating table.”

A few days after the UN Security Council session, on July 12, Russia signed a military cooperation agreement with Ethiopia, raising eyebrows in Cairo.

The Russian envoy described the signing of the military agreement with Ethiopia days after the session as a “mere coincidence.” “The military cooperation deal is a framework agreement. It is one of routine agreements that Russia has signed and will sign with many of the world’s countries,” he said.

On July 24, the Russian Foreign Ministry denied any link between the military agreement with Ethiopia and the GERD dispute with Egypt, saying the deal “doesn’t have any destabilizing character” and is similar to joint cooperation agreements signed with other countries, including Egypt and Sudan.

Rakha Hassan, a former assistant foreign minister and member of the Egyptian Council for Foreign Affairs, said Russia is maintaining a neutral position regarding the GERD dispute. “Russia has major interests in Ethiopia and does not want to lose any influence there,” Hassan told Al-Monitor by phone.

The former diplomat said Egypt should continue to mobilize major countries such as the United States, Italy, China and Russia to pile pressure on Ethiopia to help reach an agreement on the GERD. He said, “The GERD is a national security issue for Egypt. If the dispute is not solved peacefully, the situation will spiral out of control, something which Egypt does not seek.”

A research paper by the Center for Arab-Eurasian Studies attributed Russia’s support for Ethiopia to Moscow’s efforts to expand its influence on the African continent, taking advantage of the US estrangement with Addis Ababa over the Tigray conflict.

“Russia is still groping its way in the African continent and does not have the influence to impose its own vision to resolve any conflict, especially in a complex and protracted issue such as the GERD,” the paper read. “Whether Moscow supported the position of Cairo or Addis Ababa, this will not change anything, but Russia adheres to what appears to be a neutral position that carries with it support for the Ethiopian vision, and with it Moscow can achieve several gains for its national interests.”

Samuel Ramani, a tutor of international relations at the University of Oxford, said Russia considered a mediation role in the GERD dispute in 2019. He told Al-Monitor, “Russia, however, realized that Ethiopia is averse to any form of external mediation and that any attempt to arbitrate will just antagonize Ethiopia and produce no constructive results.”

“Egypt interprets Russia's reluctance to back its position in the UN Security Council as Moscow being pro-Ethiopian, but in reality, Russia is trying to balance between Cairo and Addis Ababa.”

Ramani believes that the progress on the Russian nuclear plant in Egypt, the resumption of Russian flights to Egyptian resorts and reports about Russian plans to expand its trading access to the Suez Canal “suggest that Egyptian officials are compartmentalizing their disagreements with Russia on the GERD, even if they are frustrated with Moscow's stance.”

“Back in 2019, Russia viewed mediation as the best way to balance closer ties with Egypt and Ethiopia. Now it realizes that mediation will actually undermine its balancing strategy. So Russia is pursuing a course of non-intervention in the GERD dispute, which is not unlike what the US and China are doing, and I don't see that position changing.”