Kuwait is also receiving people evacuated from Afghanistan by the US military amid the chaotic withdrawal from the country. 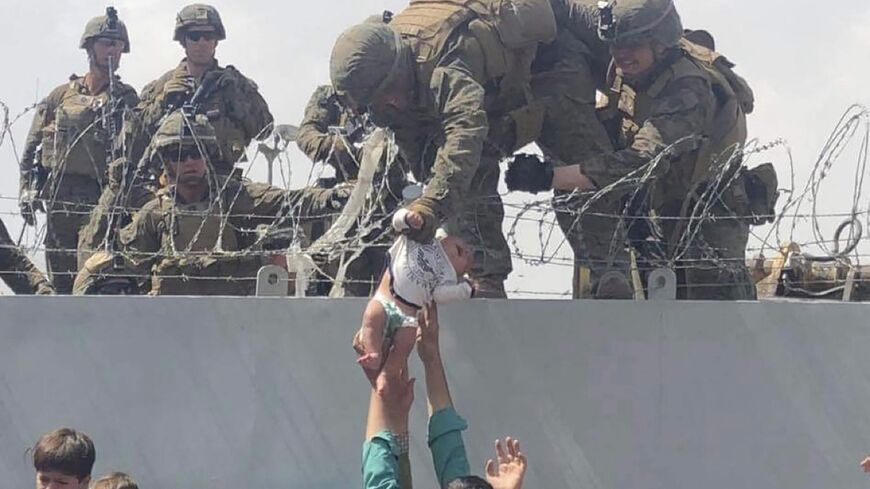 A US Marine grabs an infant over a fence of barbed wire during an evacuation at Hamid Karzai International Airport in Kabul on Aug. 19, 2021. A Pentagon official said Friday that US evacuation operations from Kabul's airport have been stalling because the receiving base in Qatar is overflowing and could not receive evacuees. "There has been a considerable amount of time today where there haven't been departures," Brig. Gen. Dan DeVoe of the US Air Mobility Command told reporters. - OMAR HAIDIRI/Courtesy of Omar Haidiri/AFP via Getty Images

“I am grateful to see our friends and allies in Qatar be moral exemplars by accepting Afghans ultimately seeking safe haven in the U.S. after being forced to escape for their lives,” said Sen. Bob Menendez of New Jersey in a statement.

Thousands of Afghanis who worked for the US military in Afghanistan are waiting for their visa applications to be processed to the United States. Many fear staying behind in Afghanistan after the Taliban takeover since they worked for the enemy American forces. Diplomats are processing the visas at Kabul’s airport since the US Embassy closed in the now Taliban-controlled city.

Many US citizens, embassy staff and at-risk Afghans went to Qatar after being evacuated from Kabul in recent days. Qatar agreed to host the Afghans while they wait for a final destination, also leading to praise from the US State Department.

Kuwait has also agreed to receive passengers from Afghanistan en route to wherever they ultimately end up, according to the State Department.

US President Joe Biden’s withdrawal from Afghanistan has been widely criticized in the United States. In an earlier statement, Menendez said the Senate Foreign Relations Committee “will continue fulfilling its oversight role” and hold hearings on “the Biden administration’s flawed execution of the U.S. withdrawal.” Menendez, who heads the committee, said the hearing would also address the previous Trump administration’s “flawed” negotiations with the Taliban.

Other senators have criticized the administration over the fact that many Americans remain trapped behind Taliban lines.

“President Biden’s ill-planned, chaotic withdrawal from Afghanistan has stranded thousands of American citizens behind enemy lines, turning them in effect into hostages of the Taliban,” said Republican Sen. Tom Cotton of Arkansas in a statement.

"My office has received numerous reports of American citizens and Afghan allies being harassed, beaten, and abused by Taliban thugs,” added Cotton, who served in the US military in Afghanistan.

Qatar has a long history of involvement in Afghanistan. Doha has hosted intra-Afghan peace talks several times in recent years. Some senior Taliban leaders also based themselves in Qatar until recently. Qatar also hosts a US military base.

In response to the recent Taliban victory, the Qatari government called for peace and protection of civilians. Qatar was not among the Gulf states to recognize the Taliban government that ruled Afghanistan before the 2001 US invasion.