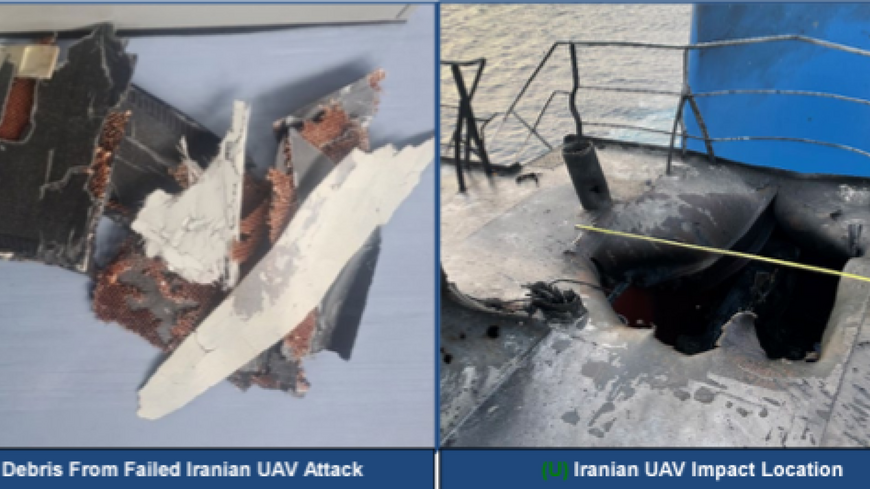 The US Central Command released these photos of a hole left by a unmanned aerial vehicle and debris from a drone attack in a report. CENTCOM said there was a "confluence of multiple components with very specific and matching identities to previously exploited (and known) Iranian one-way attack UAVs." - CENTCOM

The US military on Friday revealed new details of its investigation into what it called a "deliberate attack" by Iran on an Israeli-linked tanker ship that left two people dead in the Gulf of Oman last week.

An investigation by US Central Command found the oil products tanker Mercer Street was targeted by two drones July 29, several hours before a third drone “loaded with a military-grade explosive” penetrated the ship’s pilot house, leaving a six-foot diameter hole and killing the Romanian captain and a British security officer.

“The distance from the Iranian coast to the locations of the attacks was within range of documented Iranian one-way attack [drones],” the military said in a press release.

A team of US Navy explosive experts deployed by helicopter to the Mercer Street from the USS Ronald Reagan aircraft carrier. Once onboard, they recovered components of the drones, which were determined to be “nearly identical” to previously recovered Iranian models, CENTCOM said.

UK and Israeli investigators concurred with the conclusion, according to the release, after the UK experts “were provided access to the evidence” at US 5th Fleet headquarters in Manama, Bahrain, while the Israeli experts observed the evidence “virtually.”

Chemical tests for explosives at the site revealed the presence of RDX, a nitrite-based explosive commonly used for military purposes.

“Iran was actively involved in this attack,” CENTCOM said.

The Mercer Street incident follows a series of ship seizures and sabotage attacks in the Gulf region in recent years amid intense tensions between the US and Israel on one side, and Iran on the other. The ship is the latest of at least five vessels with ties to Israel believed to have come under attack in the past year.

Israel has conducted a number of sabotage attacks in recent years against Iranian cargo ships, largely reported to be tankers delivering oil to Syria in violation of international sanctions.

Israel has also carried out hundreds of airstrikes against suspected Iran-linked targets inside Syria, largely to prevent precision-guided missile kits from approaching Israel’s border. The United States began providing intelligence support to the Israeli air campaign as early as 2018.

The attack on the Mercer Street comes as Biden administration officials seek to resume stalled negotiations with Iranian officials in Vienna over ways to curtail Tehran's nuclear program in exchange for sanctions relief.

Iran’s government has denied involvement in the incident, despite the allegations by the US, UK and Israel. Romania has demanded answers from Iran’s government, citing information provided by its allies.

US Secretary of State Antony Blinken on Monday vowed a “collective response” to the attack.

"I emphasized to my international friends that now is the time for deeds — words are not enough,” Gantz told the ambassadors of UN Security Council member states Wednesday alongside Foreign Minister Yair Lapid.

“It is time for diplomatic, economic and even military deeds — otherwise the attacks will continue,” Gantz said.

Gantz spoke with US Defense Secretary Lloyd Austin about the Mercer Street incident by phone Friday.

The two “expressed concern about Iran’s proliferation and employment of one-way attack UAVs across the region and committed to cooperating closely on regional security,” according to the Pentagon’s statement. UAV is an abbreviation for unmanned aerial vehicle.

“They agreed to work together alongside allies and partners in condemning Iran’s aggression that undermines freedom of navigation, and they exchanged views on next steps,” the statement read.