Iran's conflicts with its neighbors once again loom over Biden's ambitions to return to the Iran deal. 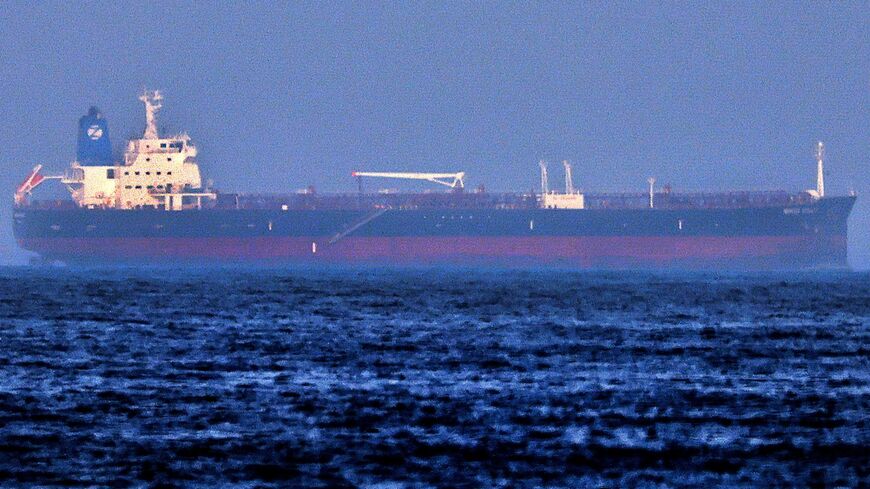 Will the United States participate in a retaliatory attack over the July 29 fatal drone attack on the oil tanker MV Mercer Street? The Israeli-linked, Japanese-owned tanker is seen on Aug. 3, 2021, off the port of the Gulf Emirate of Fujairah in the United Arab Emirates. - KARIM SAHIB/AFP via Getty Images

The Pentagon has not ruled out playing a role in the “collective response” promised by the Biden administration to a drone attack on an Israeli-owned shipping vessel last week in the Gulf of Oman.

The attack, which US, UK and Israeli officials have blamed on Iran, killed two people: the ship’s Romanian captain and a British crew member.

“A coordinated response doesn’t have to be a military response,” Pentagon spokesman John Kirby told reporters Tuesday, before adding, “Certainly we’ll do what we need to do to protect our forces and our interests.”

US Secretary of State Antony Blinken on Monday called Thursday's strike on the MV Mercer Street “a direct threat to freedom of navigation and commerce” and said Iran’s government continues to show “tremendous irresponsibility” by pursuing such attacks.

UK Prime Minister Boris Johnson has called the attack “outrageous” and said Iran must “face up to the consequences.” Israeli Defense Minister Benny Gantz told the members of the Knesset on Monday that Iran’s proliferation of drones and missiles “poses an immediate danger” in the region and that Israel must “act now” to respond.

The head of US forces in the Middle East, Gen. Kenneth “Frank” McKenzie, spoke on the phone with the Israeli military’s chief of staff, Lt. Gen. Aviv Kochavi, on Monday.

The two discussed “recent events in the Middle East and cooperation between the countries,” the Israel Defense Forces said in a statement.

The lethal drone attack comes after a series of Israeli sabotage attacks against Iranian tankers delivering petroleum to Syria in violation of international sanctions. Israel has also conducted hundreds of airstrikes inside Syria against suspected Iran-linked targets, largely to prevent precision-guided missile kits from falling into the hands of Iranian proxy groups near Israel’s borders.

The United States began providing military and intelligence assistance for Israel’s air campaign during the Trump administration in 2018, but the quiet conflict now threatens to scuttle the regional ambitions of the Biden administration.

Washington's talk of a collective response comes as current officials aim to take advantage of what some see as a narrowing window to resume stalled negotiations with Iran to curb its nuclear program in exchange for sanctions relief.

White House press secretary Jen Psaki said Tuesday that the administration is "fully committed" to returning to the indirect talks with Iranian officials in Vienna.

Mick Mulroy, the Pentagon’s former top policy official for the Middle East, told Al-Monitor that the planned response will likely be "calculated so as not to escalate the current situation but still send a message that this type of reckless and deadly action against a civilian vessel will not be tolerated."

President Joe Biden has twice authorized airstrikes against Iran-backed militia positions in Iraq and Syria for rocket and drone attacks on US forces in Iraq.

Neither those strikes nor the Trump administration's stance toward Tehran have halted militia attacks against US personnel in Iraq, Deputy Secretary of State Wendy Sherman told lawmakers Tuesday.

One former senior US official suggested the Biden administration could opt for a “deniable” response to the Mercer Street incident, “something that Iran knows was the US, but isn’t something that would derail the JCPOA negotiations.”

A cyberattack “could do a lot of damage but would not be so escalatory,” said the former official, who had knowledge of prior such operations.

The Trump administration reportedly carried out a cyberattack against Iran following the 2019 drone and cruise missile attack on Saudi Arabia’s Abqaiq and Khurais oil facilities.

Also Tuesday, the United Kingdom’s Maritime Trade Organization (MTO) reported that a Panama-flagged bitumen tanker, the Asphalt Princess, may have been the target of a “potential hijack” in the Gulf of Oman, some 60 nautical miles east of the Emirati port city of Fujairah. The MTO cited third-party sources in the report.

The Times of London also cited government sources in the UK as saying the Asphalt Princess had been hijacked by a group of eight or nine armed men. The Times reported its sources were “working on the assumption that Iranian military or proxies boarded the vessel.”

Kirby on Tuesday could not confirm reports of the hijacking.

The Oman Maritime Security Centre also said it had received word that the Asphalt Princess had been subject to a “hijacking incident,” Reuters reported.

The Omani military deployed ships and aircraft near the area in response to the situation, according to the statement.

On Wednesday the British military-affiliated MTO reported that the potential hijack of the Asphalt Princess, which it described as a “non-piracy” incident, had ended.

“Boarders have left the vessel,” the MTO tweeted. “Vessel is safe.”

Earlier Tuesday, Reuters reported that at least five ships in Gulf waters reported their vessels were “not under command” — a status indicating the captain and crew are unable to control the ship’s movement. It was not immediately clear whether the reports were related to the reported seizure of the Asphalt Princess.

Iran’s military and Islamic Revolutionary Guard Corps firmly denied involvement in the incidents in the Gulf on Tuesday.