The British military said a bitumen tanker off the coast of the UAE experienced a "potential hijacking," prompting a denial from Iran. Israel and the UK also blamed Iran for a drone attack last week that killed two crew members on an oil tanker. 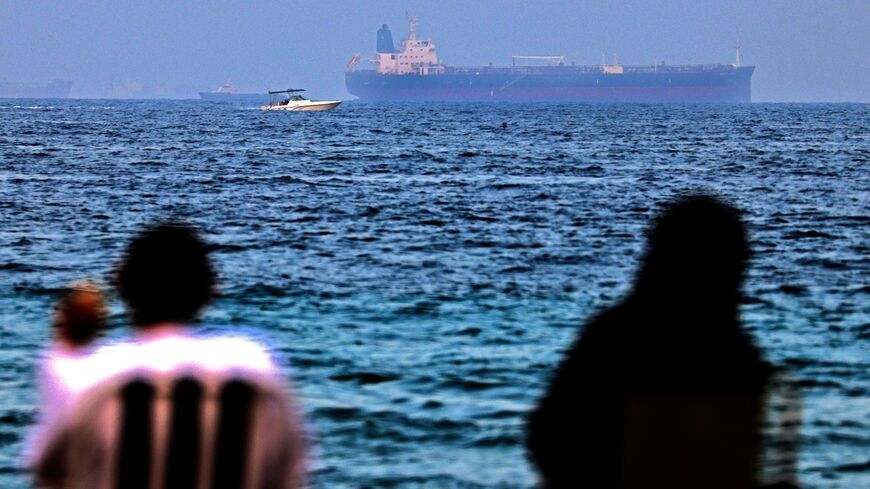 The damaged tanker MV Mercer Street is seen off the port of the Gulf Emirate of Fujairah in the United Arab Emirates on Aug. 3, 2021. Authorities reported that another tanker, the Asphalt Princess, may have been seized in the area the same day the photo was taken. - KARIM SAHIB/AFP via Getty Images

The United Kingdom Maritime Trade Operations reported the “incident” off the coast of the Emirati city of Fujairah. The operations center later said the event was a “potential hijack” without providing further details, The Associated Press reported. Reuters, quoting maritime security sources, later said the Panamanian-flagged tanker Asphalt Princess had been seized by Iranian-backed forces.

The ship was in the Gulf of Oman between Oman and Iran late Tuesday night, according to the maritime tracking website MarineTraffic. The tanker set sail from Khor Fakkan in the the United Arab Emirates and was en route to the Omani city of Sohar, per the website.

The incident followed an attack on the Japanese-owned, Liberian-flagged oil tanker Mercer Street on Thursday that killed two crew members: one British and one Romanian. The ship is managed by the United Kingdom-based company Zodiac Maritime, which is owned by Israeli businessman Eyal Ofer. Both Israel and the UK subsequently blamed Iran for the incident, and said it was a drone attack. Iran summoned British and Romanian diplomats in response.

Later Tuesday, the Iranian Foreign Ministry denied "rumors about the entry of the country’s military forces into foreign ships passing in the Persian Gulf,” the semi-official Press TV reported, saying the allegations were propagated by “Western and Zionist media.”

Pentagon spokesman John Kirby would not confirm the maritime trade operations center’s claim Tuesday, but also did not rule out the military’s potential involvement in the proposed response to last week’s drone attack on the Mercer Street.

“A coordinated response doesn’t have to be a military response,” Kirby told reporters, before adding, “Certainly we’ll do what we need to do to protect our forces and our interests.”

The head of US forces in the Middle East, Gen. Kenneth “Frank” McKenzie, spoke on the phone with the chief of staff of the Israel Defense Forces (IDF), Lt. Gen. Aviv Kochavi, on Monday, the US military said on Twitter. The IDF also confirmed the two military leaders spoke about recent events in the region in a tweet.

Neither the UAE nor Oman immediately commented on the issue. Omani Foreign Minister Sayyid Badr Hamad al-Busaidi had met his Iranian counterpart Mohammad Javaf Zarif on Tuesday to discuss strengthening ties between the countries, according to the official Oman News Agency.

Tensions have been brewing in the Gulf throughout 2021. There were three other attacks on Israeli ships earlier this year in the strategic waterway. In early July, a ship previously owned by Zodiac Maritime was targeted in the Indian Ocean.

Elsewhere, Iran-backed militias in Iraq have also been attacking US troops in the country, which has prompted retaliatory US airstrikes. Iran also accused Israel of sabotaging one of its nuclear facilities in June.

The United States vowed to respond to the attack that killed the British and Romanian crew members. The incidents could also affect US efforts to negotiate a return to the Iran nuclear deal.