The G7 foreign ministers said there was no justification for the drone attack, which came days before the suspected Iranian hijacking of a ship in the Gulf of Oman. 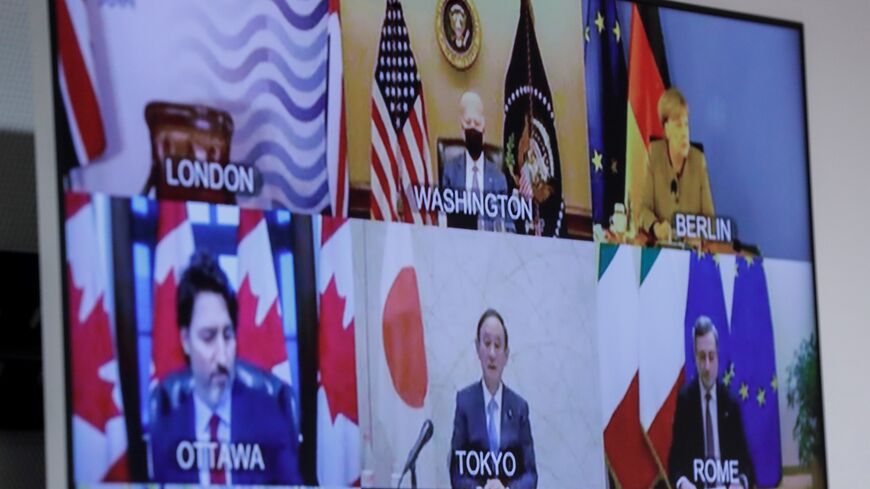 Heads of state are seen on a screen as European Commission President and European Council President take part in the Online G7 Summit from European council headquarters in Brussels, on Feb. 19, 2021. - OLIVIER HOSLET/AFP via Getty Images

The Group of Seven (G7) largest advanced economies condemned on Friday what they concluded was an Iranian attack on an Israeli-linked vessel in the Arabian Sea last week.

Suspected Iranian drones struck the Liberian-flagged Mercer Street, a Japanese oil tanker that was traveling from Tanzania to the United Arab Emirates. The vessel is managed by the London-based Zodiac Maritime, which is owned by Israeli billionaire Eyal Ofer.

Tehran denied involvement in the attack off the coast of Oman, which killed one British and one Romanian crew member. The Iranian Foreign Ministry said the allegations against Iran were “baseless.”

“This was a deliberate and targeted attack, and a clear violation of international law,” said the foreign ministers of Canada, France, Germany, Italy, Japan, the United Kingdom, the United States and European Union.

“All available evidence clearly points to Iran. There is no justification for this attack,” they said.

On Monday, Secretary of State Antony Blinken pledged a “collective response” to the Mercer Street attack in coordination with the United Kingdom, Israel, Romania and other countries.

On Tuesday, less than a week after the fatal drone strike, the Panama-flagged Asphalt Princess tanker was briefly hijacked off the UAE coast. State Department spokesperson Ned Price said on Wednesday that the United States believes a group of Iranians boarded the vessel but was not in a position to confirm.

The foreign ministers said on Friday that ships should be able to “navigate freely in accordance with international law” without threats of “irresponsible and violent acts.”

“We call on Iran to stop all activities inconsistent with relevant UN Security Council resolutions, and call on all parties to play a constructive role in fostering regional stability and peace," they said.

In a closed-door meeting on Friday, the UN Security Council discussed the maritime incidents, which come as talks to revive the landmark nuclear accord remain deadlocked. Negotiations in Vienna stalled in June following the election of Iranian President Ebrahim Raisi.

The hard-line new president, who was sworn in on Thursday, called for Washington to lift crippling sanctions and said Iran would “support any diplomatic initiative that helps achieve this goal.” US President Joe Biden has pledged to reenter the 2015 deal abandoned by his predecessor that granted Iran sanctions relief in exchange for curbing its nuclear ambitions if Tehran rolls back its violations.