Secretary of State Antony Blinken said the United States is confident that Iran carried out the attack on the Israeli-linked oil tanker. 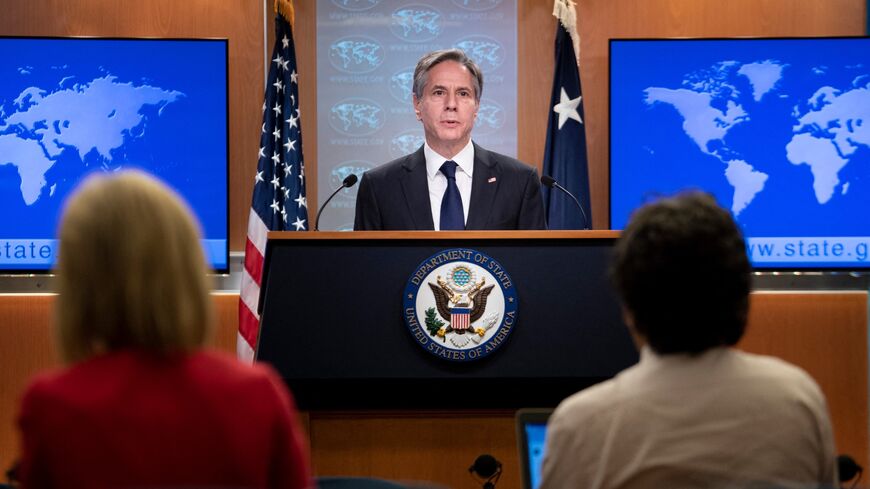 US Secretary of State Antony Blinken speaks at a briefing at the State Department on Aug. 2, 2021, in Washington. During the briefing, he renewed his vow of a "collective response" against Iran after Tehran was blamed for an attack on an Israeli-linked tanker. - BRENDAN SMIALOWSKI/POOL/AFP via Getty Images

The United States is “confident” that Iran is responsible for an attack on an Israeli-linked oil tanker that killed two crew members off the coast of Oman last week, US Secretary of State Antony Blinken said Monday.

“I want to condemn again the attack on Friday against the commercial ship. … We’ve conducted a thorough review and we’re confident that Iran carried out this attack,” said Blinken during a State Department briefing.

The United States and the United Kingdom have concluded that one or more Iranian drones were used to target the MV Mercer Street, a Japanese oil tanker managed by a UK-based company owned by Israeli billionaire Eyal Ofer. Officials said a British sailor and the ship's Romanian captain died in the attack near the Omani island of Masirah as the ship was traveling from Tanzania to the United Arab Emirates.

“Iran continues to act with tremendous irresponsibility,” Blinken said. “We are in very close contact, in coordination, with the United Kingdom, Israel, Romania and other countries. ... There will be a collective response."

The UK and Romania responded to the suspected Iranian attack by summoning their respective Iranian ambassadors Monday; the Iranian Foreign Ministry then summoned the British charge d'affaires in Tehran.

Iran has denied involvement in the attack, with Foreign Ministry spokesman Saeed Khatibzadeh describing the reports as “baseless.”

Israeli Prime Minister Naftali Bennett also blamed Iran for the attack on the Mercer Street and described the Iranian government’s denials as "cowardly." The incident is one of several maritime attacks blamed on Iran in recent months, including a March missile strike on an Israeli-owned cargo ship in the Arabian Sea. On July 3, a ship previously owned by Ofer’s Zodiac Maritime company was attacked in the northern Indian Ocean.