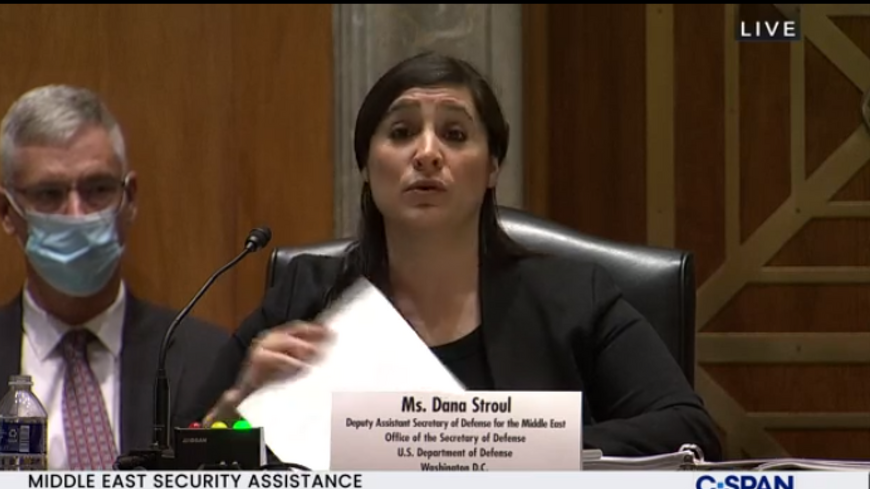 Dana Stroul, the deputy assistant secretary of defense for the Middle East, speaks before the Senate Foreign Relations Committee in Washington on Aug. 10, 2021. - Screenshot taken from C-SPAN

Tehran has been sending increasingly complex weapons to Yemen’s Houthi rebels even as Iranian officials have engaged in separate talks with the United States and Saudi Arabia about reducing tensions in the region, a top Pentagon official said Tuesday.

“In the Yemen context, we have seen more attacks from the Houthis launched at Saudi Arabia in the first half of this year than we have for several prior years,” Dana Stroul, the Pentagon’s top official for policy in the Middle East, told lawmakers on the Senate Foreign Relations Committee on Tuesday.

“Iran is increasing the lethality and complexity of both the equipment and the knowledge it transfers to the Houthis so that they can attack Saudi territory [and] Saudi civilians,” Stroul told lawmakers.

Yemen’s Houthi rebels, whom Western officials say have received support and training from Iran’s Islamic Revolutionary Guard Corps, have continued to launch ballistic missile and drone strikes into Saudi Arabia in recent years in response to the Riyadh-led military campaign in support of the Yemeni government. The technology also comes from Iran, American officials have said.

Stroul's comments come as top Iranian and Saudi officials are reportedly set to meet in Baghdad along with other regional representatives later this month. Saudi and Iranian officials held preliminary talks focused alleviating tensions between their sides in Baghdad earlier this year.

Meanwhile, the diplomatic push led by the Biden administration to end Yemen’s civil war remains stalled. The Iran-linked Houthi rebels continue to ignore a cease-fire proposed by Saudi Arabia in March, pushing for further territorial gains on the ground after capturing a majority of Yemen’s population centers in recent years.

The Houthis have demanded a complete end to the Saudi-led blockade of Yemen, which rights’ groups say has worsened the war’s humanitarian crisis — the world’s worst, according to the United Nations.

The Biden administration is still counting on the rebels to come to the table for peace talks, Yemen envoy Timothy Lenderking told reporters Monday.

“The Houthis are not winning in Marib,” Lenderking said in reference to a stalemated rebel offensive against one of the last cities under government control.

“And when that reality dawns on people, dawns on the Houthis, I think it will force them to realize that the continued isolation and the fact that the conflict is more of a stalemate, it will pull them back, and I hope bring them to the negotiating table,” he said.

The US is urging the Saudis to allow more fuel shipments into Hodeida, the envoy noted.

The Biden administration said in February it ended US support for Saudi-led military operations in Yemen in response to criticism over the humanitarian catastrophe caused by the war, but US contractors continue to maintain the Royal Saudi Air Force amid its campaign in Yemen, something a number of current Biden administration officials criticized publicly during the Trump administration.

The United States, the UK and Israel say Iran was also behind a deadly drone strike on a commercial tanker in the Gulf of Oman last month. US Central Command last week publicly revealed evidence that it said demonstrated Iran’s involvement in the attack on the ship, called the Mercer Street.

The July 29 attack killed the ship’s Romanian captain and a British security officer. Iran’s government has denied responsibility for the incident.

Asked by Republican Sen. Todd Young of Indiana on Tuesday whether she could confirm information that the drone that struck the Mercer Street was launched from Yemen, Stroul said, "Yes, I can confirm the reports. … This was an Iran-backed, one-way drone attack on the Mercer Street.”

Pentagon Press Secretary John Kirby later walked her statement back, tweeting that Stroul had not confirmed the Yemen link but rather was referring to the CENTCOM investigation, which did not mention Yemen.

"She didn't confirm or deny anything," a Defense Department source told Al-Monitor on the condition of anonymity.

CENTCOM last week said the Mercer Street attack occurred "within range" of the previous attacks believed to have been launched from the coast of Iran.

The Pentagon has not yet publicly ruled out potential involvement in a response to the attack, but so far, the Biden administration appears to have opted for a multilateral approach. A joint statement by members of the Group of Seven industrialized nations Friday condemned the attack on civilian commercial shipping as a “clear violation of international law.”

“All available evidence clearly points to Iran. There is no justification for this attack,” the statement read.

The Mercer Street incident is the latest case of sabotage targeting cargo ships in the Gulf region as Israel wages a covert campaign against Iran’s attempts to expand its military reach and influence in the region.

Iran’s newly sworn-in conservative President Ebrahim Raisi signaled Monday to French President Emmanuel Macron that Tehran has little interest in backing down amid tensions with Israel, the United States and its Western allies.

Meanwhile, indirect talks between Biden administration officials and their Iranian counterparts in Vienna over a return to the 2015 nuclear agreement have stalled.

Iranian officials are reportedly seeking guarantees that a future US administration will not abandon the deal as the Trump White House did in 2018.