Pentagon sees little choice but to make do with Taliban security perimeter until Tuesday's withdrawal deadline. 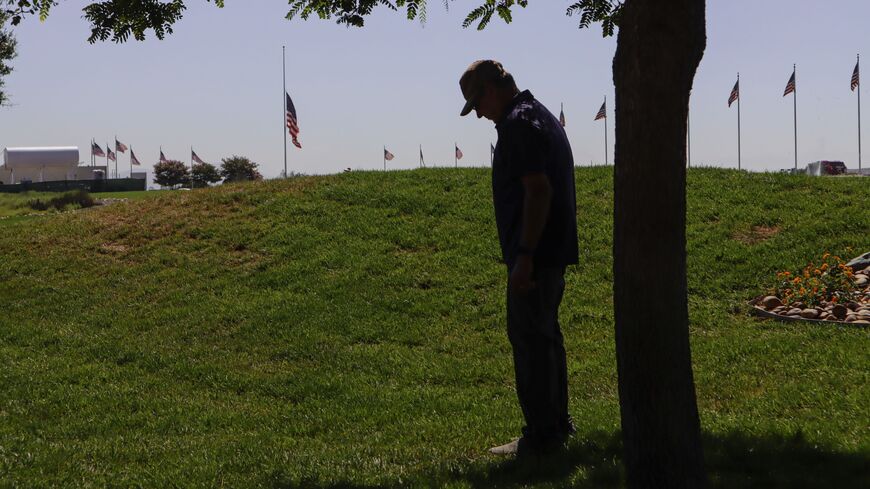 A man bows his head during a Navy SEAL memorial ceremony as a flag flies at half-staff at Miramar National Cemetery on Aug. 27, 2021, in San Diego, California. Over 170 people were killed, including 13 US service members, the day before in an Islamic State Khorasan terror attack outside the Kabul airport in Afghanistan. - Sandy Huffaker/Getty Images

US commanders overseeing evacuations from Kabul international airport continue to coordinate with Taliban checkpoints outside the gates after a deadly suicide bombing struck near the main entrance Thursday.

Pentagon officials are projecting confidence in the makeshift arrangement even as they expect additional attacks by groups such as the Islamic State Khorasan.

“We’re doing everything we can to be prepared,” the head of US forces in the Middle East, Gen. Kenneth “Frank” McKenzie, told reporters yesterday.

That has included asking the Taliban to move their checkpoints farther away from the airport’s gates and to continue blocking vehicles from approaching the airfield, McKenzie and other top military officials have said.

“We will continue to coordinate with them as we go forward,” said McKenzie, who assumed overall command of the Afghanistan mission in July.

Taliban fighters have moved to clear people away from the gates, creating open lines of sight for US troops overlooking the area, officials said.

At least 170 Afghans and 13 US troops were killed after a suspected Islamic State jihadi detonated a bomb just outside the airport’s Abbey gate Thursday evening. The senior Pentagon official, Maj. Gen. Hank Taylor, confirmed Friday that there was no second bombing at the nearby Baron Hotel, as McKenzie had previously stated.

The US Navy and US Army confirmed Friday that each branch had lost one service member in the attack. The other 11 killed were US Marines.

The bombing at the Abbey gate was the worst single loss of life for US military personnel since at least 2010, marking a painful end to America’s longest foreign conflict.

The suicide attack was not entirely unforeseen, McKenzie said Thursday, but he said the risk was inherent in the security arrangement at the Kabul airport as American troops personally search evacuees coming onto the airfield.

“There’s really no other way to do it,” McKenzie said, adding, “You don’t want to let somebody on an airplane carrying a bomb, because that can lead to massive loss of life.”

“We thought this would happen sooner or later. It’s tragic that it happened today,” he said.

The goal now, military officials say, is to prevent it from happening again. But the US Central Command leader said he hasn’t requested additional troops to secure the airport, as Washington’s deadline to leave looms just days away.

“We assess we have the forces we need to protect ourselves there,” McKenzie said. “I’m always in a constant dialogue with the secretary [of defense]. If I needed anything else, I’d be talking to him immediately,” he told reporters.

The unusual arrangement with the Taliban came after Afghan forces in the capital abandoned their posts, Al-Monitor previously reported.

The initial plan to send three battalions to Kabul airport, which was approved by President Joe Biden just three days before the capital fell to the insurgents, assumed that Afghan security forces would man the airport’s perimeter amid evacuations.

McKenzie credited the Taliban with preventing attempted attacks. The Marine general said the arrangement was not built on trust, but on mutual interest in seeing foreign forces leave Afghanistan.

“As long as we’ve kept that common purpose aligned, they’ve been useful to work with. They’ve cut some of our security concerns down,” he said.

“The plan is designed to operate while under stress, and while under attack, and we will continue to do that,” McKenzie said, noting that US commanders have shared limited intelligence on potential threats with Taliban officials.

US troops at the airport are on heightened alert as vehicle bombs pose a particularly imminent threat, officials have said. Counter-rocket, artillery and mortar systems are also located around the airfield, McKenzie explained, and the military has a variety of eyes in the sky closely monitoring crowds around the airport.

Kirby denied reports that Taliban had taken control of parts of the airport Friday, saying US troops continue to man the airfield’s gates. It remained unclear, however, how the US security perimeter inside the airport will change as the last troops depart Tuesday.

President Joe Biden on Thursday said he did not consider the decision to allow the Taliban to run security outside the airport to be a mistake.

“From the very beginning, force protection was always at the front of everybody’s mind,” Kirby said Friday.

“As we got more information, we made adjustments to force protection measures to try to do the best we could at what we thought were the specific threats we were facing,” Kirby said.

“Clearly all of that effort — and there was a lot of effort — fell short in some way.”

“It would be irresponsible if we didn’t act immediately to double down and make sure that we were being as anticipatory as possible.”