Turkey's future role in security at the air base likely will need to be renegotiated, according to sources. 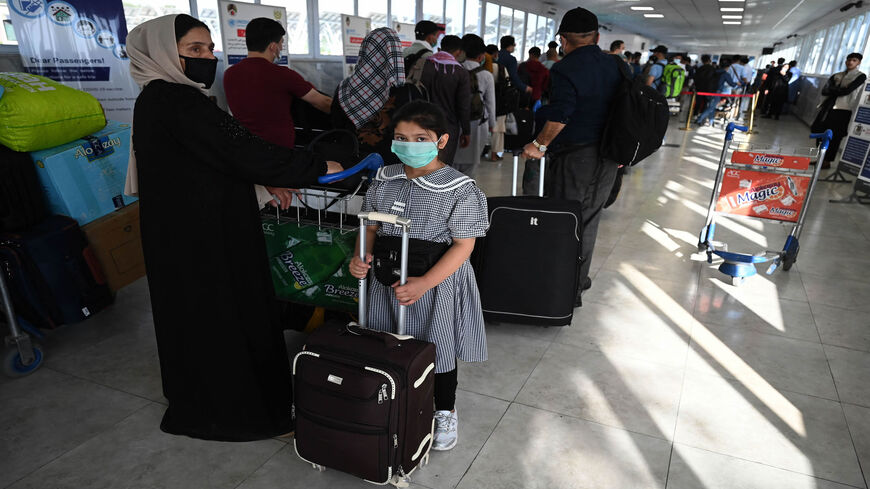 The family (front) of an Afghan national working at the French Embassy queue at Hamid Karzai International Airport as they prepare to leave on a special flight to France, Kabul, Afghanistan, July 17, 2021. - Sajjad Hussain/AFP via Getty Images

The Pentagon placed the head of the 82nd Airborne Division in charge of securing Kabul’s main airport this week after chaos on the runway temporarily halted evacuation flights from Afghanistan.

The arrival of Donahue, who last year oversaw US and NATO special operations in Afghanistan, comes as Pentagon officials say American, Turkish, Afghan and other international forces have secured the perimeter of Hamid Karzai International Airport.

“There are no Taliban in control of any part of the airport,” Pentagon Press Secretary John Kirby told reporters on Wednesday.

The Pentagon’s change of plans at Kabul international also means Turkey’s forces are no longer functionally in command there, a US defense official confirmed Al-Monitor.

As US personnel have flowed in, they have largely taken over the security role of Turkey’s soldiers, a second defense official said. Among other tasks, Turkish troops are now coordinating non-US evacuation flights out of the NATO-run terminal, the second official said.

The two US officials said details of Turkey’s commitment to securing the airport after Aug. 31 would likely need to be renegotiated, even as Ankara held open the diplomatic door.

“The Turks remain absolutely linked-in to the security mission,” Maj. Gen. Hank Taylor, who heads regional operations at the Joint Chiefs of Staff, told reporters at the Pentagon on Tuesday.

Some 5,200 US soldiers and Marines are now on the ground at the airfield, Taylor said today. Elements of the 24th Marine Expeditionary Unit out of Qatar and the 82nd out of Fort Bragg, North Carolina, were specifically selected for the operation.

“This is what the 82nd Airborne does really well,” Kirby told reporters Tuesday. “The task of securing and operating an airfield is actually a unique task that the 82nd can do.”

Marine evacuation teams are now assisting State Department personnel at the airport’s north and east entrances, Chairman of the Joint Chiefs of Staff Gen. Mark Milley said during a press conference alongside Defense Secretary Lloyd Austin. US special operations teams have also arrived on the ground, the chairman revealed.

Yet while British airborne troops have reportedly sought to exit the base in order retrieve UK citizens around Kabul, the Americans are staying put.

“The forces that we have are focused on security at the airfield,” Austin said at the Pentagon on Wednesday.

“You know what happens if we lose the ability to provide that security, and so I don’t want to detract from that,” the defense chief told reporters.

Thousands of Afghans breached the airfield’s southern perimeter on Monday, temporarily bringing evacuation flights to a halt as people rushed the active runway in panic. The incident led to several deaths and triggered an investigation by the US Air Force.

Air traffic resumed by around 3:45 on Monday afternoon after US troops restored order, Taylor told reporters earlier this week.

Precisely how the southern side of the airfield was breached remained unclear.

According to a diplomatic memo seen by Al-Monitor, US embassy personnel reported Sunday that Taliban fighters were in control of the south side of the airport, home to a civilian air terminal. One US official said Afghan security forces had also been in the area prior to the breach.

“Our commanders at the airport are in communication with Taliban commanders on the ground,” Kirby said Tuesday. “I would just let the results speak for themselves.”

Kirby declined to discuss the “sausage-making of communications” with the insurgents, but confirmed the next day that Vasely had been leading discussions with a Taliban official with responsibility in the area.

Speaking on condition of anonymity, the second US official said the opposing sides found themselves in a “mutually beneficial” situation after Taliban fighters seized control of the airport’s south entrance following the breach on Monday. Officials who spoke to Al-Monitor said it remained unclear why the fighters took control of the gate.

Monday’s chaos at the airfield came a day after the head of all US forces in the region, Gen. Kenneth “Frank” McKenzie, negotiated a truce backed by the threat of force with Taliban officials in Doha, Qatar, on Sunday.

McKenzie, who assumed command of the dwindling Afghanistan mission in July, briefly visited Kabul airport on Tuesday to inspect US defenses and coordinate with commanders.

The State Department has also been in communications with the Taliban to ensure safe passage of US and other civilians to the airport. That channel was revealed by national security adviser Jake Sullivan during a press conference at the White House on Tuesday.

Questioned by a reporter, Sullivan said Biden administration officials were aware of reports that the Islamist fighters had beaten civilians and denied them access to the airport. The national security adviser said officials had addressed the issue with the insurgents.

“The safe-passage agreement is important because we aren’t outside the airport and they are,” Kirby said Wednesday, noting that talks between Vasely and the unidentified Taliban official were ongoing.

For the first time on Wednesday, US President Joe Biden affirmed the evacuation mission would continue until all US citizens are out of Afghanistan, rather than terminate on the White House's Aug. 31 withdrawal deadline.

For now, however, the US soldiers and Marines at Kabul international airport must wait for tens of thousands of evacuees to come to them.

“We don’t have the capability to go out and collect up large numbers of people,” Austin explained during Wednesday’s press briefing at the Pentagon.