The original plan to secure Kabul airport took the presence of Afghan security forces for granted, a US official said. 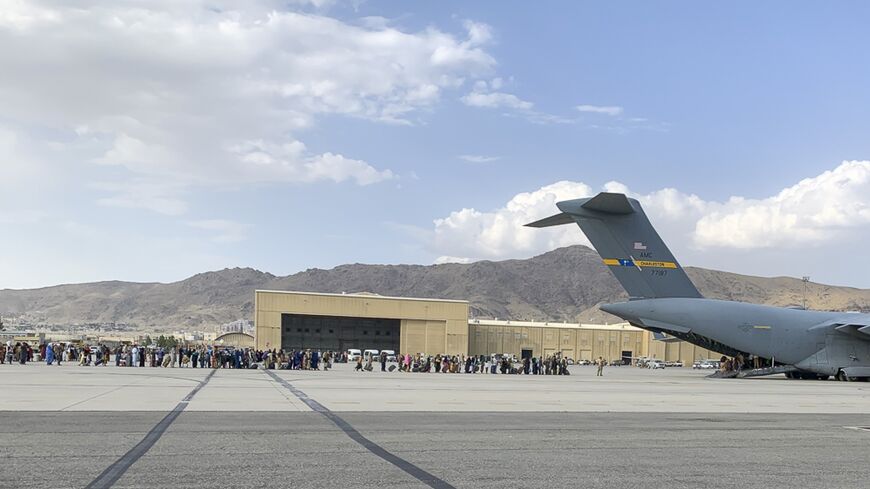 Paratroopers with the XVIII Airborne Corps assist in the evacuation of noncombatants at Hamid Karzai International Airport on Aug. 21, 2021, in Kabul, Afghanistan. - US Army via Getty Images

Taliban fighters entered Kabul airport last week and drove Afghan civilians away from the runway following a breach in the US military’s perimeter, three US defense officials told Al-Monitor.

Thousands of panicked Afghans flooded onto the tarmac Aug. 16 from the southern side of the airport, home to the main commercial air terminal. The chaos temporarily halted evacuation flights and led to several deaths, triggering an investigation by the US Air Force.

While some events leading up to the breach remained unclear, officials said the commercial terminal had not been fully secured by arriving US troops.

The Taliban’s role in clearing the airfield, which has not been publicly acknowledged by Pentagon officials, underscores the haste with which the Biden administration deployed troops to the airport as the insurgents swept to power in Afghanistan.

It also raises questions as to the precariousness of the US security arrangement with the Taliban as commanders on the ground have been forced to rely on their longtime enemy for crowd control outside the gates after Afghan security forces largely collapsed.

US Central Command did not return Al-Monitor’s emailed request for comment.

Footage of large crowds of people running alongside a taxiing US C-17 on Aug. 16 drew public scrutiny across the world to the Biden administration’s handling of the withdrawal from Afghanistan.

By that afternoon, US troops and low-flying Apache helicopter crews based on the north side of the airfield had cleared people from the runway, enabling military flights to resume, Pentagon officials said during a press conference later that day.

They did not mention that by the evening of Aug. 16, Taliban fighters had moved to the southern side of the airfield and also began dispersing crowds, three US officials told Al-Monitor. One of the officials described the insurgents’ actions as “clearing operations.”

“The Taliban said they were taking control of this area. It happened to be mutually beneficial,” a US official told Al-Monitor. The sources spoke on the condition of anonymity because they were not authorized to speak publicly on the matter.

The fighters withdrew by Aug. 17, a second US official said, though they remained in control of the airport’s southern entrance and continue to man checkpoints outside other gates.

It remained unclear why Taliban fighters moved to fill the breach, but they did not appear to pose any threat to US troops, the officials said.

The day prior to the incident, the head of US forces in the region, Gen. Kenneth “Frank” McKenzie, came to an agreement with Taliban officials in Doha, Qatar, on a “deconfliction mechanism” to ensure the safety of the evacuation process at the airport.

During the meeting, McKenzie was given information on a Taliban official in Kabul with whom American commanders could coordinate their positions, a well-placed US defense official told Al-Monitor.

The US commander at Kabul international, Rear Adm. Peter Vasely, was in communication with the Taliban official as the insurgents cleared people from the airfield Aug. 16, the sources said.

Pentagon spokesman John Kirby alluded to those talks during a press briefing the following day. “There are interactions down at the local level,” Kirby told reporters. “Without speaking to the sausage-making of communications here, thus far — and it’s early on — the results are speaking for themselves,” he said.

Whether US commanders communicated approval for the Taliban’s move remains unclear.

“I know of no request for the Taliban to assist on Monday [Aug. 16],” Kirby said in response to a question by Al-Monitor last week, adding, “I couldn’t tell you what they were doing.” He denied that Taliban fighters had entered the airport’s grounds.

Maj. Gen. Hank Taylor also demurred on the subject when asked by Al-Monitor about details of the incident. “I don’t have the tactical AAR [After-Action Review],” said Taylor, deputy director of regional operations of the Joint Chiefs.

“But what I do know, is that that was quickly, you know, fixed, and the commanders there were able to use the assets they had immediately,” he said.

Just three days before the Taliban entered Kabul, President Joe Biden authorized roughly 3,000 US soldiers and Marines under Vasely’s command to secure the airport amid the evacuation of the US Embassy.

A brigade combat team of the 82nd Airborne Division was to remain in Kuwait as a reserve force in case the situation deteriorated.

The original plan was built on the premise that local security forces in Kabul would remain outside the airport and in control of the commercial terminal, according to the second US defense official.

As the Taliban entered the capital unexpectedly on Aug. 15, however, the majority of those Afghan forces abandoned their posts, the official said.

Before the bulk of the 82nd Airborne troops could be deployed, however, the Taliban occupied the southern side of the airport, according to a diplomatic cable seen by Al-Monitor.

“Plans are not always perfectly predictive,” Kirby said after control was restored on the runway last week.

“I think if you look at the images out of Kabul, that would have been difficult for anyone to predict,” he said.

“One of the things that we couldn’t anticipate and was the degree to which Afghan forces capitulated, sometimes without a fight.”

The Taliban also established checkpoints outside other gates, in some cases shooting into the air and physically attacking civilians, including US citizens.

While condemning the violence, Kirby said Monday that direct coordination with the Taliban on the arrangement “has worked well in terms of allowing access inflow to continue as well as reducing the overall size of the crowds just outside the airport.”

“When you run an operation like that, when you try to position assets to go in and secure an airfield in a city that has been taken by opposing forces with a government that’s collapsed, your contingency plan is going to hit head-on with reality,” US national security adviser Jake Sullivan said during a press conference at the White House on Monday.

“There are going to be complexities and challenges and difficulties, and you work through them, you make adjustments and you ultimately get an operation going that is moving out thousands if not tens of thousands of people daily,” Sullivan said.

On Monday, a Taliban spokesperson told Sky News that if US troops remain beyond Biden’s Aug. 31 deadline, “it will provoke a reaction.”

The threat came just a day after an exchange of gunfire at one of the gates left one Afghan security force member dead and wounded several others. The Pentagon has not ruled out that the attackers were Taliban, Kirby said Monday.

In a speech Tuesday at the White House, Biden said evacuations were “on pace” to meet the deadline, but said had told military officials to be prepared to adjust it, "should that become necessary."

Reuters reported that Defense Department officials advised the president to stick to the deadline, citing risks to US forces.

Asked during a press briefing Monday whether the Taliban positions outside Hamid Karzai International Airport put them in a better position to dictate when the United States leaves, Taylor said, “I can’t answer that."