US officials feared the local faction called the Islamic State-Khorasan could attack the beleaguered airfield in the Afghan capital. 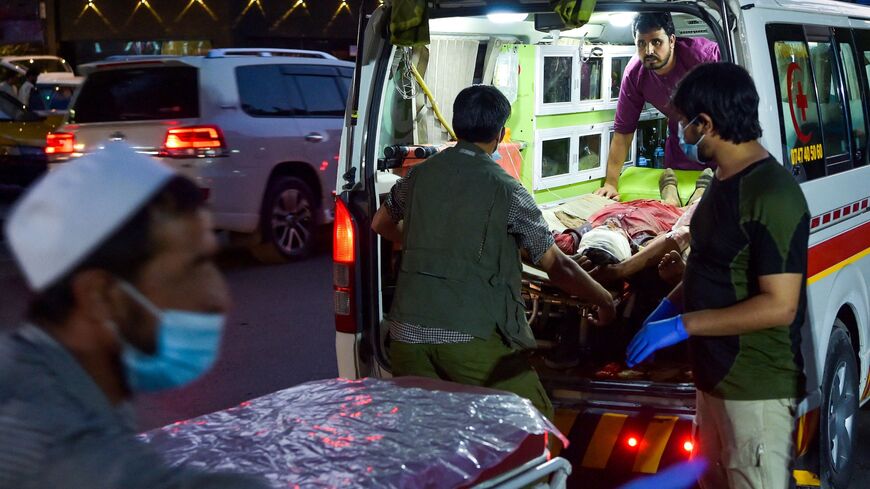 Medical staff bring an injured man to a hospital in an ambulance after two powerful explosions killed at least six people outside the airport in Kabul on Aug. 26, 2021. - WAKIL KOHSAR/AFP via Getty Images

Another 15 US military personnel were wounded at the Abbey gate of Hamid Karzai International Airport, CENTCOM commander Gen. Kenneth “Frank” McKenzie said during a virtual press briefing at the Pentagon.

CENTCOM later updated that number, saying 13 service members had died and 18 were wounded.

At least 60 other people were killed by the blasts, BBC reported, with an additional 140 reported wounded. IS gunmen opened fire at the gate following the explosion, McKenzie said.

IS-Khorasan, the local Afghan branch of the Islamic State group, claimed credit for the attacks on Thursday.

The faction has its roots in the Pakistani Taliban, and has long fought against the Afghan Taliban – an enmity which US officials have counted on amid NATO’s withdrawal from Afghanistan.

A second bombing occurred at the nearby Baron Hotel, just east of the airport’s main entrance.

The attacker who targeted the airport entrance made it past a series of checkpoints manned by Taliban fighters who are securing the area on behalf of US forces, but it remained unclear how, McKenzie told reporters.

“Sometimes those searches have been good, and sometimes not,” McKenzie said, adding, “Somebody got close to us. We’ll try to find out why.”

The CENTCOM commander did not rule out that Taliban fighters may have allowed the suicide bomber through, and said the US would retaliate if determined who conducted the attack.

In coordination with American commanders, the insurgents took over security outside the airport on Aug. 15 as the Afghan government collapsed.

The unlikely security arrangement came after McKenzie met directly with Taliban leaders in Qatar as the Islamist fighters moved into the Afghan capital.

Rear Adm. Peter Vasely, the top US commander at the airport, has been talking directly with Taliban officials on security at the site, including on whom should be allowed through the checkpoints.

American commanders have also been sharing limited intelligence on potential IS-Khorasan attacks with Taliban officials in Kabul, the general confirmed, adding that CENTCOM believes the insurgents have already prevented other attempted attacks. The coordination will continue, he said.

Taliban-linked social media accounts have claimed that elite fighters believed to be linked with the Haqqani network, a hard-line faction aligned with the Taliban, are providing security at the south gate. The claim has not been independently confirmed by Al-Monitor.

Earlier today, Pentagon Press Secretary John Kirby confirmed a number of US military personnel were killed and others wounded in a “complex attack” that targeted the airport’s Abbey Gate and the nearby Baron Hotel.

The Taliban, which have been managing security outside the airport since moving into the Afghan capital earlier this month, initially said at least 13 people had been killed, including children.

The attacks came several hours after both the US and UK governments warned people on Wednesday not to approach the airport amid ongoing evacuations.

“US citizens who are at the Abbey Gate, East Gate, or North Gate now should leave immediately,” the US Embassy in Kabul said in an alert issued last night.

The warnings came as US and Western officials grew increasingly concerned over possible threats by IS-Khorasan. US national security adviser Jake Sullivan said the group posed an “acute” and “persistent” threat amid the evacuations.

Intelligence on the group’s intention to target the airport led US defense officials to plan alternate routes for Americans to reach the gates, CNN reported.

A Taliban spokesperson said the group “strongly condemns the bombing of civilians” at the airport. Spokesperson Suhail Shaheen claimed the bombing “took place in an area where US forces are responsible for security.”

The Abbey Gate lies on the south side of Kabul's airport. The Baron Hotel lies a few hundred meters east of the airport’s main entrance, the main road to which is guarded by Taliban checkpoints.

Last week US military and intelligence teams quietly evacuated 169 Americans from the Baron Hotel via helicopter after they were instructed to gather there by British personnel. The Pentagon has been reluctant to release details of that and two similar operations, citing concerns over potential future attacks.

US, British, Turkish, Afghan and other international security forces remain at the airport as evacuation flights continue.

Ankara’s forces will depart the airport ahead of the Biden administration’s withdrawal deadline next Tuesday, the country’s Defense Ministry confirmed yesterday.

The UK’s Defense Ministry said it had no reports of casualties among its personnel.

US Secretary of State Antony Blinken said yesterday that some 4,500 of the known 6,000 Americans remaining in Afghanistan had been evacuated, though reports of people being denied access to the gates by Taliban fighters have continued.

The evacuation of US and Afghan personnel will continue until the August 31 deadline, top US defense officials said following the attacks on Thursday.

“IS will not deter us from accomplishing that mission, I can assure you of that,” McKenzie said.