US troops regained control of the runway Monday afternoon after masses of Afghans rushed onto the tarmac hoping to escape. 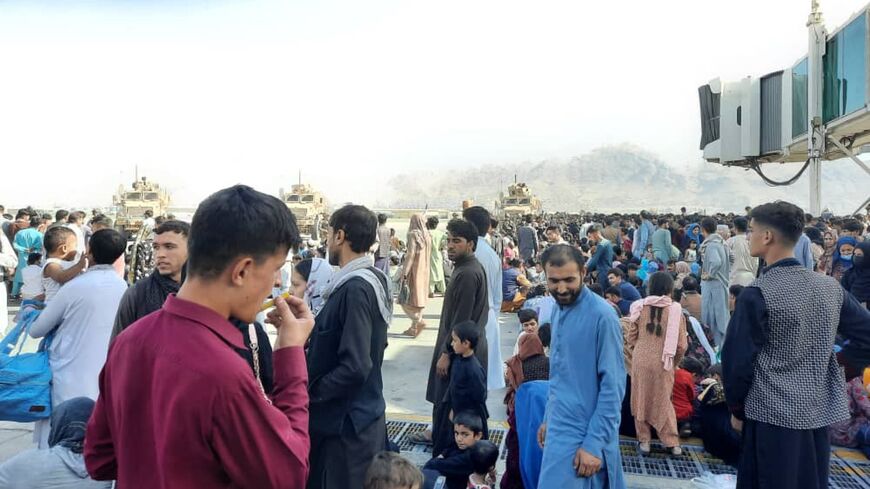 Afghans crowd at the tarmac of the Kabul airport on Aug. 16, 2021, to flee the country after the Taliban took control of Afghanistan. - AFP via Getty Images

The Biden administration went on the defensive Monday after US troops rushed to restore order as chaos broke out at the Afghan capital's main airport following the Taliban’s takeover of the country.

Thousands of Afghans hoping to escape the Islamist insurgents overwhelmed the tarmac on Monday, temporarily bringing evacuation flights to a halt.

For the third time in as many days, US Defense Secretary Lloyd Austin tapped into an emergency reserve force from the Army’s 82nd Airborne Division to help secure the airstrip, a final escape route for many panicked Afghans and international personnel.

Over the coming days, the additional battalion will bring the total number of US troops at the airport to roughly 7,000, Pentagon spokesman John Kirby said Monday, nearly tripling the US footprint in Afghanistan over late last year. A fourth battalion of the 82nd’s brigade combat team will remain in Kuwait in reserve.

The stunning takeover faced little resistance from much of the Afghan military, a point President Joe Biden emphasized in a White House speech amid withering criticism over his administration’s handling of the withdrawal.

Thousands of American citizens and more than 10,000 Afghans still awaiting special immigrant visas remain in the country according to the State Department, despite continued assertions from American officials that they will not be left behind as that administration's stated Aug. 31 withdrawal deadline looms.

Some 2,500 US troops were at Kabul airport Monday after their deployment was approved by President Biden last week. The United States has now taken over air traffic control, officials said.

“Our focus is making sure we can get security at the airport restored,” Kirby told reporters Monday, adding that Turkish troops were assisting in the operation.

Hundreds of US Embassy personnel have been evacuated to the airport over the past few days as senior administration officials held marathon meetings through the weekend. One source familiar with deliberation last week over where to send Afghan applicants said on condition of anonymity, "Everyone was throwing ideas at the wall just to see what would stick."

The administration is now relying largely on the military to house as many as 22,000 visa applicants and family members at bases inside the United States, in a reversal from previous policy.

"We believe ... that we can meet that goal by the end of the month," Kirby said Monday. Canada agreed to accept 20,000 Afghan refugees last week.

Yet the fate of Washington’s last-minute evacuation effort appeared to be in question Monday as thousands of Afghans rushed onto the active runway in desperation. Video captured at the scene showed a number of men clinging to the side of a US military transport plane as it took off. Some were later seen tumbling to their deaths.

During a press briefing at the Pentagon on Monday morning, Kirby said Afghan visa applicants should “shelter in place” while soldiers and Marines tried to regain control of the airport.

Security at Hamid Karzai International remained fraught well into the afternoon. Two armed men were shot dead by US soldiers, though Pentagon officials said they had no indication that the assailants were Taliban. One US service member was lightly wounded and returned to duty, Maj. Gen. Hank Taylor told reporters during a second Pentagon press briefing Monday evening.

The Islamist insurgents appear so far to be heeding a warning delivered by Gen. Kenneth “Frank” McKenzie, the commander of all US forces in the region, to the insurgents’ leadership in Doha yesterday.

Taliban spokesperson Suhail Shaheen told MSNBC on Monday that the fighters would not attack US personnel and would not punish Afghans who worked with Western forces over the past two decades.

“Any attack on our operations and our people will be met with forceful response,” Kirby reiterated Monday, but also said the United States has not conducted any airstrikes in Afghanistan since last week.

Flights eventually resumed at the Kabul international airport around 3:45 p.m., allowing additional Marines to arrive, Taylor said. Amid the chaos, only about 700 Afghan visa applicants were evacuated Monday, though he said as many as an additional 1,000 troops were expected to land before the end of the day.

“Once we get the operation up and running well, we could get up to 5,000 [evacuees] out per day,” Kirby said Monday.

Execution of the withdrawal is now facing criticism by lawmakers from both parties in Congress.

Democratic Sen. Mark Warner of Virginia, who chairs the Senate Intelligence Committee, said in a statement that he hopes to work with other leading lawmakers “to ask tough but necessary questions about why we weren’t better prepared for a worst-case scenario” in Afghanistan.

“What happened at the airport was a lot of Afghans trying to get out of the country. I don’t think that was a lack of planning,” Taylor said at the Pentagon.

Kirby said Defense Department officials ran drills simulating the evacuation of civilians from Kabul as far back as May, but would not say whether those exercises included scenarios in which the Afghan capital had been overrun.

“We think those exercises did prepare us,” he said, adding, “Plans don’t often survive first contact.”

The mass panic at the airport Monday, Kirby added, “would have difficult for anybody to predict.”

During a press conference at the White House on Monday afternoon, Biden said he stands “squarely behind” his decision to pull US troops from Afghanistan, placing the onus on the Afghan government and emphasizing Washington's more pressing strategic priorities.

"I've argued for many years that our mission should be narrowly focused on counterterrorism, not counterinsurgency or nation-building," Biden said, adding, "That's why as president, I'm adamant that we focus on the threats of today, not yesterday's."

The president, however, offered little response to criticism of the withdrawal's execution, saying some Afghan visa recipients “didn’t want to leave” and that the Afghan government had discouraged emigration.

The Taliban's takeover, he acknowledged, "did unfold more quickly than we anticipated."

“So, what happened? Afghanistan’s political leaders gave up and fled the country. The Afghan military collapsed, sometimes without trying to fight.”

“Americans should not be fighting and dying in a war that the Afghan military is not willing to fight for itself,” Biden said.

The president said he personally urged Ghani to tackle corruption and negotiate with the Taliban, but the Afghan president “flatly refused.”

“Mr. Ghani insisted the Afghan forces would fight,” he said. “He was wrong.”