The Pentagon is readying as many as 8,000 troops to facilitate the withdrawal of American and Afghan personnel. 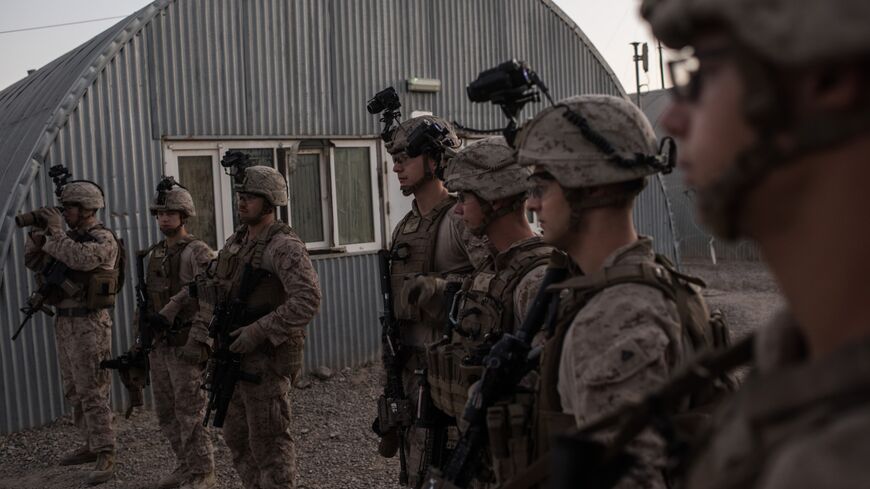 US Marines prepare to man guard stations at Camp Shorab on Sept. 11, 2017, in Helmand province, Afghanistan, when the Marines were still assisting local Afghan forces. As of Aug. 12, 2021, the Taliban had captured much of the province; the Pentagon has ordered two Marine and one Army infantry battalions to Kabul airport to aid in the evacuation of US personnel and Afghans seeking to leave the country. - Andrew Renneisen/Getty Images

The Pentagon is deploying an additional 3,000 troops into Afghanistan to assist the evacuation of American and Afghan personnel amid sweeping Taliban advances across the country.

The deployment brings a more than fivefold increase over the roughly 650 US troops remaining in Kabul ahead of President Joe Biden’s Aug. 31 withdrawal deadline.

Turkey’s government, which has offered to leave its own 500 troops to secure the airport after the deadline in order to protect international diplomatic missions, remains in charge of security at the site, Kirby said.

The announcement comes as State Department spokesman Ned Price said the United States would draw down its embassy presence to a “core diplomatic mission” in Kabul by the end of the month amid significant security concerns over Taliban advances.

The insurgents have captured roughly a third of Afghanistan’s provincial capitals in less than a week, including the city of Ghazni, which lies roughly 90 miles south of Kabul. Government forces also reportedly lost control of the country's third- and second-largest cities, Herat and Kandahar, respectively, Thursday.

It was not immediately clear Thursday whether the additional troops would also withdraw by the end of this month. Kirby has previously said the US military may retain some role at Hamid Karzai International Airport to assist Turkey’s mission beyond the deadline.

The Pentagon is not treating the new operation as a combat mission, though the soldiers and Marines will be armed with mortars and machine guns for defensive purposes, Kirby said.

“This is about prudent preparation,”he said, adding, “We want to make sure we’ve got enough [troops] on hand to adapt to any contingencies.”

In addition to the Kabul force, an 82nd Airborne Division brigade combat team consisting of up to 4,000 soldiers will deploy from Fort Bragg, North Carolina, to Kuwait as a quick reaction force in case the situation around Kabul deteriorates further. Also, 1,000 US military personnel will head to Qatar to help accelerate the processing of Afghan visa applicants fleeing the country, Kirby said.

In a sign of the urgency descending upon the Pentagon this week, Defense Secretary Lloyd Austin held discussions with other top military officials over plans to ready military aircraft that may be needed to help evacuate more than 15,000 Afghan visa applicants remaining in the country. The Biden administration has so far relied on chartered aircraft for those flights.

Turkey’s government is seeking talks with the Taliban in hope of coming to an agreement that would allow Ankara’s troops to remain at the airport unharmed. Pakistani Prime Minister Imran Khan called for a face-to-face dialogue between the two sides after meeting with Turkey’s defense minister in Islamabad on Thursday.

A Taliban spokesman expressed openness Wednesday to potential talks, but once again rejected Turkey’s proposal to leave troops in the country, despite a US-led diplomatic push in Qatar aimed at moderating the Islamist insurgents’ ambitions.

US intelligence has assessed that Kabul could potentially fall within 90 days, The Washington Post first reported, despite continued US and Afghan airstrikes against the Taliban.

"What is happening now is not a surprise. It was predicted. If anything, it is happening faster than predicted," said Mick Mulroy, the Pentagon's former top Middle East policy official and an ABC News analyst.

"We are not seeing the worst of it. The Taliban is not only taking territory, they are killing people with the weapons we provided" to Afghan security forces, said Mulroy, a former CIA officer and Marine infantryman who served in Afghanistan.

"The question now seems to be, when do we depart? Do we leave now, or wait until the country is in full crisis and the situation resembles the fall of Saigon?" he said.

The UK government also announced Thursday it would send 600 troops to Afghanistan to assist the withdrawal of its citizens.