The announcement by Transportation Minister Merav Michaeli on her baby being born by an American surrogate mother generated enormous public debate about the issue and about Michaeli’s convictions. 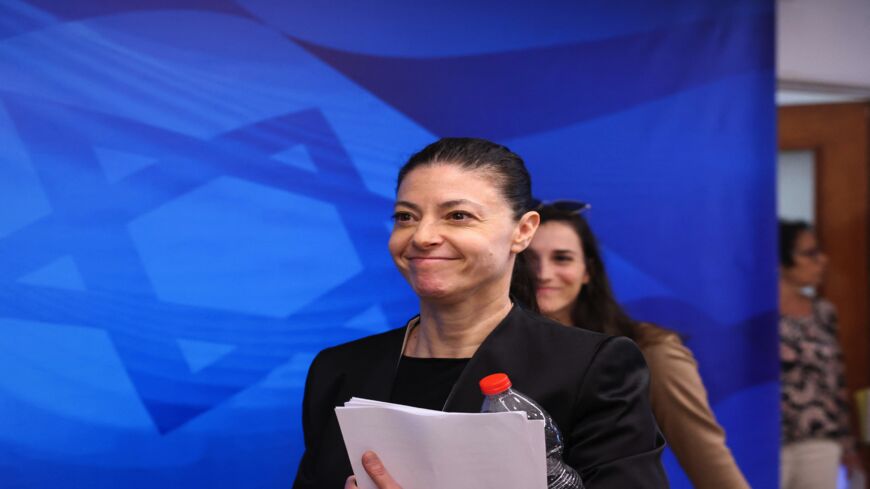 The latest scandal to reverberate across Israel this week surrounds a photo of Labor Party leader and Minister of Transportation Merav Michaeli with her partner, the popular comedian Lior Schlein, holding their new baby. Apparently, the photo was taken when the child was just a few hours old. The commotion surrounding it refuses to die down ever since it first began making the rounds on Facebook on Aug. 21.

The photo was taken at a hospital in the United States where Michaeli and Schlein went to take part in the birth of their son, who was born through a surrogate. Michaeli first posted the photo on her Facebook page, along with a very moving account about her long journey to parenthood. That post exploded across the media with shockwaves that continue to reverberate.

In fact, the controversy began a day earlier on Aug. 20 when the media first revealed that Michaeli, a member of the Coronavirus Cabinet, flew to the United States at the height of the virus’ fourth wave. She was called out at the time for traveling on a private trip against the recommendation of Prime Minister Naftali Bennett, who had just asked the public to avoid unnecessary travel. Michaeli herself would not comment on the news for the next 24 hours, even while social media was lashing out at her for the troubling example she was setting as a leader.

Then, as if out of nowhere, Michaeli broke the news that she was now a mother. This came as a surprise to everyone. Many of her outspoken critics erased their earlier posts and tweets, apologized and congratulated her on the happy occasion. But the respite was short-lived. Now, Michaeli has come under criticism from an entirely different direction. This time, she is being accused of hypocrisy. This too was inevitable. Michaeli has spent the last two decades spearheading an agenda that supported those who choose “nonparenthood.” In fact, she regularly told interviewers she had no interest in having children and she had a full and meaningful life without the added title of “Mom.”

Michaeli is one of the most influential women in Israel — a status she has held since the beginning of her career as a top media personality. For years, her nonparenthood agenda inspired many women to buck long-established cultural norms. Others considered the whole thing scandalous. How could she do that, especially in a country that considers the very idea of having children sacrosanct.

But there was another reason for the fervid attacks. As one of the most prominent pioneers of Israeli feminism, Michaeli herself had spoken passionately against the very idea of surrogacy. In fact, she was often condemned for doing so.

It was eight years ago when Michaeli — then just another member of the Knesset — told an interviewer: “I see it as being very problematic. It is a form of trading in women’s bodies and reveling in it in a way that makes me feel uncomfortable. … The fact that people who cannot conceive approach a woman who must then undergo hormone treatments, pregnancy and childbirth with all that this entails, only to give up that child, seems — how shall I say it — unreasonable. After all, the women who do it are desperate for the money. In other words, the element of choice seems to be rather questionable.” In that same interview, Michaeli suggested couples who cannot conceive should consider adoption instead.

These quotes from the past have been raised repeatedly on social media over the last few days. Childless women came out against her, but so did members of the LGBTQ community, who often use surrogates to have children of their own. The fact that Michaeli is such a powerful trailblazer, and an opinionated one at that, left many people stunned.

While the message of her post was very moving, it did not offer any explanation for her sudden change of mind or regret for any of her sharp statements in the past. “The first time that Lior said ‘Let’s have a baby,’ I was sure that it was all a joke. He’s a comedian, after all, and he was talking to me, knowing full well that I have no plans to have children,” she wrote. “When he kept it up, I thought that he was just saying it because in our culture, this is an acceptable way to say ‘I love you.’ For a long time, I thought that it was a phase and that it would pass. From my perspective, our lives were absolutely wonderful the way they were. But over time, I came to realize how much he really wanted this. I looked at him and realized that I love him, so I decided to be with him. That’s when I chose to go on this journey with him.”

Michaeli also noted, “This was a journey with lots of attempts. I’m glad that I went through it. I now know what it means for me personally and what it involves. I know what it is like to undergo fertility treatments, but we’ll talk about that some other time. We had the incredible good luck to meet Kelsey, an amazing young American woman, who wanted to help people in our situation, while at the same time supporting her wonderful family. Thanks to her, Uri was born yesterday.”

All of this came as a complete surprise. Michaeli and her partner were determined to keep their efforts to have a child a secret and only reveal it when the time was convenient for the mother. That is why some people said this was in many ways a PR stunt. They even suggested that causing a commotion about the coronavirus (her traveling abroad) was just a ploy and it afforded her an opportunity to distract people from the main issue: Michaeli had just turned her back on everything she once believed in.

Michaeli was never one to follow the flow. She has a partner 12 years her junior, but they live in separate apartments in the same building. Ever since she entered politics, she has worn only black, claiming this way people listen to what she has to say instead of focusing on what she’s wearing. She also makes a point of using the feminine gender in speech, even when she is referring to men — a particular trait with which she has come to be identified. All of this is done to empower women.

The big breakthrough in her political career happened last year. She managed to get elected head of the Labor Party and rehabilitate it after so many years on the wane. Then she won a remarkable seven seats in the last election and was appointed minister of transportation. At the same time, she is also a member of the Security Cabinet. In fact, Michaeli is now the most senior woman in the new government’s Cabinet.

The commotion surrounding Michaeli is far from dying down. There is no doubt that once she returns to Israel, the media will pummel her with questions and she will have to give answers. Why did she change her mind about surrogacy? Doesn’t the fact that both she and her partner are people of means constitute a form of exploitation, as she used to argue? And why didn’t they try adoption? Michaeli certainly has the right to change her mind, but the fact that she is a public figure, a high-ranking Cabinet member and one of the country’s top feminist opinionmakers would seem to mean she owes some kind of explanation as to why she suddenly changed her mind. And as for her new position on surrogacy, she should probably be as outspoken about it as she was about her anti-surrogacy — and nonparenthood — campaigns in the past.