Israel is scrambling to bring home babies born to surrogate mothers in disaster-stricken Nepal, while its LGBT citizens are calling for surrogacy options in their own country. 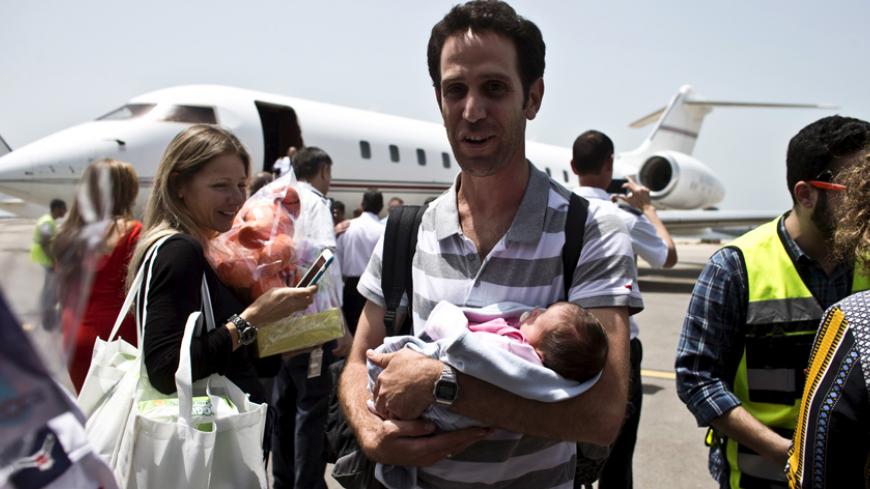 An Israeli man holds his baby, born to a surrogate mother, after being evacuated from Nepal and landing at Sde Dov Airport in Tel Aviv, Israel, April 27, 2015. - REUTERS/Nir Elias

Early on April 25, when initial reports reached Israel about the crisis facing Israeli babies born to surrogate mothers in Nepal, Interior Minister Gilad Erdan opened a little war room of sorts in his home. According to the information trickling in, there were some 20-day-old babies, some of them premature, born in Nepal to Israeli citizens. Most of those Israelis were same-sex couples, trapped there by the earthquake that has devastated the country. The family members of these concerned new parents described a severe shortage of baby food. They told of hospitals in the capital, Kathmandu, which had been turned to rubble, and of cars that had become incubators for the infants who required oxygen.

According to official procedure in Nepal, babies born to surrogate mothers can leave the country only after an arduous bureaucratic process that often lasts weeks. It took Erdan just a few hours to maneuver around the obstacles imposed by the Nepalese government, as well as Israel’s own bureaucratic hurdles. As the minister responsible for distributing ID cards, he coordinated the effort to grant Israeli citizenship to these infants with the Foreign Ministry. This meant that the babies could receive Israeli citizenship papers through the Israeli Embassy in Nepal, even though the actual building was damaged and its staff was forced to work in the courtyard. While the problem of granting these babies citizenship was being resolved, Israel was also handling the logistics of sending aid to Nepal and airlifting the infants from there.

On the afternoon of April 27, the first babies evacuated from Nepal landed at the Sde Dov airfield in Tel Aviv. They arrived on Red Magen David planes, staffed with a medical team that cared for them throughout the flight. After three nerve-wracking and sleepless days, the tearful parents stepped off the plane with their babies in their arms. They went out of their way to praise the state for its rapid rescue efforts.

While the rescue of the remaining infants continues, additional efforts are underway to find a solution for the surrogate mothers who are still carrying the children of parents from Israel in their womb. On Monday, Attorney General Yehuda Weinstein approved bringing these women to Israel on a one-time basis, if they agree, so that they can complete their pregnancies in safety.

From the moment they landed in Israel, the new parents and their families became media sensations. The touching stories of their long and expensive travails just to have children became a hit on the social networks. More than anything, the story of these babies born in Nepal to Israeli parents via surrogate mothers is an expression of what is called “Israeli DNA.”

What stands out most, though, is this: Even after the recent elections revealed a country divided and torn by tribal loyalties between religious and the secular Jews, right and left, Ashkenazim and Mizrahi (European Jews versus those of Middle Eastern origin) and between the people of the “state of Tel Aviv” and the periphery, there seems to be something instinctively Israeli that results in these special moments of unity. It exemplifies the old adage, “All Israel are brothers.” The people of Tel Aviv may have been the sworn enemies of the “blinkered” right just moments ago. They may have even mocked Likud voters. Now, they are going out of their way to flatter the state and Erdan, a member of the Likud, who led the efforts to bring the babies to Israel as quickly as possible.

It is important to note that these babies are the children of homosexuals. The ultra-Orthodox parties are about to enter the new coalition, and as far as many of their constituents are concerned, LGBT men and women are outcasts who desecrate the Jewish religion. Nevertheless, the right-wing government has gone to the ends of the earth to ensure that their children arrive in Israel healthy and whole. And not a single ultra-Orthodox politician has said anything against it.

Rabbi Yuval Cherlow, a leader of the religious Zionist movement who supported the humanitarian efforts to bring the infants to Israel, said, “It does not cast a shadow on the scandal underlying this form of surrogacy, which is both unethical and illegal, and more like servitude than anything else.” Yet, even this crass statement was swallowed up by the surrounding excitement and national pride.

At this moment, Israel is standing beside its citizens as an enlightened and liberal state. It has proven that it is a country that will do everything to rescue its people when they are in trouble. Indeed, not a single ultra-Orthodox politician dared to threaten a coalition crisis or attempted to interfere with the rescue efforts.

The earthquake in Nepal also exposed the extent of the surrogacy phenomenon in Israel. Because the practice has yet to be formalized by legislation, same-sex couples are forced to fly halfway around the world to complete the procedure. Since the 2000s, many of these couples have been going to the United States to do it. The problem is that while surrogacy is legal there, it is also very expensive, costing as much as $100,000 per child. As a result, many Israelis have sought alternative solutions in countries such as India and Thailand, but these countries have also recently begun to enforce restrictions on surrogacy (and even there, the cost can come to $40,000). As a result, Israelis are now turning to Nepal.

In March 2014, the government overcame the opposition of the HaBayit HaYehudi Party to approve an amendment to the Surrogacy Law, which allows same-sex couples to undergo the procedure in Israel. However, the collapse of Benjamin Netanyahu's third government delayed the legislation and it was never completed. If anything is to be derived from the events of the last few days, it is this: If the State of Israel can act so impressively, so movingly, to bring these babies to Israel, the next government should rise to the occasion by enacting legislation to allow legal surrogacy for the LGBT community in Israel as well.