Visiting Israel for the third time, Bahrain’s undersecretary for international relations at the Foreign Ministry, Sheikh Abdulla bin Ahmed bin Abdulla Al Khalifa, met with President Isaac Herzog, visited the Peres Center for Peace and innovation and even went diving in the Mediterranean. 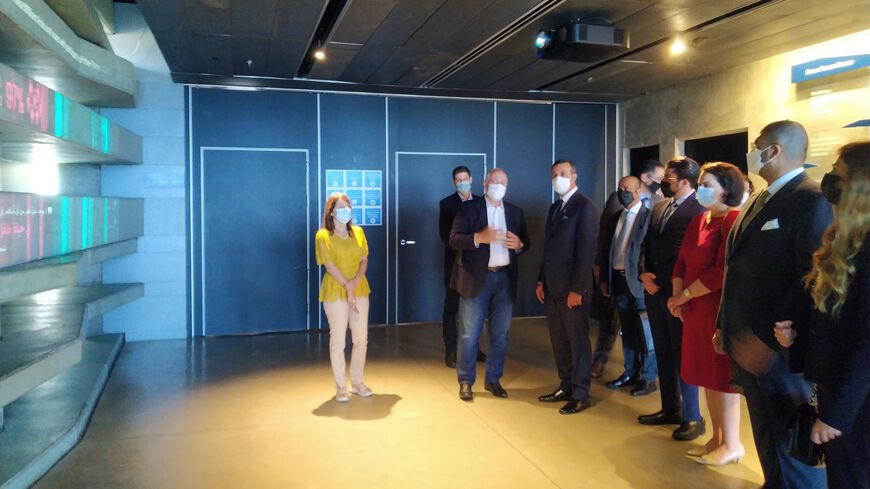 Visitors to the Peres Center for Peace and Innovation on Aug. 10 were surprised. Accompanied by a large escort of both security and staff of the center, the undersecretary for international relations at Bahrain's Foreign Ministry, Sheikh Abdulla bin Ahmed bin Abdulla Al Khalifa, arrived there for a visit. The Center’s senior adviser for governmental and international affairs, Nadav Tamir, showed him the way, with Chemi Peres — the son of the late Shimon Peres and chair of the center — welcoming the undersecretary warmly.

Khalifa was more than willing to exchange words and to have his picture taken with others, first with a woman who happened to be visiting and then with a teenaged girl. Judging by his reactions, Khalifa was delighted to discover the venue and took great interest in the story about the place and its initiatives.

A communique issued after the visit quoted Khalifa as saying, "We have been building this peace for 11 months and this is only the beginning. We have much in common and there is plenty of potential for further close cooperation.’’

Khalifa arrived in Israel on Aug. 8 for a four-day work visit. It was his third visit to Israel. His first visit took place in November 2020, when he accompanied Bahraini Foreign Minister Abdullatif bin Rashid al-Zayani. He then came again in December 2020, accompanying Bahrain's minister of industry, commerce and tourism, Zayed al-Zayani.

Khalifa’s schedule for the current visit (which ends Aug. 11) has been especially busy, and has included both formal and informal encounters.

On the formal side, Khalifa met with newly appointed President Isaac Herzog. Israeli protocol does not require a president to receive an undersecretary. Thus, the meeting signaled Israel’s great desire to honor the guest and to mark the importance of bilateral relations between the two countries. Khalifa then met Foreign Minister Yair Lapid. "This morning, I was delighted to host Bahrain's Foreign Minister Sheikh Abdullah bin Ahmad al-Khalifa during his visit to Israel. We will continue to strengthen and develop relations between the two countries,’’ Lapid tweeted after the encounter. The director-general of the Israeli Foreign Ministry, Alon Ushpiz, and the Bahraini undersecretary co-chaired a joint committee, preparing a future meeting of the Israeli and Bahraini foreign ministers. Khalifa also met with participants in the Israeli Foreign Ministry’s Cadets Course to discuss bilateral relations; it was an exceptional occasion for Israel’s future diplomats to experience first-hand fruits of successful diplomacy.

Khalifa is also expected to visit Israeli civil society organizations, universities and think tanks, all with the goal of strengthening ties between Israel and Bahrain. As abovementioned, even with such a busy schedule, the undersecretary found time also for other, less formal rendezvous. The most enjoyable was certainly diving in the Mediterranean in the north of Israel, near Rosh Hanikra (Ras al-Naquora in Arabic) together with Ushpiz. "It is a great pleasure going diving with a friend. … We took advantage of the rare chance for underwater diplomatic etiquette,’’ tweeted Ushpiz, who also tweeted a video of himself and Khalifa waving their countries' flags underwater.

On the more serious side, Khalifa took the opportunity of visiting Israel to slam the 2015 Iran nuclear deal, saying it only generated chaos across the region. He said Bahrain had hoped the deal “would open up a new page for Iran and the region, but on the contrary, it has fueled crises across the Middle East. It has increased the number of refugees that have fled into Europe. It has caused more instigation of extremism and hatred in many different regions across the Middle East.”