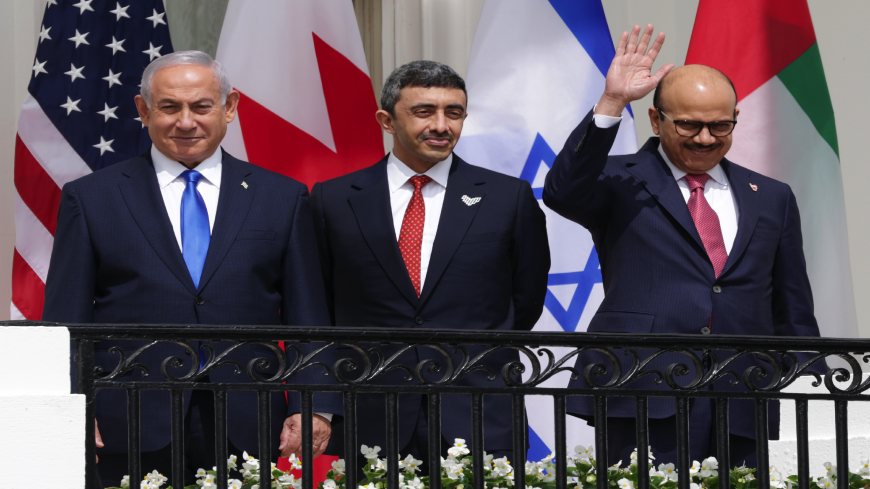 Bahrain and the United Arab Emirates formally inked normalization deals with Israel on Tuesday in a signing ceremony hailed by President Donald Trump as one that would “change the course of history.”

“After decades of division and conflict, we mark the dawn of a new Middle East,” Trump said from the White House balcony overlooking the South Lawn.

“These agreements prove that the nations of the region are breaking free from the failed approaches of the past. Today’s signing sets history on a new course, and there will be other countries very, very soon that will follow these great leaders,” he said.

The Trump administration announced in mid-August that Israel had agreed to hold off annexing large portions of the West Bank in exchange for cooperation with the UAE on various issues, including tourism, direct flights and investment.

The deal made the UAE the third Arab country to establish ties with Israel, after Egypt in 1979 and Jordan in 1994. Last week, Trump announced that Bahrain would be striking its own normalization deal with Israel.

During an Oval Office meeting ahead of the signing ceremony, Trump joked that "even Bibi gets tired of war," referring to Netanyahu. The UAE and Bahrain were not officially at war with Israel, but prior to the US-brokered agreements, did not recognize the Jewish state.

Trump added that "five or six" countries could follow in forging their own ties with Israel. Trump didn’t name which countries he was referring to, but Oman, Morocco and Sudan have been floated as likely candidates.

“This day is a pivot of history. It heralds a new dawn of peace,” Israeli Prime Minister Benjamin Netanyahu said Tuesday. “You heard from the president that he is already lining up more and more countries. This was unimaginable a few years ago."

Nahyan thanked Netanyahu for “halting annexation of Palestinian territories," which was a key factor in the UAE's decision to move forward on the deal.

“It is now incumbent on us to bring about the lasting peace," Zayani said. "A just, comprehensive two-state solution to the Palestinian-Israeli conflict will be the foundation, the bedrock of such peace.”

The deals were nonetheless denounced by the Palestinian leadership as a violation of the 2002 Arab Peace Initiative, which calls for Israel to withdraw from lands captured since 1967 before gaining any recognition from Arab states.

The Israel pacts hand the White House diplomatic wins ahead of November’s general election. Following meetings with their leaders earlier this month, Trump also announced Serbia and Kosovo will open embassies in Jerusalem.