Celebrating the historic agreements with Bahrain and the United Arab Emirates in Washington, Israeli Prime Minister Benjamin Netanyahu reached out to other Arab states. 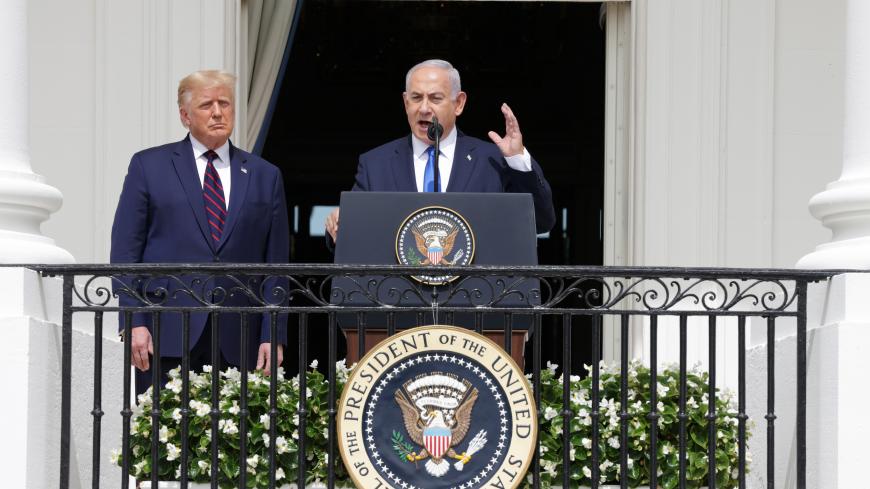 Prime Minister of Israel Benjamin Netanyahu speaks as US President Donald Trump looks on during the signing ceremony of the Abraham Accords on the South Lawn of the White House Sept. 15, 2020, in Washington, DC. - Alex Wong/Getty Images

Warnings over rockets fired from Gaza toward the south of the country appeared on Israeli TV screens minutes after Prime Minister Benjamin Netanyahu finished his speech at the White House today. Incoming rocket sirens sounded in the southern cities of Ashkelon and Ashdod, sending thousands of Israelis into bomb shelters. According to initial reports, at least two men were lightly injured and a few people suffered trauma.

Hamas was criticized for firing rockets at Israel while its prime minister delivered a message of peace, though experts noted that the rockets probably came from other Gaza groups.

Celebrating a historic achievement, Netanyahu spoke at length about the price paid by Israelis over the years, saying, “The people of Israel well know the price of war. I know the price of war. I was wounded in battle. A fellow soldier died in my arms. My brother Yoni lost his life while rescuing hostages." He added that today's ceremony “brings hope to all of the children of Abraham."

Still, Netanyahu did not refer to the Palestinians by name in his meeting in the Oval Office, nor in his speech later on from the balcony overlooking the White House lawn. "This peace will eventually expand to include other Arab states and ultimately help bring an end to the Arab-Israeli conflict once and for all,” said Netanyahu, referring to Arab states, but not to Arab peoples. Netanyahu stressed that “ultimately, strength brings peace.”

Israelis are still waiting to learn the details of the Abraham Accords signed today at the White House. Netanyahu and the other signatories have divulged little in recent weeks and up until the ceremony. Unlike other official trips, Netanyahu did not brief the journalists who traveled with him from Tel Aviv to Washington and gave no interviews to Israeli news outlets.

For Netanyahu, the two most uncomfortable issues in advancing these agreements were surely the halting of his annexation plan and negotiations with the Palestinians. US President Donald Trump said at their meeting that he did not wish to talk about annexation at the moment, promising simply that the current "transaction" presents an excellent deal for all parts involved. "We don’t want to talk about that right now. That’s working out very fair — for the people who are coming in …and for Israel,” said Trump. Still, addressing the 700 guests from the White House balcony, Emirati Foreign Minister Abdullah bin Zayed thanked Trump for halting Israel’s annexation plan.

Netanyahu brought to Washington none of his political partners, not even Foreign Minister Gabi Ashkenazi, even though the Emirates and Bahrain each sent its foreign minister. Thus, Netanyahu was forced to request Ashkenazi's power of attorney to sign the normalization agreements. Netanyahu will reportedly bring the agreements for both government and Knesset approval upon returning to Israel.

Hours before the ceremony, Ashkenazi tweeted a picture of the Israeli, Bahraini, Emirati and US flags, writing, "The four flags flying over the Israeli Ministry of Foreign Affairs today. An historic day for Israel, UAE, Bahrain and for the entire region. Thank you President Trump for your role in creating a new reality in the Middle-East."