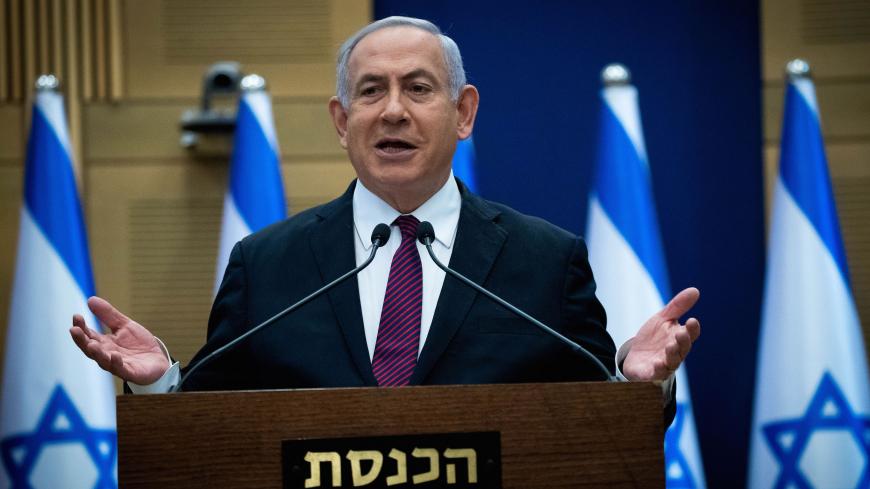 Israeli Prime Minister Benjamin Netanyahu delivers a statement to his Likud party members of Knesset at the Likud center in the Knesset in Jerusalem on Dec. 2, 2020. - YONATHAN SINDEL/POOL/AFP via Getty Images

Prime Minister Benjamin Netanyahu hailed this evening the announcement made earlier by President Donald Trump over Morocco normalizing ties with Israel. As part of the deal, the United States will recognize Morocco’s claim over the disputed Western Sahara region.

Morocco will become the fourth Arab country to normalize relations with Israel in just four months, following the United Arab Emirates, Bahrain and Sudan. The two countries established low-level ties after the 1993 Oslo Accord, but with the outbreak of the second Palestinian intifada in 2000, Rabat severed diplomatic relations. Still, Israeli tourists are allowed to visit the country. About 50,000 Israelis travel to Morocco each year, many of them tracing their family histories and heritage.

Netanyahu spoke at a Hanukkah candle-lighting ceremony conducted by the Western Wall, in the presence of US Ambassador to Israel David Friedman. "This Hannukah we are bringing a great light for the state of Israel and the citizens of Israel. First the light of the vaccine, which should bring an end to the pandemic, and now also another great light — a light of peace. I always believed in this peace, and now it’s happening before our eyes. I want to thank President Trump for his extraordinary efforts to expand peace and to bring peace to Israel," said the prime minister.

He also thanked Morocco's King Mohammed VI "for his historic decision to make a historic peace with Israel. Morocco and Israel share close ties. The Moroccan and the Jewish peoples have shared tight relations throughout modern history. Everybody knows about the warm attitude of Moroccan kings to the Jewish community there. Hundreds of thousands of Jews from the Moroccan community had immigrated to Israel, and they serve as a live bridge between the Moroccan nation and the people of Israel. These are bridges of love, solidarity, affection and tradition."

The prime minister said that to start with, both countries will reestablish liaison offices. After that, the two countries will engage in efforts to establish full diplomatic relations as quickly as possible, including direct flights.

Foreign Minister Gabi Ashkenazi tweeted this evening, "I welcome the important news from Washington today on the renewal of relations between Israel and Morocco. … This is another great day for Israeli diplomacy, a day of light befitting Hanukkah. The renewal of relations between the State of Israel and the Kingdom of Morocco is an important and necessary step in the framework of the Abraham Accords and reflects the deep and longstanding friendship and relations between our peoples. I call on more countries to join the circle of the Abraham Accords. I also extend my warm congratulations to the King of Morocco, Mohammed VI, on this brave and right decision."

The spokesperson of the Foreign Ministry office emphasized this evening that Ashkenazi and Defense Minister Benny Gantz were both updated already a few weeks ago by the White House on contacts for an agreement with Morocco. The White House also updated them today on the success of these efforts.

Journalist Barak Ravid revealed already last February such a possible trilateral deal between the United States, Israel and Morocco. At the time, he revealed that the Mossad and the National Security Council disagreed on the issue, with Netanyahu at the end accepting the stance of national security adviser Meir Ben-Shabbat in favor of such a deal.