Unlike the normalization deals with Bahrain and with the United Arab Emirates, the imminent deal between Israel and Morocco will be built on centuries of common history and heritage. 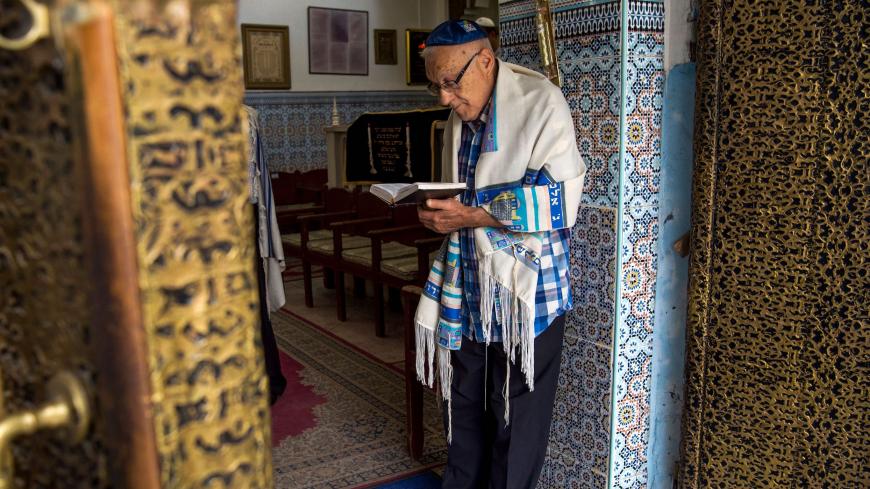 Moroccan Jews and Israeli tourists participate in a religious ceremony to observe the holiday of Sukkot (the Feast of the Tabernacles) at a synagogue in the Mellah Jewish quarter of the Medina in Marrakesh on Oct. 13, 2017.

Morocco may be the fourth Muslim country to normalize ties with Israel in the past four months, but the Dec. 10 announcement generated a special excitement in Jerusalem and elsewhere in the country. Unlike the Emirates, Bahrain and Sudan, where the Jewish communities are tiny and the history of bilateral relations rather short, Morocco and Israel share decades of contacts and centuries of common traditions and cultural ties.

Speaking at a Hannukah candle-lighting ceremony, Prime Minister Benjamin Netanyahu said, "The people of Morocco and the Jewish people have had a warm relationship in the modern period. Everybody knows the tremendous friendship shown by the kings of Morocco and the people of Morocco to the Jewish community there. And hundreds of thousands of these Moroccan Jews came to Israel, and they form a human bridge between our two countries and our two peoples, of sympathy, respect, of fondness and love."

Morocco established relations with Israel in 1995 — two years after the 1993 Oslo Accords — and the two countries opened liaison offices. When the second intifada broke out in October 2000, Morocco severed its ties with Israel and closed its Tel Aviv office. Israel responded by closing its office in Rabat and bringing home its diplomats. During this short five-year honeymoon, Israeli Foreign Ministers David Levy (of Moroccan origin) and Silvan Shalom (of Tunisian origin) visited Rabat on Morocco's official invitation.

Still, despite the 2000 severing of ties, the two countries maintained contacts and relations on different levels. Israelis can visit Morocco in organized tour groups and some 50,000 Israeli tourists do so each year. Many of them visit Jewish heritage sites and reconnect with their origins. According to some estimates, at least one million people in Israel are of Moroccan origin and an estimated 2,000-3,000 Jews remain in Morocco today. Alongside the tourists, several official delegations visited Morocco over the years, mostly in the framework of international projects and conferences. A delegation from the Trade Ministry, for instance, visited Rabat in 2005 for the fourth ANIMA Investment Network summit organized by the European Union.

The second layer of ties was more covert. Over the years, diplomats from both sides have maintained contacts. In 2002, Ynet reported that Israeli diplomats had visited Rabat and that Moroccan diplomats met with Israeli counterparts in a third Middle Eastern country. The mission was especially important to Foreign Minister Shimon Peres, who had previously enjoyed warm relations with the late King Hassan II and had visited the country more than once. The Western Sahara issue came up as well, with the Moroccans reportedly asking for Israeli technical assistance in constructing a security fence in the region.

Other contacts followed. Last February, journalist Barak Ravid reported that advanced contacts were being conducted for a trilateral deal between the United States, Israel and Morocco on normalization. In parallel, the Foreign Ministry produced a video addressing Moroccan business people in Arabic and inviting them to invest in Israel. Another encouraging sign came in Morocco's assistance in April on evacuating a group of Israeli tourists stuck in the country because of the COVID-19 pandemic and the halting of international flights. We also now know that in the past few months, the Emirates were involved in these contacts in the person of Crown Prince Mohammed ben Zaid, who supports Morocco on the issue of Western Sahara.

Clearly several interests converged in the case of Israel and Morocco. The United States (or rather President Donald Trump) and the Emirates side with Rabat on the Western Sahara, and Israel has no problem aligning with this policy. Official Israel was embarrassed on the question of Western Sahara in a 2017 incident in which Communications Minister Ayoub Kara met and had his picture taken with senior Polisario official Brahim Ghali. Kara later said he wasn’t aware of Ghali's position. Rabat was furious and Jerusalem had to make special efforts to calm things down.

Despite this head start, it is not yet clear whether normalization between Israel and Morocco will advance as quickly and spectacularly as with the Emirates. Netanyahu clearly stated that normalization will start with the reopening of liaison offices and then both countries would work toward full diplomatic ties.

"The Moroccans were always very careful and hesitant in contacts with us. Rabat is still very much attached to the Palestinian cause and to its role as protector of the Muslim holy sites in Jerusalem," an Israeli diplomat told Al-Monitor on condition of anonymity. "On the other hand, the human bridges between our two peoples are vast and ancient. Friends of mine in Morocco told me yesterday they cried in happiness when they heard the news."