Bahrain follows Kosovo and the United Arab Emirates in normalizing ties with Israel. 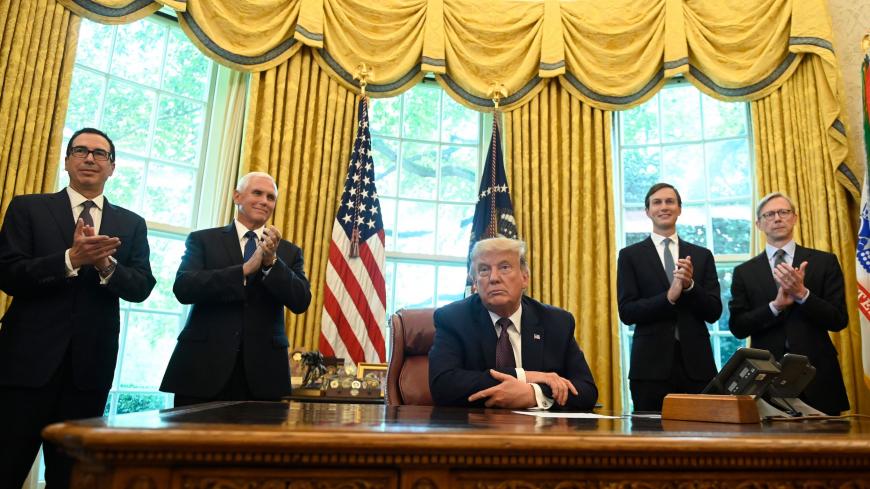 US President Donald Trump is joined by (L-R) US Secretary of the Treasury Steven Mnuchin, US Vice President Mike Pence, senior adviser Jared Kushner and US special representative for Iran Brian Hook in the Oval Office of the White House in Washington, DC, on Sept. 11, 2020. - ANDREW CABALLERO-REYNOLDS/AFP via Getty Images

“Another HISTORIC breakthrough today! Our two GREAT friends Israel and the Kingdom of Bahrain agree to a Peace Deal -- the second Arab country to make peace with Israel in 30 days!” Trump tweeted.

Bahrain’s Foreign Minister Abdullatif al-Zayani will sign the deal with Netanyahu in Washington on Tuesday, according to a statement from the White House, which described the agreement as “a historic breakthrough to further peace in the Middle East.”

The Emiratis will also formalize their agreement with Israel on Tuesday, just over a month after the Trump administration announced that the UAE would become the third Arab country, after Egypt and Jordan, to recognize the Jewish state. As part of the US-brokered pact, Israel has agreed to hold off annexing large portions of the West Bank in exchange for cooperation with the UAE on various issues, including tourism, direct flights and investment.

During a press conference Thursday, Trump hinted that another country would be “added into” the signing ceremony. Bahrain, which has close ties with the UAE, was thought to be a likely contender.

Bahrain shares a common enemy with Israel in Iran and was the first Gulf state to welcome the UAE-Israel accord after it was made public Aug. 13.

As part of a Middle East charm offensive aimed at convincing other countries to establish ties with Israel, US Secretary of State Mike Pompeo met with Bahrain’s king last month. Hamad bin Isa Al Khalifa told Pompeo that his government still adheres to the Arab Peace Initiative, which calls for recognition of Israel to be offered only in exchange for its complete withdrawal from the Palestinian territories occupied since 1967.

But in a hopeful sign for American negotiators, Bahrain announced last week it would open its airspace to flights between Israel and the UAE. Saudi Arabia also said it would allow overflights from Israel.

A deal with Bahrain is the latest diplomatic win for White House ahead of November’s general election. Following meetings with their leaders last week, Trump announced Serbia and Kosovo will open embassies in Jerusalem.