IRGC says Afghanistan exit a ‘lesson’ not to rely on US

An official from Iran's Revolutionary Guard Corps says the US exit from Afghanistan is a lesson for regional leaders. 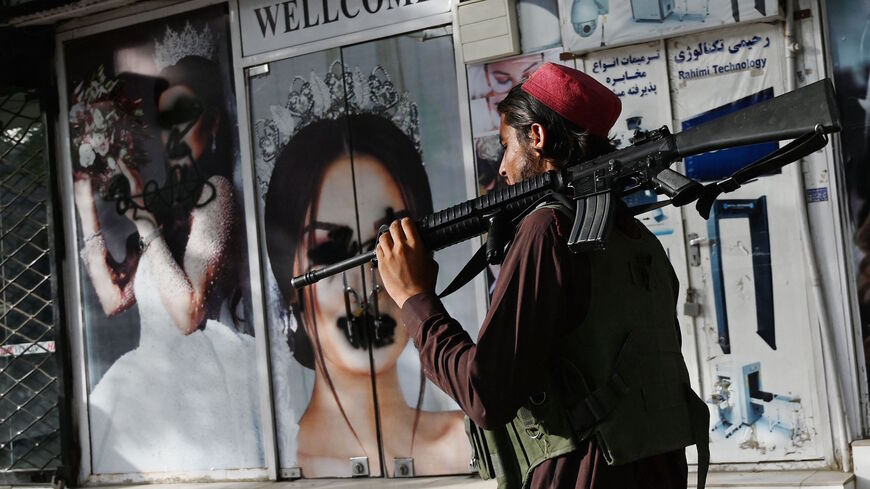 A Taliban fighter walks past a beauty salon with images of women defaced using a spray paint in Shar-e-Naw in Kabul on Aug. 18, 2021. - WAKIL KOHSAR/AFP via Getty Images

Mohammad Reza Naghdi, a senior Islamic Revolutionary Guard Corps (IRGC) official who formerly headed the Basij Organization in Iran, says the US exit from Afghanistan has brought the era of America as the sole superpower to an end.

Naghdi told Sepah News on Aug. 18 that the US withdrawal from Afghanistan “does not require complex analysis, just as we saw the failure of the British and Soviet Union empires in Afghanistan lead to the collapse of those superpowers.”

Naghdi said the US invasion and occupation of Afghanistan holds a lesson for other countries to show how the wealthiest nation in the world with all of the resources at its disposal lost to one of the poorest nations of the world. “The result of resisting against a great power is victory,” he said, adding that triumph is not achieved through arms but through “a strong will.”

Naghdi was hopeful that with the departure of American troops from Afghanistan and the evacuation of American bases in the country that more US bases in the region would also be evacuated. He said that this was the moment for regional countries to separate their affairs from the Americans.

He said any leader that has relied on the United States would meet the same end as Egypt's Hosni Mubarak and Iran’s Mohammad Reza Shah. Naghdi said that the United States is mired in a domestic crisis and that “it has become clear to everyone that the era of American superpower and totalitarianism is over.”

While the IRGC leader is gloating about the US exit from Afghanistan and internal problems in the United States, Iran has its own issues. The coronavirus continues to cause problems for the country. In the last two weeks Iran has broken the daily death record four times, most recently on Aug. 17, with 628 deaths recorded in a 24-hour period.

By Aug. 19, Iran will exceed 100,000 confirmed covid deaths. Officials have said that the actual numbers could be twice as high. A Tehran official involved with the coronavirus task force recently said that Iran intentionally withheld the true number of COVID-19 deaths from the World Health Organization.