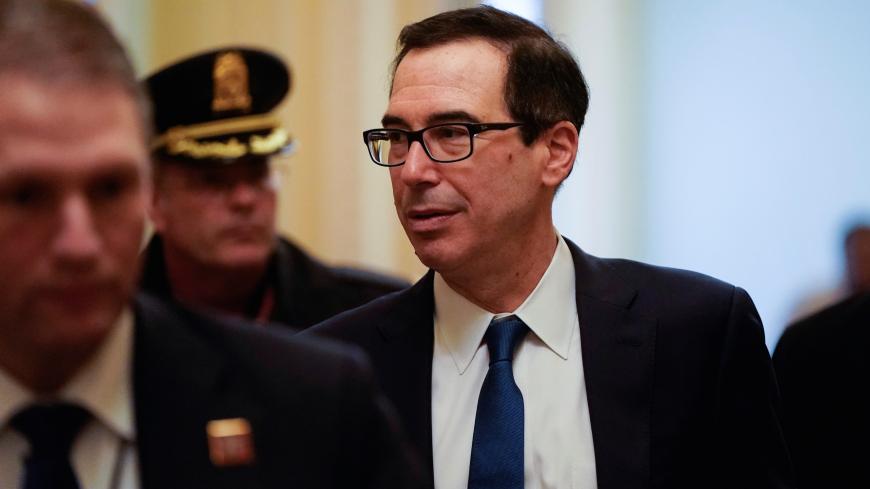 US Secretary of the Treasury Steven Mnuchin walks from a meeting during negotiations on a coronavirus disease (COVID-19) relief package on Capitol in Washington, US, March 23, 2020. - REUTERS/Joshua Roberts

In its latest round of economic penalties targeting Iran, the US government has imposed fresh sanctions on 20 companies, Iranian officials and individuals with ties to the regime’s Islamic Revolutionary Guard Corps (IRGC) and other US-designated terrorist groups.

The US Treasury Department today identified a group of Iran- and Iraq-based targets over their apparent support for the IRGC, its Quds Force foreign arm and Iranian-backed militias in Iraq.

“Iran employs a web of front companies to fund terrorist groups across the region, siphoning resources away from the Iranian people and prioritizing terrorist proxies over the basic needs of its people,” US Treasury Secretary Steven Mnuchin said in a statement today.

The sanctions freeze any US-held assets belonging to the targets and make illegal any transactions between them and American entities.

Among those designated is the Reconstruction Organization of the Holy Shrines in Iraq, which the Treasury Department claims is a front company likely set up for “embezzling public donations intended for the construction and maintenance of Shiite shrines in Iraq.” Also sanctioned are IRGC officials accused of selling Iranian oil to the Syrian government and smuggling weapons to Yemen and Iraq.

Included in the list of targets is Shaykh Adnan al-Hamidawi, the special operations commander of Kataib Hezbollah, a militia group is accused of a spate of recent rocket attacks against US troops stationed in Iraq. The United States launched retaliatory strikes against Kataib Hezbollah’s weapons facilities in mid-March following an attack on Camp Taji that killed two Americans.

The announcement of new sanctions today came as Iran deals with the region’s worst coronavirus outbreak. The Donald Trump administration has resisted calls from some world leaders and human rights organizations to ease its “maximum pressure” campaign, which Tehran says is hampering its ability to contain the virus.

Since mid-February, Iran has recorded more than 29,000 cases of COVID-19, with 2,234 deaths. A government spokesperson warned this week the Islamic Republic could face a “second wave” of the outbreak if Iranians continue ignoring restrictions on travel.

The White House, meanwhile, has pressed on with its campaign of squeezing Iran’s oil exports. Earlier this month, it blacklisted more than a dozen companies in the United Arab Emirates, China, Hong Kong and South Africa for allegedly engaging with Iran’s petrochemical industry.

The newest US sanctions came a day after the family of American hostage Robert Levinson confirmed his death in the regime’s custody. The former FBI agent, who disappeared in Iran 13 years ago, is believed to have died sometime before the COVID-19 outbreak in the country.

A spokesperson for the Iranian mission at the United Nations, in a statement on Twitter, denied again today that Tehran had Levinson in its custody.