The successor of Abu Mahdi al-Muhandis as leader of the Iran-backed Iraqi militia Kataib Hezbollah has been designated as a global terrorist by the United States. 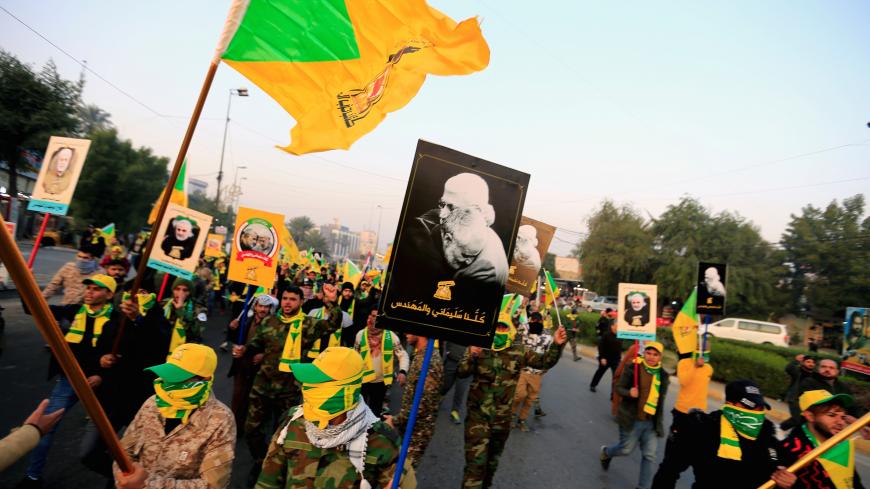 Kataib Hezbollah Iraqi militia gather in Baghdad on Jan. 4, 2020, ahead of the funeral of the Iraqi militia commander Abu Mahdi al-Muhandis, who was killed in an airstrike at Baghdad airport the day before. - REUTERS/Thaier al-Sudani

WASHINGTON — The State Department today announced the designation of Ahmad al-Hamidawi, the leader of the Iranian-backed Iraqi militia group Kataib Hezbollah, as a global terrorist a day ahead of the expected confidence vote by Iraq’s parliament on a new government.

The Iraqi militia group, which is a part of the Iraqi government-backed Popular Mobilization Units, has been designated as a global terrorist group by the United States since 2009. The United States killed Kataib Hezbollah leader Abu Mahdi al-Muhandis in a Jan. 3 drone strike at Baghdad International Airport that targeted and also killed Iranian Quds Force commander Qasem Soleimani.

In addition to storming the US Embassy in Baghdad in late December, Kataib Hezbollah “actively uses violence and terror against innocent civilians to advance the Iranian regime goal of making Iraq a vassal state,” US counterterrorism coordinator Nathan Sales told journalists at the State Department today.

Such groups “drain life and vitality out of Iraq,” Assistant Secretary of State for Near Eastern Affairs David Schenker said.

The designation of Hamidawi was made possible by US President Donald Trump’s expansion of an executive order last fall that does not require the US government to tie the individual member of the designated terrorist group to a specific terrorist attack, Sales said.

Secretary of State Mike Pompeo, in a call with Iraq’s Prime Minister-designate Mohammed Tawfiq Allawi on Sunday, “stressed Iraq’s obligation to protect US and coalition diplomats, forces, and facilities,” State Department spokesperson Morgan Ortagus said in a readout of the call. “Secretary Pompeo and Prime Minister-designate Allawi discussed the protest movement and the urgency with which Iraq’s next government must put an end to the killing of protesters, seek justice for those killed and wounded, and address their legitimate grievances.”

“We are beginning to engage with the government of Iraq such as it is, on the nature of our strategic relationship,” including economic and diplomatic issues and our presence on the ground, Schenker said today, adding there will not be a withdrawal of US forces from Iraq.