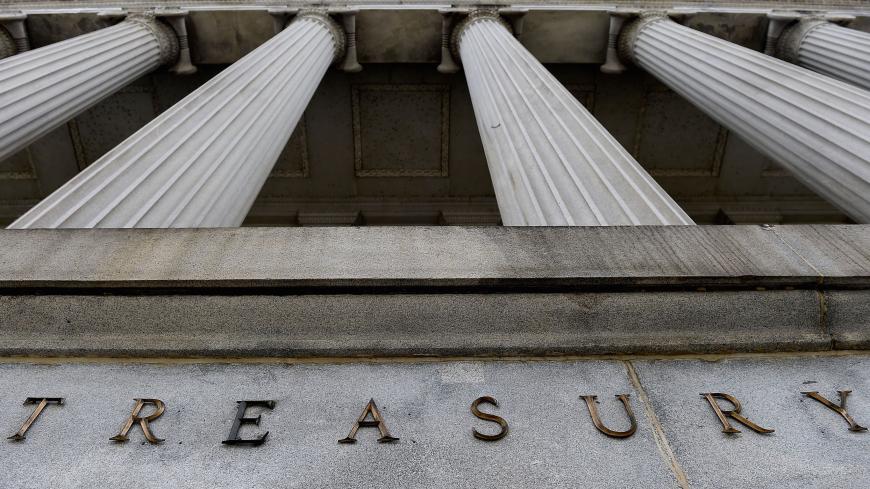 An exterior view of the US Department of the Treasury building is seen in Washington, DC, March 27, 2020. - OLIVIER DOULIERY/AFP via Getty Images

The sanctions freeze any US-held assets belonging to Amir Dianat, an Iranian-Iraqi national the Treasury Department says was involved in the shipment of missiles on behalf of the IRGC’s elite Quds Force and smuggling "lethal aid" from Iran to Yemen.

The United States also designated Taif Mining Services, a company owned, controlled or directed by Dianat, according to the Treasury statement.

“The Iranian regime and its supporters continue to prioritize the funding of international terrorist organizations over the health and well-being of the Iranian people,” said Treasury Secretary Steven Mnuchin. “The United States remains committed to working with financial institutions, non-profit organizations, and international partners to facilitate humanitarian trade and assistance to the Iranian people.”

The Donald Trump administration has imposed tough economic sanctions on the Islamic Republic since withdrawing from the landmark nuclear deal with Iran and other world powers.

In March, the Treasury Department identified a group of Iran- and Iraq-based targets over their apparent support for the IRGC, its Quds Force foreign arm and Iranian-backed militias in Iraq.

Amid calls from Tehran for sanctions relief to help address its coronavirus outbreak, the United States also designated five UAE-based companies accused of facilitating petrochemical sales in Iran, as well as nine entities based in China, Hong Kong and South Africa for “knowingly engaging” with Iran’s petrochemical industry.

Tensions between Tehran and Washington have increased up in recent weeks over their rival navies in the Persian Gulf. In April, vessels belonging to Iran’s IRGC harassed six US ships in the strategic waterway, prompting President Donald Trump to order the US Navy to “shoot down and destroy” Iranian vessels if provoked.

A week later, Iran claimed to have launched its first military satellite under a space program the Trump administration believes is used as cover for ballistic missile development.