Khamenei called on officials to acquire the COVID-19 vaccine any way they can. 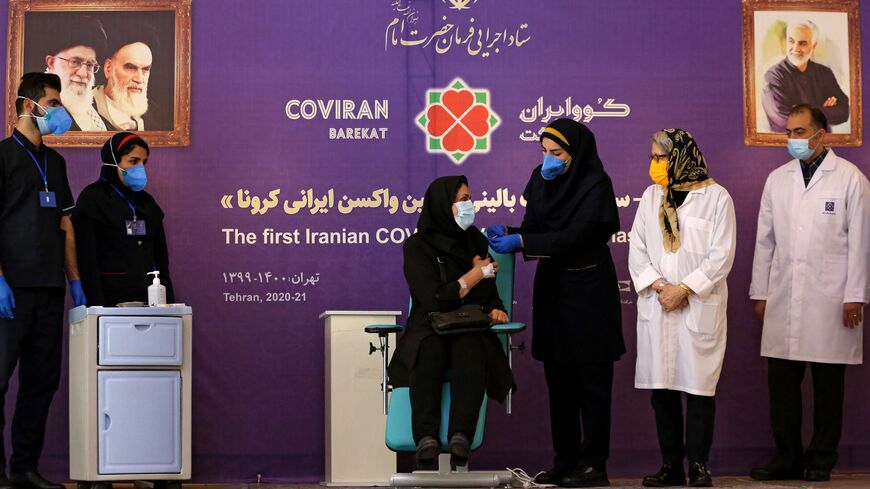 An Iranian health care worker injects university professor Mahnaz Rasouli-Nejad with a dose of a locally made Iranian COVID-19 vaccine during the second phase of trials in the capital, Tehran, on March 15, 2021. - ATTA KENARE/AFP via Getty Images

In a televised address, Khamenei said the coronavirus is the most important issue facing the country. He said daily deaths — numbering above 500 — and tens of thousands of infections are “painful.”

Khamenei added, “Whether they are imported or if they are made domestically there should be extra effort for vaccines," adding they should be secured in "any way possible" and placed at the disposal of the public. Khamenei had previously said Iran would ban vaccines produced in the West, though Iranian officials found a loophole by acquiring Western vaccines produced in countries outside the West.

Iran has had access to Russia’s Sputnik V and China’s Sinopharm vaccines. They have also acquired the Oxford-AstraZeneca vaccine, but those only produced in South Korea. Iran has worked on a number of domestic vaccines, some still in the clinical trial stage. However, production of the domestic vaccines has lagged. A Health Ministry official said in an Aug. 3 interview to ISNA that the country has not yet produced 1 million doses.

One of the ideas proposed to stop the spread of COVID-19 was a lockdown enforced by the military. Khamenei called on the coronavirus task force to review the proposal and make a “strong decision” one way or another.

Khamenei asked people to follow the health protocols in the same manner they did the first few months of the pandemic. One of the problems of the lockdowns was that people continued to travel and visit family, spreading the virus among family even though offices and stores were closed. In what appeared to be a rather optimistic statement, Khamenei said Iranians would likely only have to tolerate a few more months of restrictions as vaccines continue to be produced or acquired.

Iranian officials said Aug. 11 that in the previous 24 hours, the country had again recorded over 500 COVID-19 deaths, with the official number standing at 541. Earlier this week Iran registered its highest daily death toll — 588. There have been over 95,000 confirmed COVID-19 deaths in Iran since the pandemic started in February 2020. While officials have previously warned that actual deaths could be twice as high, the four consecutive days of coronavirus-linked deaths above 500 has alarmed both the Iranian people and officials, likely prompting Khamenei’s address.

President Ebrahim Raisi met with the country’s anti-coronavirus task force at an emergency meeting. He issued a list of nine directives to the task force related to the acquisition of medicine and vaccines.