While Iranian officials are worried about the spread of COVID-19, they hope vaccination efforts can prevent a sixth wave. 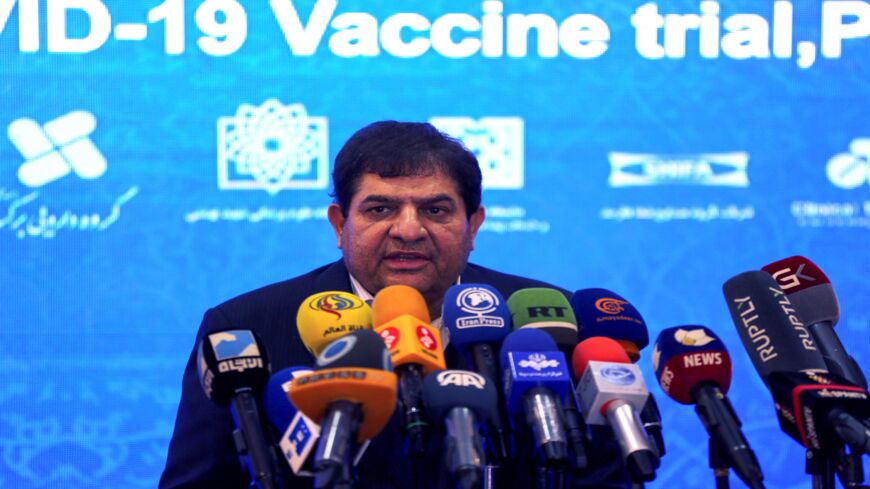 Chairman of Iran's Setad foundation, or the Execution of Imam Khomeini's Order, Mohammad Mokhber speaks during a press conference to announce the launch of the second and third phases of human trials of a locally made COVID vaccine, in Tehran, on March 15, 2021. - ATTA KENARE/AFP via Getty Images

The daily coronavirus death toll in Iran reached a new high on Aug. 9 at 588 deaths. The previous high was the day before, Aug. 8, with 542 deaths.

According to the latest numbers by Health Ministry officials, there have been over 94,000 COVID-19 deaths in the country, though the actual number could be twice as high. The spread of the coronavirus in Iran has alarmed officials, who appear to be out of options on how to stop the spread of the virus as the new administration takes office.

Deputy Health Ministry Ghasem Janbabaei said at an anti-coronavirus taskforce meeting in Bushehr the new coronavirus variant spreads faster than previous ones and warned no country is safe. He said hospitalizations for the new variant have been twice as high as the fourth wave.

Janbabaei said Iran has continued its vaccination efforts, which has lowered the death rate for the elderly. Unfortunately, this means the death rate for middle-aged people who have not been vaccinated yet has increased, he said.

He said the fifth wave of the virus will be the last due to the country's vaccination rates. Iran has used vaccines from Russia and China and domestic-made ones as well. This optimistic take on the current situation may not pan out and will be added to a long list of other optimistic takes that did not come to fruition.

President Ebrahim Raisi has been the latest official to receive the Iranian vaccine. Raisi said public vaccinations are “unavoidable and also a priority.”

The previous health minister requested a two-week military-enforced lockdown to slow the spread of the coronavirus. Former President Hassan Rouhani, at his final anti-coronavirus task force meeting, did not take up the initiative. Raisi has not yet addressed the request for a military lockdown, nor has he called for an emergency meeting for the task force he now heads.

While Raisi has not yet shown much urgency in addressing the spreading coronavirus, he has slowly begun to announce some of his Cabinet positions. Mohammad Mokhber was selected as his vice president. Mokhber was previously the head of the Executive Headquarters of Imam’s Directives (commonly referred to as Setad), which operates under the control of Supreme Leader Ayatollah Ali Khamenei. Setad was established after the 1979 Revolution and confiscated property by former government officials. It is one of the wealthiest organizations in Iran and was behind the funding of one of Iran’s domestic-made vaccines.

A one-time potential candidate for a position in Raisi’s Cabinet is Alireza Zakani, who was a presidential candidate and withdrew in favor of Raisi. Many had assumed Zakani would take a high-level position within the Cabinet. However, it seems after political dealings, Zakani was appointed Tehran mayor by Tehran’s city council. With Zakani’s ascendancy, conservatives essentially now control every major power center in Iran. No prominent Reformists or even moderates hold any positions in elected bodies.