The statement suggested the Islamic Republic's apparent willingness to work with a new Taliban-led government as opposed to the Iranian public's fury against the extremist group's fast-paced takeover. 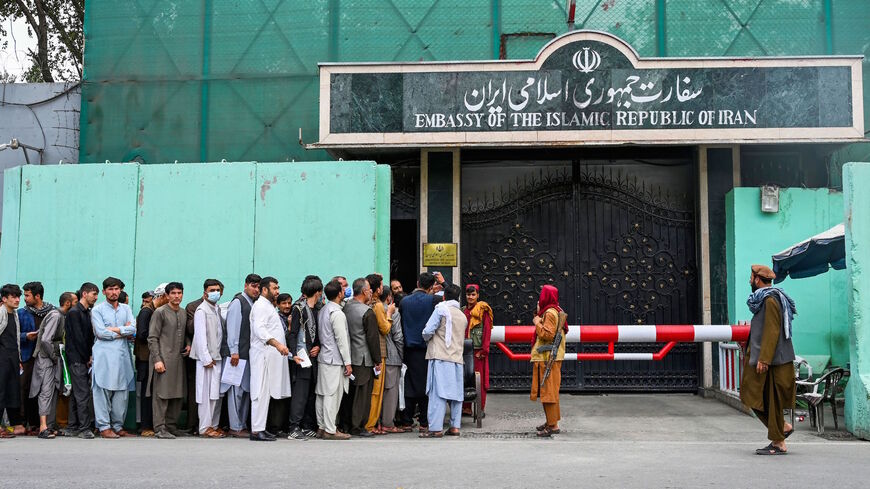 Afghans line up outside the Iranian Embassy to get a visa in Kabul on Aug. 17, 2021, after the Taliban took over Afghanistan. - WAKIL KOHSAR/AFP via Getty Images

Iran's Foreign Ministry spokesman Saeed Khatibzadeh said the country's embassy in Kabul continues its normal operations two days after the lightning capture of the Afghan capital by the Taliban. Khatibzadeh said the Islamic Republic's consulate in the city of Herat, close to the Iranian border, also remains fully operational.

The statement confirmed earlier reports that Iran's embassy was among a handful of foreign missions still open despite the mayhem, including the embassies of Russia, China and Pakistan, countries which have signaled possible recognition of an emerging Taliban-controlled Afghanistan.

In recent days, Iranian authorities have adhered to an official line of cautiousness, closely watching the alarming developments in Afghanistan while also refusing to publicly oppose or condemn the militant group. The same approach was adopted in the run-up to the ongoing situation amid the inroads by the Taliban, whom a hard-line lawmaker has controversially described as "one of the region's original movements."

In the midst of the phased withdrawal of American and foreign troops from Afghanistan, Tehran also played host to Taliban and government delegations in an apparent effort to get engaged as a key player in the Afghan political scene amid the vacuum triggered by the US pullout. In doing so, some Iranian officials and state-funded media have faced accusations of attempting to "canonize the Taliban."

The state-promoted narrative, however, has not been welcomed by the Iranian public and pro-Reform papers. Iran's social media has been inundated with messages of solidarity with the "betrayed" Afghan people. Most notably, concerns have been growing over the fate of Afghan women, whose hard-won gains in media freedoms and social inclusion are feared to be lost altogether as the new Taliban era ushers in.

"Afghan women struggled for 20 years to build themselves an identity," wrote pro-Reform paper Aftab-e-Yazd in an editorial on how "the future of Afghan women hangs in the balance" and why "there is no reason to trust the Taliban." According to the paper, the "flash story" of "the fall of Kabul" overwhelmed Afghan women with a world of "fear, sadness and concern," women who now have to "go into hiding … as the Afghan society is thrust 20 years backward in history."

Many Iranians have expressed solidarity with Afghan immigrants, who have been holding anti-Taliban rallies in the capital, Tehran, and in the central cities of Qom and Isfahan. Iran is already home to a sizable Afghan community that fled multiple episodes of wars in their country over the past decades. The Afghan ambassador in the United Nations has now urged his country's neighbors to keep the doors open amid an expected exodus of Afghans under the Taliban.

The Islamic Republic's policy toward a new wave of Afghan refugees has yet to be determined. But individual Iranians are already volunteering to embrace newcomers and even adopt abandoned Afghan children.

Apocalyptic, chaotic scenes at Kabul's international airport with desperate Afghans packing up their lives and clinging from a US military aircraft have also drawn a flood of reactions of both sympathy and rage from appalled Iranians.

The Taliban have already vowed respect for human rights and forming an inclusive government. Some Iranians, however, are cautioning Afghans not to fall for such promises, which have stirred up in their minds memories of the early days of their own country's 1979 revolution, when the fledging clerical establishment, in their view, purged all opponents through a campaign of executions, imprisonment and forced exile to secure a decadeslong rule.