Israel fears that Iran and Hezbollah will take advantage of the economic and political crisis in Lebanon to tighten their hold on the country. 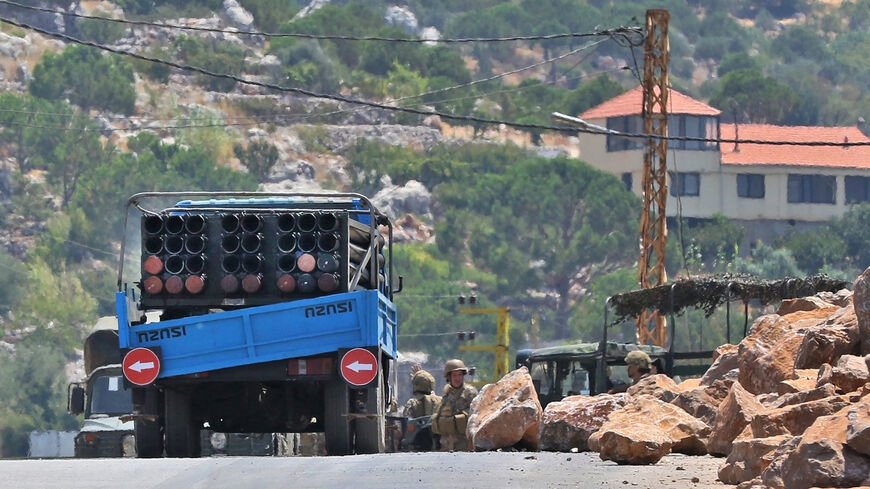 Lebanese soldiers stand next to a truck carrying a multiple rocket launcher after confiscating it in the southern village of Shouayya, on Aug. 6, 2021. - MAHMOUD ZAYYAT/AFP via Getty Images

Prime Minister Naftali Bennett is now on his way to Washington for a first official visit. He is scheduled to meet with President Joe Biden Aug. 26. Iran’s nuclear ambitions and its involvement in disseminating terrorism throughout the Middle East will undoubtedly form the center of this week’s White House talks between Bennett and Biden and his team. Sources close to Bennett told the press Aug. 23 that Israel has drawn up a strategic plan to contain Iran, block its nuclear breakout efforts and rein in its regional subversion. They said Bennett intends to try to mobilize Biden’s support for this road map.

However, in the lead-up to Bennett’s first White House visit, far less media attention is being paid to another regional actor linked to the Iranian issue who troubles Israel’s leadership just as much: Hezbollah, which is fast becoming a significant threat equal to the Iranian one. While Iran continues its slow progress toward developing a nuclear weapon, Hezbollah Secretary General Hassan Nasrallah is moving much faster to amass first hundreds and then thousands of precision missiles. Israel considers this buildup a strategic tie breaker that would enable Hezbollah to harm its military and economic infrastructure and greatly hamper the capabilities of its air force and other means at its disposal.

Discussions in Israel regarding the tipping point that will prompt action against this threat started during the administration of former Prime Minister Benjamin Netanyahu and are ongoing. While Israel focused its past offensive actions on targeting nuclear and nonconventional weapons development, it has never faced a conventional threat of this magnitude.

Hezbollah’s domestic troubles are the only bright spot on Israel's horizon. Officials in Jerusalem believe the organization is experiencing growing difficulties against the backdrop of the crisis in Lebanon and the fact that some Lebanese hold Hezbollah directly responsibility for the state’s collapse.

Col. (res.) Udi Evental, a former top military intelligence official and intelligence aide to the prime minister, said recently that the domestic arena in Lebanon reacted with harsh criticism to the barrage of rockets fired by the organization at Israel on Aug. 6. According to Evental’s analysis, following the condemnations, including by Lebanon’s Maronite Patriarch Bechara Boutros al-Rai and former Prime Minister Saad Hariri, Nasrallah was forced to deliver an apologetic speech explaining the logic of his organization’s actions and to use his influence in the media to sell the despairing Lebanese public on the importance of Hezbollah.

Unfortunately for Nasrallah, not all Lebanese are convinced that he will not drag the crumbling state into a violent clash with Israel. According to Evental, Nasrallah fears that Israel will take advantage of the dire domestic situation in Lebanon to change the strategic equation and rules of the game with his organization.

In his talks with Biden and senior administration officials, Bennett is expected to highlight the tremendous importance of beating Iran in the race to ease Lebanon’s shortage of cash, fuel, power and gas.

Concerning this Iranian race, Israel is closely monitoring two contradicting forces. On one hand, we have an Iranian oil tanker sailing toward Lebanon, with Hezbollah warning Israel and the West against trying to disrupt its passage. In parallel, we have recent comments by US Ambassador to Lebanon Dorothy Shea that the United States is trying to help supply Lebanon’s energy needs with natural gas transported from Egypt to northern Lebanon via Jordan and Syria.

Israel is enthusiastically encouraging this US initiative to ease Lebanon’s plight, fearing that the alternative of turning Iran into Lebanon’s savior could greatly strengthen Nasrallah. A sensitive idea being floated is using natural gas from Israel’s offshore fields. The plentiful deposits discovered off Israel’s coast in recent years have made it an exporter of natural gas to Egypt and Jordan. Israel is currently connected to a gas pumping network extending from Egypt through the Sinai Desert, Jordan, Syria and Lebanon. Although Israel only supplies Jordan and Egypt, it is hooked up to the pan-Arab gas pipeline.

Will the United States try to rope Israel into efforts to save Lebanon by supplying it with natural gas? Right now, that option sounds fanciful: a deal whereby Israel increases its gas supply to Egypt offering convenient payment conditions subsidized by the Americans so that Egypt and perhaps Jordan, too, can supply this surplus gas to Lebanon.

In a perfect world, involving Israel in efforts to help Lebanon could work wonders for improving the general climate in the Middle East and cutting Hezbollah down to size. But such an outcome would require diplomatic miracles. While Bennett is thought to be toying with the idea, the question remains how willing the Americans will be willing to entertain it and whether the Egyptians and Jordanians would be willing to go along. And, of course, we have yet to ask Lebanon what it thinks.