Hundreds of international observers are gearing up for the legislative elections in Iraq on Oct. 10 in an attempt to help Iraqis conduct transparent and fair elections. 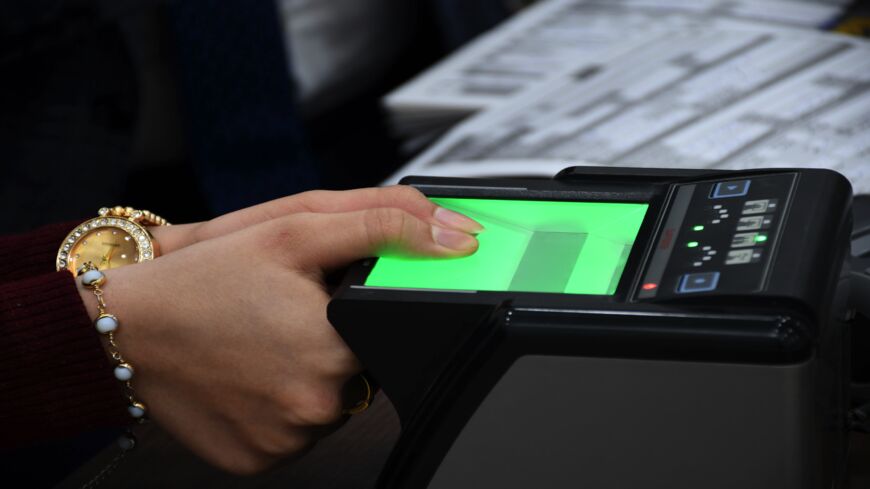 An Iraqi woman updates her voter registration at the Independent High Electoral Commission Center in the southern Iraqi city of Nasiriyah in the Dhi Qar province on Jan. 12, 2021. - ASAAD NIAZI/AFP via Getty Images

With Iraq's general elections quickly approaching in October, the country has invited international observers to ensure transparency and trust in the vote.

Judge Jaleel Adnan Khalaf, head of the Commissioners Council in Iraq’s Independent High Electoral Commission, announced Aug. 29 he had invited more than 75 countries and international organizations to observe the elections slated for Oct. 10. The elections, which were called early by Prime Minister Mustafa al-Kadhimi in response to mass anti-government demonstrations in 2019, had initially been slated for June but were pushed back to allow more time to prepare.

“By inviting international observation missions, we aim to send a message of reassurance to the Iraqis and the international community regarding the elections,” Khalaf said.

During his meeting with a group of Arab and foreign media delegations on Aug. 26, Kadhimi affirmed, “The upcoming legislative elections will be fateful and decisive.” His choice of language reflects the critical importance these elections hold.

Hours after his statement, Iraqi authorities announced their capture of hackers who specialize in cyber blackmail and who were planning to rig the upcoming elections and alter the results.

“This group has hired experts to try to rig the upcoming legislative elections and harm the contestants,” the Iraqi Supreme Judicial Council said in a statement.

The upcoming elections are all the more important since they are being held following pressure by protesters who have been swamping the streets of Iraqi cities since October 2019. The protests succeeded in bringing down the government of former Prime Minister Adel Abdul Mahdi and led to Iraq's parliament amending the electoral commission law. Early elections were a key demand of the protestors.

With all the challenges currently facing Iraq, most notably at the political level, international observer teams are getting ready to begin their observation mission. On Aug. 25, Hasan Salman, the director of media and mass communication at the Independent High Electoral Commission, announced in a press statement that 100 observers will attend from the United Nations and 130 others from the European Union. He stressed that observers will have freedom of movement in all voting centers during the electoral process.

The presence of international observers in Iraq has been a topic of controversy over recent months. Some protesters called for these observers to supervise the vote. Meanwhile, major political parties stressed the need for monitors' tasks to be restricted to observation.

Iraq seems to be counting on these teams to be a catalyst in sending a positive image of the elections to the international community. For their part, the observers and the countries they represent are counting on the Iraqi government to provide them with protection in light of the proliferation of weapons and the participation of armed groups in the elections through their political parties.

In this context, US Ambassador to the United Nations Linda Thomas-Greenfield said, “We reiterate our appeals to the government of Iraq to take all measures to protect the UNAMI (United Nations Assistance Mission for Iraq) election monitoring team, EU observers, domestic monitors, and all other individuals deploying throughout the country to deter election fraud and contribute to the integrity and transparency of the election process.” UNAMI was created in 2003 and provides assistance on the electoral process as part of its role in the country.

It seems the international community is trying as much as possible to help create a stable electoral atmosphere, paving the way for the formation of a new government and parliament capable of restoring the situation to what it was before the protests of Oct. 1, 2019. These efforts are all the more critical amid the tensions engulfing the region, which pushed top regional states to meet at the Baghdad summit on Aug. 28.

Osama Mohsen, Iraq programs manager at the German Friedrich Ebert Foundation, told Al-Monitor, “The Iraqi elections are very important. We will be present to observe them. As international observers, we support the conduct of free and fair elections in Iraq. We will use modern technologies to observe the elections, most notably electronic platforms. International observation plays a positive role in securing a transparent electoral environment.”

He added, “We will not be the only international observers present. We have projects with a group of organizations, such as the Tammuz Organization for Social Development Network, which has allocated 600 local election observers. We also have another project with the Iraqi Observatory for Human Rights to monitor and analyze media electoral discourse. We believe the role of the international community is crucial in observing the upcoming Iraqi elections.”

Despite the local and international preparations to observe the elections, warnings of possible fraud still persist. UN Iraq Special Representative Jeanine Hennis-Plasschaert affirmed in a press statement on Aug. 26 that “the credibility of the process will prove essential for Iraq’s future.” She asserted that successful elections are the responsibility of Iraq stakeholders and authorities.

For his part, Iraqi writer and political researcher Yahya al-Kubaisi questioned the roles of international observers in the previous elections. He said their previous roles were misleading and therefore cannot be relied on to observe the upcoming elections.

Kubaisi wrote on Aug. 19 that “the international community is not ready to face the state of political instability in Iraq. It is keen to maintain the existing fragile calm and avoid new challenges, and for this purpose it is willing to overlook the systematic fraud that will happen.”

One may say that international observation will have a positive role in achieving some integrity in the upcoming elections; it will not, however, prevent all kinds of negative interference.