Graffiti artists in the Gaza Strip are painting murals across the besieged enclave after the latest Israeli war to send a different kind of message to the world. 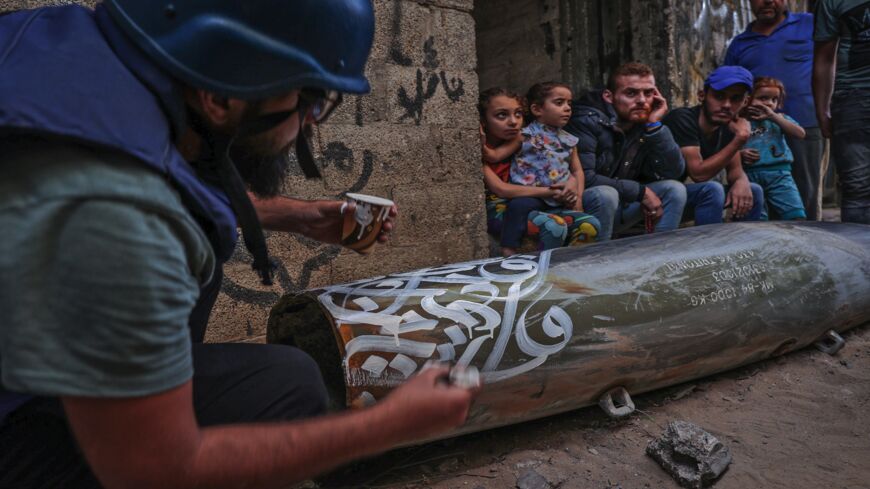 Palestinian artist Bilal Khaled draws on an unexploded device in Gaza City on May 20, 2021. - MOHAMMED ABED/AFP via Getty Images

“After a quick visit that lasted for 90 days, during which I lived the most beautiful moments with family and friends and went through a bitter war on Gaza, my body left this warm city. But my soul remained there with the hope that I will return to it soon.”

With these words, Palestinian artist and photojournalist Bilal Khaled began talking to Al-Monitor.

Khaled, 28, was born in Khan Yunis in the southern Gaza Strip.

“I never imagined that my first Eid holiday in Gaza after five years abroad would be anything like that. But we were determined not to leave Gaza alone in these difficult circumstances,” he said.

“I began practicing the art of graffiti when I was 14 years old. After I graduated from university, I decided to dedicate more time and focus on graffiti art, and I combined it with Arabic calligraphy. I was the first artist to bring calligraphy, typography and graffiti to Gaza,” Khaled said.

“I made beautiful drawings and people loved them, asking [me] to draw paintings on the walls of their homes or on their cars, even on clothes, bags and other places. My work and prints are scattered everywhere in Gaza," he added.

Khaled worked as a photographer during the recent aggression on the Gaza Strip, documenting the war in the coastal enclave.

When the war was over, he put down his camera and picked up his brush, and then he began spreading colors across the besieged enclave that came under a salvo of Israeli rockets. He wanted to turn the ugliness of destruction into beautiful art and colors.

Khaled recalls the days of the war, covering the developments under heavy bombardment.

“We turned the destruction missile, the rocket, into a piece of art. I wrote on the rocket the words of Palestinian poet Samih al-Qasim: ‘Children die and old people die among us, but we don’t surrender. Women fall on the dead bodies of their children, and we don’t surrender,’” he said.

Commenting on whether it is dangerous to draw on a missile that didn’t explode, Khaled said, “Every Palestinian artist resists with his brush, just like a photojournalist who resists with his lens. A paramedic resists by providing treatment, and civil defense men save people. All people in the Gaza Strip are resisting because they are under siege. What is required of every young man and woman as well as old people is to resist, each in their own way. Resistance is not restricted to the fighters who carry their rifles. Everyone fights with their soul.”

Khaled went on to say with a lump in his throat, “On the ruins of al-Jalaa Tower — the building that housed press and media offices such as Al Jazeera and The Associated Press — we left our message to the occupier reminding them that press is not a crime.”

Among the many murals he painted after the war, there was one titled “Righteousness is my weapon, and I will resist.”

“These words are taken from the song of Lebanese singer Julia Boutros, who calls on people to persevere and remain steadfast — a song that gives people hope,” Khaled said, adding that before he starts any project, he studies the area to make sure the mural will fit.

“Everything, even the tiniest detail, has great importance in the meaning of an artistic painting,” he said.

“I think the Gazan society has not seen the culture of graffiti and calligraphy the way other communities have. All artists in the Gaza Strip are striving to convey their message and symbolic connotations. I try to make my drawing distinctive through Arabic calligraphy, and I try to draw huge murals, which are something new in our society,” Khaled explained.

“In 2015, I painted a mural titled ‘Besieged Childhood’ on the Zafir 9 Tower, and another one next to the Governor Palace near the houses that were completely demolished in the 2014 aggression,” he said.

Khaled considers himself to be a resistor of a special kind and believes every person is capable of resisting occupation and injustice in their own way. The last mural he did was titled “The Spirit That Fights in Us.”

Yazid al-Talaa is a Gazan artist who also simultaneously practices the art of graffiti and Arabic calligraphy.

He believes paintings and drawings convey a message more powerfully than words and bullets during times like these. “Art is a universal language and drawings are understood by everyone. They don’t need translation or explanation,” Talaa told Al-Monitor.

“The colors in the rubble and darkness show the contrast between life and destruction. Art is a message that confirms that we still exist. The Gaza Strip is a flashpoint, so any work of art there can reach the world quickly,” he added.

Although they might have different goals, Gaza’s artists agree, according to Talaa, in conveying the images of pain and hope in the coastal enclave to the rest of the world.

“Palestinian artists do not stop at documenting pain and destruction on ruins only, as their paintings have a deeper meaning,” he said.

Ahmed Muhaisen, head of the General Authority for Youth and Culture in Gaza, told Al-Monitor, “The work of graffiti and calligraphy artists Bilal and Yazid is appreciated, especially in documenting and conveying the suffering of our people to the world through what they create."

Muhaisen stressed that Palestinian artists like Khaled and others are considered role models because they commit themselves to their causes and the concerns of their homeland and people, and they harness their capabilities to serve national causes.