Graffiti continues to decorate the Gaza Strip as young Gazans use it to express everything from politics to love. 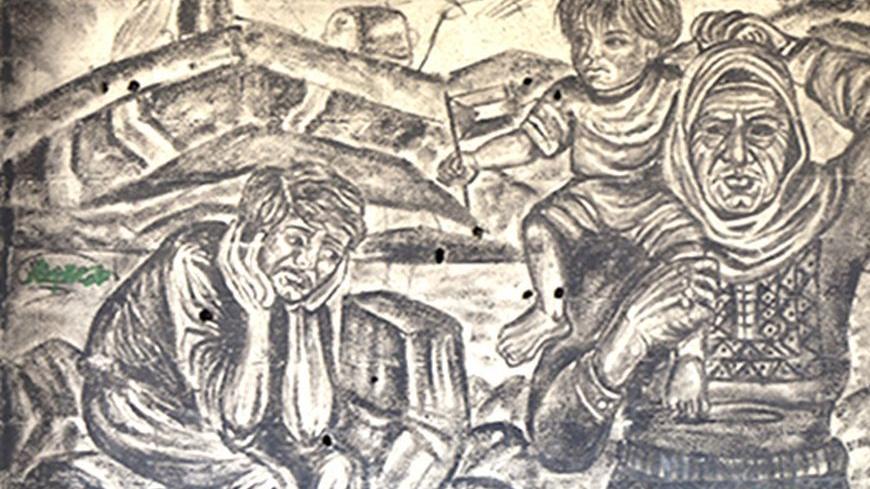 Graffiti in Gaza has evolved to the point of becoming an end in and of itself, and not a means by which to convey any political or social message, October 2013. - Sami Haven

GAZA CITY, Gaza Strip — Stark colors, subdued colors; sometimes beautiful, other times childish lines. Old words covered in a coat of white paint, itself covered in new verses again. Slogans atop one another, representing Hamas, the Quds Brigades or the Popular Front. Walls weakened by years of slogans and canvases, scratched out and redrawn, ad infinitum.

Political rhetoric transformed into congratulatory messages after a successful pilgrimage, wedding or release from prison. Walls quickly cleaned only to be re-adorned with ads and phone numbers for burial or taxi services, adjacent to the painting of a rocket proclaiming the formation of a new military brigade. Such is Gaza, an open book whose pages are written on concrete.

During the first intifada

Movie director Abdel Salam Shehadeh described to Al-Monitor the graffiti since its appearance in the 1980s. He called it “one of the few ways by which the occupation could be challenged during the first intifada. At the time, young resistance fighters used to write statements and warnings on the walls of refugee camps aimed at the camp’s inhabitants, cautioning them about the use of Israeli merchandise, for example, or announcing the dates of business-closure strikes, and the names of martyrs or informants.” He noted that many young men were killed as they wrote and drew on the walls, or arrested by Israeli troops for having paint on their hands.

Shehadeh went on to say that an Israeli special operations unit called “the Arabized Samson Unit” used to pursue graffiti writers and force their families to wash the paint off the walls. They sometimes even forced all the men living in a particular alleyway to clean the walls together. He said, “Occupation forces tried to ban the sale of paint, and when that failed, they started employing special vehicles that sprayed the walls with black tar.

“During curfews, which used to last for days, graffiti on walls was the only means by which to communicate and spread news. Throughout the first intifada, Hamas gave this art form great attention as far as the use of proper calligraphy and grammar, which helped it gain the upper hand over other competing factions that also resorted to writing graffiti on walls,” Shehadeh added.

In the early 1990s, Shehadeh produced 10 full hours of film depicting graffiti painted all over the Gaza Strip, with the goal of producing a documentary about the subject. However, he quickly abandoned the project because “the Arabic language used to write the graffiti would have restricted the film to the local market.”

Artist Fayez al-Sersawi believes that the lack of publications, newspapers and media outlets gave special import to the use of walls as a medium, especially during the early stages of the intifada.

“Writing on walls was akin to penning political messages emanating from the unified national leadership of the time. It was the most widespread method, whereby not a single house wall was devoid of these writings and slogans, which embodied a real battle fought against the occupiers,” Sersawi told Al-Monitor.

Sersawi recalled an incident in the 1980s, when he was strolling through the streets of Gaza with Australian artist George Gittoes, who looked at the graffiti adorning the walls of Omar al-Mukhtar Street and said, “I wish I could take a piece of these walls with me and put it on display in Australia.”

Sersawi said that after the signing of the Oslo Accords, the adopted political line changed. “I remember that [the Palestinian Economic Council for Development and Reconstruction] initiated a program to clean all of Gaza’s walls at a cost of about $10 million, in order to reflect the beginning of the new post-Oslo phase.”

Part of the culture

There aren’t many references or writings that deal with the graffiti movement and its slogans in Gaza, except for the novel Al Jarad Youhib al Batikh (Locusts Love Watermelon) by Palestinian author Radi Shehadeh, which chronicled the movement’s evolution in the 1980s, and another book published by Swedish photographer Mia Gröndahl, who documented in pictures Gaza’s graffiti scene from 2002 to 2009.

Graffiti writing has become part of the local culture in the Gaza Strip. Most of these writings today primarily reference Hamas. The rest consist of business advertisements and some others of a familial or personal nature. Among them can be found, “Hamas’ hope flows through the veins of the nation,” “Our motto is to serve students,” “The family congratulates the bride and groom,” “May God accept your pilgrimage, forgive your sins and fulfill your wishes” and “R+S=love.”

The graffiti tradition led to murals becoming part of the Gaza landscape. Sersawi told Al-Monitor: “The mid-1990s saw the spread of a phenomenon whereby temporary murals would be painted to commemorate national or international occasions under the supervision of civic organizations. These included murals 10 meters in size commemorating Nakba Day or even Women’s Day, their beauty making them ideal to convey certain messages.”

Artist Ahmad al-Shaarawi stood in front of a huge mural painted in bright colors on one of the walls lining Omar al-Mukhtar Street. The idea for the mural, titled “Thawra” (Revolution) is his, and 11 other artists helped him paint it.

Most passersby paused to admire the mural, prompting Shaarawi to smile and say, “People’s attention is mainly drawn by the unusual nature of the painting, and the care that went into executing it. We first drew a sketch and then transferred and colored it with material provided by the Ministry of Culture.”

He explained the meaning of the painting to Al-Monitor. “I tried to use Arabic and English letters in a new way. My message calls for the unity of the Palestinian people. The variety of faces that we see reflects the diversity of our society, which we must embrace.” He also pointed out that he used Western-style street art to draw his lines and merge them with the painting, in order to escape the old patterns of traditional symbols prevalent in Palestinian paintings and direct political messages.

Graffiti has evolved to the point of becoming an end in and of itself, and not a means by which to convey any political or social message. In the al-Nuseirat camp, located in the center of the Gaza Strip, artist Naim Samsoum goes out to practice his nightly hobby of painting graffiti on dozens of the camp’s walls using the street-art style, which resembles graffiti found in European train stations.

“I go out at night to paint and often get into trouble with security officers when they notice the paint can in my hand. I do not paint to express any particular political views, for we have grown tired of them all. Instead, I paint the letters of my name, and sometimes draw letters in a freestyle form, with the help of my friend Muhannad al-Assar. In short, this is our hobby,” Samsoum told Al-Monitor.