The Women on Walls project is supporting female graffiti artists, who are still facing many challenges, including sexual harassment, when creating art on the streets in Egypt. 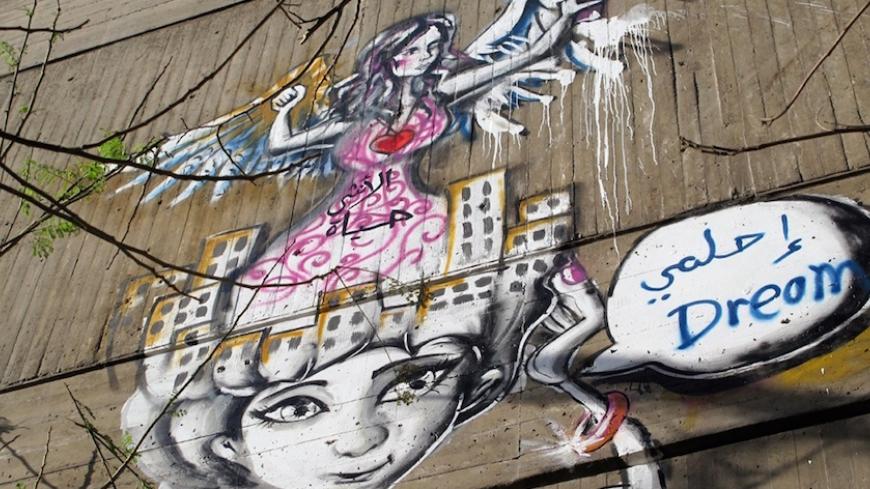 Graffiti in Cairo, picture taken in 2015. - Women on Walls

In downtown Cairo, a graffiti drawing shows a woman stuck between dozens of men who are blaming her for being sexually harassed. The painting, which is one of hundreds tackling women’s issues in Egypt, appears on one of the walls of a street near Tahrir Square where widespread demonstrations took place during and after the revolution.

“We have been using the walls to address one of the most important topics in Egypt: the challenges women face in a conservative society that involves many different issues, including the political, the social, the economic and the cultural,” Dina Saadi told Al-Monitor. Saadi is one of the female graffiti artists whose graffiti drawings appear on Cairo's street walls as part of a public art project dedicated to women and the issues they face.

The project, titled Women on Walls, has been bringing the woes of Egyptian women to the walls of outdoor spaces with the aim of empowering them through street art and encouraging female street artists to participate in the political scene of graffiti.

“Because Egyptian women have always been an essential part of any political or social revolution, the project has introduced them and their issues into public spaces and made them more visible on the walls,” Saadi said.

In December 2012, the Women on Walls project was founded by Mia Grondahl, a Swedish photojournalist and street art documentarian, and Egyptian artist Angie Balata, with funding from the Danish Center for Culture and Development.

In the past few years, the project has been growing rapidly; so far, 7,200 people have "liked" the Facebook page and the project's blog has developed into a website that documents all its art pieces and events.

The project has organized events in Cairo, Alexandria, Mansoura and Luxor, which included painting sessions, workshops and lectures on topics ranging from art to the more general issues involving women.

Khadija Moustafa, a young female artist participating in the project, said that it has given female street artists the opportunity to express their ideas, empower other women and highlight their struggle through street art.

"Walls are the easiest way to address the Egyptians as they pass by them each day. [Art on the] walls can get them closer to realize the hurdles women face in the country," Moustafa told Al-Monitor.

In 2013, Grondahl published a book titled “The Revolution’s Graffiti” that is a record of the work of Egyptian graffiti artists during the revolution.

Grondahl and Balata founded the Women on Walls project when they realized that among the 17,000 graffiti artists mentioned in Grondahl's book, there were only about 250-300 featuring women-related issues. They launched projects in several downtown areas where they featured works about sexual harassment, female genital mutilation and other issues.

In 2014, the Women on Walls project cooperated with several women’s rights groups, including HarassMap and Nazra for Feminist Studies, which allowed the project’s artists to explore future collaborations.

The group also organized a street art festival in Jordan with female artists from Palestine, Jordan and Lebanon.

Street art was not a widespread phenomenon before the January 25 Revolution. However, following the revolution it quickly became one of its most powerful tools. Graffiti has started to be used as a form of popular protest, and it has become an effective way to spread the message of political rebellion.

On the walls of downtown Cairo and the surrounding areas, graffiti that include political satire, murals depicting pharaonic and biblical themes, tags for social and political movements as well as paintings of martyrs can be seen.

Despite its popularity during the revolution, the protest graffiti remained a largely male space with men dominating the street artist community and very few pieces showcasing women and tackling their issues in the country.

In reaction, a host of graffiti movements have been initiated to increase the visibility of women in public spaces and boosting the number of female graffiti artists. One of these movements is the Graffiti Harimi project, which is the predecessor of Women on Walls. The project has also sought to raise awareness about women’s issues through street art and has served the purpose of denouncing the abuse of women.

Graffiti artist Jacqueline George told Al-Monitor that female graffiti artists are facing uphill battles in Egypt, as they live in a conservative society with old-fashioned ideas about religion and gender.

George added that it is not only female graffiti artists who are suffering in Egypt, but male artists as well. “It is really hard to create graffiti drawings on the streets of Egypt because people are still not familiar with it. But that has not stopped the art of graffiti in Egypt," she said.

“Despite the challenges, graffiti artists are still adamant about using street art to address political, economic, social and cultural issues on the walls — for ordinary citizens to notice,” she concluded.