Local travel companies, in cooperation with the Ministry of Tourism, are organizing trips for Gazans to discover the many hidden archaeological sites spread across the besieged enclave. 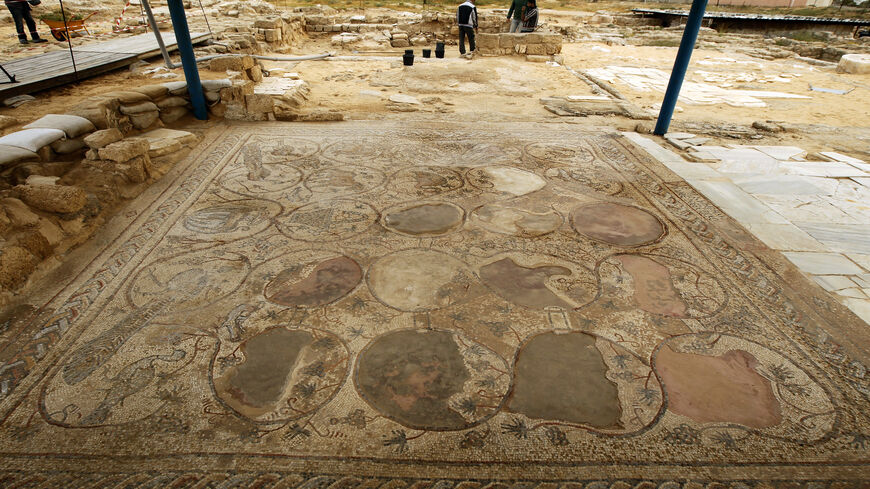 A large mosaic is pictured at the archaeological site of the Saint Hilarion Monastery, one of the largest Christian monasteries in the Middle East, in Tell Umm al-Amr close to Deir al-Balah, in the central Gaza Strip, March 19, 2013. - Mohammed Abed/AFP via Getty Images

GAZA CITY, Gaza Strip — Local tourism companies in the Gaza Strip are focusing on domestic tourism in light of obstacles hindering foreign tourism. The almost continuous closure of the Rafah border crossing with Egypt has made movement more difficult, while religious tourism has nearly ground to a halt because of the coronavirus pandemic.

The pandemic has also prevented Palestinians from performing religious pilgrimage in Saudi Arabia since February 2020.

Local tourism in Gaza is one of the key economic sectors that drew the concerned authorities’ attention. The sector has potential to employ a significant portion of Palestinian manpower and curb the soaring unemployment rate.

It became all the more important amid the disappearance of incoming tourism in light of the strict Israeli siege imposed on the enclave, the closure of the crossings that connect it to the outside world, and the security and political tensions in the region. Four protracted military assaults have been waged on Gaza in 2008, 2012, 2014 and most recently in May this year. These wars have ravaged the coastal enclave and deprived it of an important source of income, namely foreign tourism.

The history of the Gaza Strip spans 4,000 years. It is home to many Roman and Byzantine monuments, such as the Byzantine Church, the Church of Saint Porphyrius and the Great Omari Mosque, and antiquities dating back to the medieval Islamic period, in addition to the Commonwealth Gaza War Cemetery, Pasha Palace, Hamam al-Samra, and others.

The revival of domestic tourism is not limited to visiting archaeological sites, but extends to recreational events. Tourist attractions consist of a large group of rest houses and seaside resorts stretching along the coastline from Beit Lahia in the north to Rafah in the south.

Al-Monitor went on one of the trips organized by the Ministry of Tourism and local tourism companies. The participants were surprised to see places they did not know existed in Gaza, especially those that date back more than a thousand year.

Rima Selim, one of the participants, told Al-Monitor, “I was excited about this trip. I got to discover the history of my country and the monuments that attest to the civilizations that once thrived in the Gaza Strip. This made me love my country even more and I am proud to belong to it.”

Selim added, “We visited several historical and archaeological sites, such as Beit Sitti, the historic gates to the Old City, Salah al-Din Road, Gaza’s train station, Tal al-Mentar [one of Gaza’s old gates], Al-Falah Islamic School, the path of Sultan Abdul Hamid, al-Bosta Street, the old municipality, Pasha Palace and Sheikh Kaddoura al-Halis monument. The trip ended at the Gouna Beach resort. I will definitely book the next tour. These trips develop our knowledge of the archaeological sites and heritage of our country.”

Hoda Abed praised the ministry’s initiative as innovative and useful. She told Al-Monitor, “It kickstarts the tourism sector and the services are excellent. The trip supervisors and guides were wonderful and cooperative. Although the places we visited were few compared to the sites that exist in Gaza, I learned many interesting and amazing historical facts.”

The head of Maimas Tourism and Travel company in Gaza, Abdullah al-Lulu, told Al-Monitor, “Tourism in the Gaza Strip has been greatly affected by the blockade and the closure of the crossings. This led to the closure of many prestigious tourism companies. We relied on external tourism from Arab countries such as Egypt, Morocco, Tunisia, the United Arab Emirates, Jordan and Saudi Arabia, whether recreational tourism or religious tourism.”

Lulu added, “The economic system in Gaza is fragile with low levels of income among Gazans, who cannot afford to travel for tourism purposes. This is why we sought to revive domestic tourism by organizing trips to archaeological sites.”

He explained that three companies — Maimas Travel and Tourism, Zajel Tours and Taiba Travel and Tourism — cooperated to organize these trips to familiarize citizens with the history of their country. “Most countries with an ancient history encourage domestic tourism, which is one of the most important sources of national income for Egypt, Tunisia, Morocco and Lebanon for example,” he said.

Lulu said that the citizens’ ignorance of the landmarks of their country and their eagerness at the same time to learn about them was one of the main reasons that prompted the organization of these trips. “There is a moral and patriotic dimension in introducing people to their history and their homeland,” he added.

He noted that some did not think the idea was viable. But as the tours kicked off, positive feedback contributed to their success and popularity. Lulu said, “These trips are a good idea to break the dull routine. Local tourism companies did not content themselves with historical and archaeological trips. We encouraged visits to recreational sites to revive them economically after a long period of stagnation. These sites include the Gouna Beach resort, the Seaside Platform and Sharm amusement park. Children have been confined at home for more than a year, and school and family trips have been canceled due to the coronavirus pandemic. This is not to mention the recent aggression on Gaza, which greatly affected them psychologically. Our children are in dire need of such recreational trips.”

The chairman of the board of directors of Taiba Travel and Tourism company, Tamer Abu Salem, told Al-Monitor that the initiative aims to highlight the beautiful places that citizens often overlook, at a nominal fee of $12 per person. “This is a low price for the services provided, including breakfast, lunch and transportation,” he said.

Abu Salem expressed his great satisfaction with the increasing demand of the trips organized by his travel agency. He said his company will keep organizing these trips and expand them in the future in light of their positive impact on the citizens' longing for a break from all the suffering in the Gaza Strip.