Saher Ismail, adviser of the education minister, was killed this week outside his house in the Israeli-Arab town of Rameh; he was the 74th Israeli-Arab murdered since the beginning of the year. 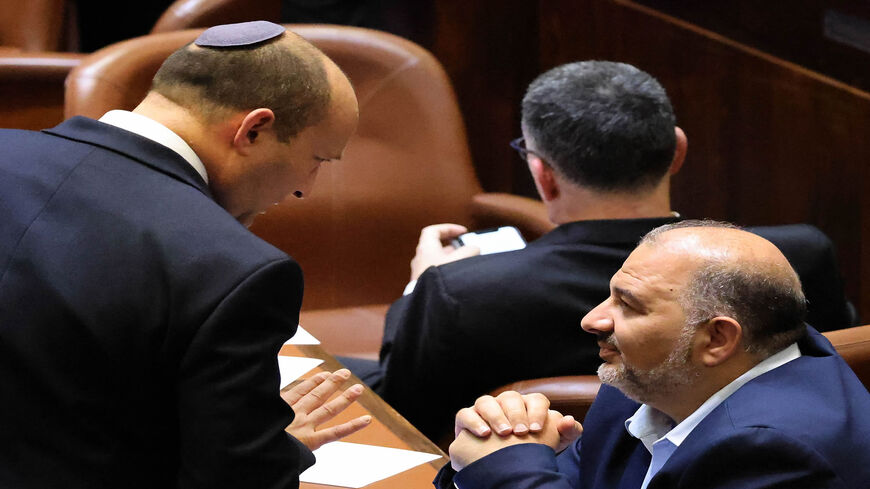 Head of Israel's right-wing Yamina party Naftali Bennett (L) chats with Mansour Abbas, head of the conservative Islamic Raam party, during a special session to vote on a new government at the Knesset, Jerusalem, June 13, 2021. - Emmanuel Dunand/AFP via Getty Images

It was another run-of-the-mill morning for Saher Ismail, adviser to Education Minister Yifat Shasha-Biton. On Aug. 15, Ismail left his home in Kafr Rameh in the Galilee, said goodbye to his wife and six-year-old son, and got into his car to go to work. A few minutes later, he was mowed down by a hail of bullets.

Ismail, 50, was a familiar figure in the national political scene. His death left many unanswered questions, but most of all, it left people stunned. Who could have wanted to see a person like that dead? There was nothing unusual or suspicious about him. For years, he was a prominent Likud activist in the Arab society, and a close friend of Justice Minister Gideon Saar. Had he been threatened by criminals because of his ties to people in power. Were they trying to extort him? Only one thing was certain. His murder was planned well in advance.

The police launched an investigation, but so far, they have come up empty-handed. The way it looks now, it is highly likely that it will go unsolved, too, just like dozens of murder cases in the Arab society in the last year alone.

The statistics are chilling. Ismail was the 74th victim of a series of murders in Arab towns or villages since the start of this year. Some targeted innocent victims, random passersby and even young children. This is what’s happening in Israel’s backyard, after years of neglect and inadequate budgets for infrastructures and education. While budgetary allocations to Arab localities have been more generous over the last few years, it is still just a drop in a bucket. The crime rate has grown, and the number of illegal guns in criminal hands has grown along with it.

It is a frustrating reflection of the situation that Ismail’s murder occurred just a few days after Prime Minister Naftali Bennett introduced a new, nationwide plan to combat crime in the Arab sector. That same week, the authorities began rounding up illegal weapons in several Arab settlements, but again, this was just a drop in the bucket. Three new murders occurred that same week.

Bennett announced his ambitious new plan at the ribbon-cutting ceremony Aug. 11 for the Galilee district headquarters of SAIF (Arabic for sword, and the Hebrew acronym for the Department to Fight Crime in the Arab Sector), located in Kiryat Ata. The department is headed by deputy commissioner Jamal Hakrush, the most senior-ranking Arab officer in the Israeli Police force.

In his remarks, Bennett promised that after years of neglect, which have allowed for crime in the Arab sector to skyrocket, his government “determined to act and fight tirelessly, persistently and consistently, with all its might against crime and violence in Arab society."

He continued, “The Arab sector now makes up 20% of Israel’s total population, but it accounts for 60% of all crimes. This is an impossible situation. It is incumbent upon us to address its social roots, but at the same time we must recognize that it also can be attributed to government neglect. That's why we are making the transition from talk to action. Today we have established the Department to Fight Crime in the Arab Sector, and I have approved a nationwide plan to rein in criminal activity in the various Arab communities.”

This budget-rich program is attempting to combine a soft-handed approach to the problem with a high-handed one. It involves the collecting of illegally owned weapons, and the capture of criminals quickly and efficiently, so that they can be tried. But at the same time it also involves more funding for education and cooperation with the local authorities. Public Security Minister Omer Bar-Lev said that its goal is “to break the crime families apart and to put an end to the protection racket.”

The chief of police, Commissioner Yaakov Shabtai, who was also in attendance, described crime in the Arab society as an existential threat, adding that the police knew about tens of thousands of illegal weapons in the possession of criminal elements in the Arab sector.

As brutal as the statistics concerning the murder rate in Arab society are, figures released by the Knesset’s Research Division are even more devastating. For example, a young Arab is 21 times more likely to be shot than a Jew of the same age, while Arabs ages 25 and up are 36 times more likely to be shot than Jews. Furthermore, a total of 10,891 people in Israel were injured in gun-related crimes between 2017 and 2018: of these, 84% were part of the Arab sector, another 12% were Jews and the remaining 2% were Arabs, who are not residents of Israel. Of the 13,450 cases of gun-related crimes in which the perpetrator is known to the authorities, 78% of the suspects were Israeli Arabs, while just 14% were Israeli Jews. The report also found that a large proportion of gun-related cases in the Arab society are closed due to lack of evidence.

There is no doubt that the new Bennett-Lapid government is taking a new approach to the problem, mainly by investing extensively in the welfare of the Arab society. Of the 53 billion shekels ($16.4 billion) promised to head of Raam Mansour Abbas in the coalition agreements, 2.5 billion ($775 million) are to be poured directly into “the war against crime.”

Another reason for optimism is the fact that for the first time ever, an Arab party (Raam) is a member of the coalition, meaning that the internal affairs of the Arab society are now part of the government’s agenda. This is a major change. In fact, Abbas shattered the paradigm of Arab parties until now, who focused intensely on the Palestinian-Israeli conflict. He was the first to shift priorities like this. Although he doesn’t deny the problems facing the Palestinians, he said openly that his first task is to raise the quality of life for Israel’s 2 million Arab citizens, who have suffered the results of insufficient budgets, crime and a lack of infrastructures in all areas since the founding of the state.

Abbas has been receiving lots of media attention, too, in his capacity as head of the parliamentary Committee to Rein in Crime in the Arab Society, as has the committee itself. The fact that he holds the keys to the continued survival of a very fragile new government will certainly help him bring his agenda to fruition, especially when it comes to striking at the roots of criminal activity in the Arab society. It is also important to note that the results are measurable. Within just a year, it will be possible to tell whether the change was beneficial or not.

Last year, Abbas proved that he is a very capable leader with exceptional political acumen. He will be the first to realize that if he fails at his task, the political repercussions will be severe. In other words, he has plenty of reasons to ensure that his efforts succeed.