Arab-Israelis are divided over the government’s decision to bring in the IDF and the Shin Bet to help police control rising crime and violence in Arab towns. 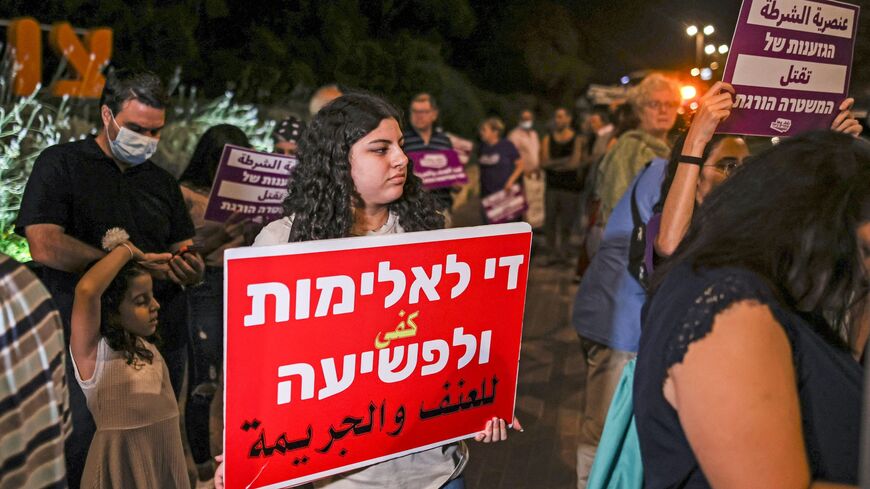 A demonstrator holds a sign reading "enough violence and crime" in Arabic and Hebrew during a protest by Arab-Israelis and activists against the government's insufficient action towards rising violence levels within the Arab community in the northern Israeli town of Kokhav Yair on Sept. 25. - AHMAD GHARABLI/AFP via Getty Images

Prime Minister Naftali Bennett convened the first meeting of the ministerial team for combating crime in Arab society on Oct. 3. This team, formed in response to an alarming rise in Arab-Israeli violence, adopted a working plan from Deputy Minister of Public Security Yoav Segalovitz, who will coordinate the inter-ministerial work for implementation.

Segalovitz's plan includes cooperation between the police, the Shin Bet, the IDF, the National Security Council, the Attorney General’s office, the tax authorities, and a whole slew of other official organizations and ministries. “Crime in the Arab society has reached a red line,” said Bennett at the start of the meeting. “What the Arab public must understand is that the security forces are not the enemy; they are the solution. As such, they [the Arab public] should not blame the government. They should work hand in hand with it.”

What was interesting about the meeting was not who attended but who didn’t. No Arab ministers or members of Knesset were present, even though they represent the bulk of the people suffering from the wave of violence.

According to the Abraham Initiatives [NGO working for Jewish-Arab coexistence], almost 100 Arab citizens have been murdered since the start of the year. Nevertheless, the decision to deploy the Shin Bet and IDF in Arab towns and villages shocked many Arab-Israelis, since those organizations are charged specifically with national security. They are not civilian/policing organizations charged with protecting individuals from crime.

Regional Cooperation Minister Issawi Freij supported the move, saying, “Let them send in the CIA, as far as I am concerned. What matters is security.” Similarly, Ra’am party chairman Mansour Abbas, who is also a member of the coalition, announced that he is not really opposed to Shin Bet involvement in the matter. “The government is the one supposed to provide personal and community security to the citizens of the country, Jews and Arabs. All the tools at the disposal of the government, all the organizations at its disposal, must be deployed,’’ he said, including Shin Bet, as long as it operates within its mandated authority.

In contrast, Joint List Chairman Ayman Odeh tweeted: “Sole responsibility for law enforcement in the civilian sector lies with the police, and not the army or espionage organizations.” Knesset Member Aida Touma Sliman announced, “It is incumbent upon the police to understand that the Arab society is not some enemy. It is incumbent upon the government to understand that without the rehabilitation of the police and without dealing with its hostile attitude toward Arabs, nothing will change.”

By law, the Shin Bet is responsible for ensuring the security of the state, its institutions, and its democratic government and protecting them from terrorism, sabotage, subversive activities, espionage, and the disclosure of state secrets. But not all Arab-Israelis believe the Shin Bet is impartial and respectful when it comes to them.

Shin Bet activity in Arab-Israeli towns could feed the perception that the police work on behalf of Jews, while the Shin Bet focuses on Arabs. Those who object to the move argue that only the police should deal with civilian matters. Many of them ask why the police can rein in crime and violence in the Jewish sector, but fails when it comes to the Arab society.

Also, Arab-Israelis fear that the recent decision will formally turn them into a “security threat” in the eyes of the state and the Jewish society. It brands the entire Arab population as an enemy, to be handled by official bodies like the IDF and the Shin Bet. Those who object argue that only the police should deal with civilian matters.

Photojournalist Fadi Amun, from the Arab town Yarka, told Al-Monitor that he opposes the involvement of the Shin Bet and the IDF. In 2013, he pointed out, 58 people were murdered in Arab society, and 73 people were murdered in the non-Arab sector, but the situation reversed the next year, because "in 2014 police defined battling organized crime in non-Arab towns as a priority. They managed battling organized crime without the involvement of any espionage organization whatsoever, and certainly not the IDF.”

In contrast, attorney Shakieb Ali, a human rights advocate and expert in constitutional and administrative law, voiced support for the move. “As far as the Arab society is concerned, the deployment of the Shin Bet in the Arab sphere is nothing new," he told Al-Monitor. "The Shin Bet was always present [in civil life], in order to protect the Jewish society. This time, it is supposed to be there to protect the Arab public. One can only hope that its involvement will not be exploited deleteriously, for some other purpose.”

The police, too, are sensitive to the issue. The head of the Division to Stop Crime in the Arab Sector, Deputy Commissioner Jamal Hakrush, reassured the Arab public that they will not see IDF troops or Shin Bet agents out in the open in Arab communities. “The police will maintain authority. We will handle the situation, but we need backup. We want the Shin Bet to help in all matters involved in the location of illegal arms.”