Arab legislators, community leaders and also the government are joining forces in promoting coronavirus vaccinations for the Arab-Israeli public. 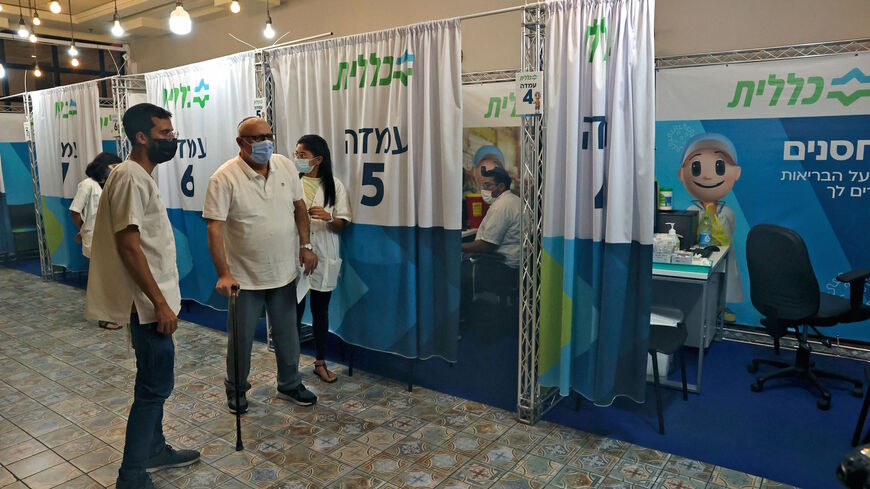 Israelis wait their turn to be inoculated with the Pfizer-BioNTech vaccine against the coronavirus, at a Clalit Health Services station set up inside Cinema City complex in Jerusalem, on Aug. 11, 2021. - HAZEM BADER/AFP via Getty Images

Prime Minister Naftali Bennett and Minister of Regional Cooperation Issawi Freij visited the Arab-Israeli town of Taibe Aug. 19. During the visit, Bennett called on the Arab public to "Go get vaccinated!" Bennett had a very down-to-earth message: “Vaccination saves lives. It’s as simple as that. There is nothing more sacred than human life, in both Jewish and Muslim tradition.”

A day earlier, Minister of Social Equality Meirav Cohen stopped at Doha Stadium in the Arab-Israeli town of Sakhnin, as part of a joint initiative with the Sakhnin municipality and the Bnei Sakhnin soccer club to promote the vaccination drive among Arab Israelis.

Visits such as this and others — including Cohen’s visit to Baqa al-Gharbiyye and Freij’s visit to the Bedouin town of Rahat — were the result of reports of low vaccination rates in the Arab sector including both booster shots among senior citizens and first and second doses among children ages 12 to 17. According to the Ministry of Health, as of the first week of August, an estimated 547,000 Arab Israelis have yet to be vaccinated.

Like his predecessor Benjamin Netanyahu, Bennett has gone all out on massive vaccination drive targeting all of Israel, including the booster dose, which became available last week for everyone ages 40 and older.

Bennett believes that vaccinations are the best way to prevent Israel from going into a fourth lockdown. He said at a press conference last week, “If we keep doing lockdowns, we won’t have money for Iron Dome missiles or APCs. Another lockdown will destroy this country’s future.”

He continued, “Vaccinations work remarkably well. They’re safe, too, but most of all, they work. Lockdowns are a last line of defense, to be used only after all the other options have been exhausted.”

Yet while the prime minister, the minister of health and other officials in the Health Ministry have spoken frequently over the last few weeks about the importance of vaccinations, over a million Israelis have yet to be vaccinated. Some of them cite ideological reasons, but there are also quite a few Arab citizens among the group of the unvaccinated who are not necessarily influenced by the same reasons.

An intense information campaign about the importance and effectiveness of the vaccine is specifically targeting Arab villages, where the prime minister and members of his Cabinet are visiting frequently.

On Aug. 22, Aiman Saif, who is in charge of coronavirus preparedness in the Arab sector at the Ministry of Health, reported that over the past weekend (Aug. 20-21) there was “an overwhelming response to calls to be vaccinated. 14,000 people got their shot, including 10,000 who received the third dose of the vaccine.” In a conversation with Al-Monitor, Saif said, “The improvement is remarkable among people receiving the third dose. We’ve already reached 73,000 people. As for the first and second doses, we still have to reach 390,000 people, a large part of whom are children between the ages of 12 and 18.”

Meanwhile, the Arab Raam Party, a member of the governing coalition, has launched its own campaign to get people vaccinated, under the slogan, “We trust in God, get vaccinated, and follow instructions.” The party called on imams and the heads of local councils to call on people to get vaccinated.

Some contend that the real culprit in the vaccination gap between the Jewish and Arab sectors is unequal medical services. In a conversation with Al-Monitor, Director of the Mossawa Center for Civic Equality Jafar Farah addressed the issue. He said, “The differences in the quality of health services in general result in higher rates of disease and reduces the average life expectancy of Arab citizens. What is happening with the coronavirus is a result of these differences. The health system must improve the availability and quality of services in the Arab society. As of now, there are just three hospitals in the Arab towns and villages, all three of them private and all three of them in Nazareth. We brought up this very issue with the new minister of health but have yet to hear back from him.”