Leaders of popular protests and other social movements gathered for a national conference sponsored by Iraqi Prime Minister Mustafa al-Kadhimi in Baghdad to discuss Iraq's outstanding issues and the early elections scheduled for October. 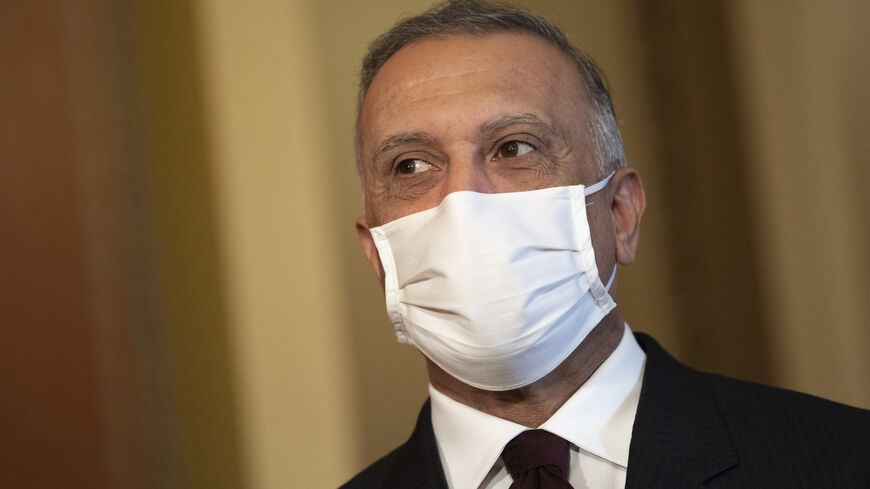 Iraqi Prime Minister Mustafa al-Kadhimi looks on as Speaker of the House Nancy Pelosi (D-CA) speaks briefly to the press outside of her office at the US Capitol on July 28, 2021 in Washington, DC. - Drew Angerer/Getty Images

BAGHDAD — Many Iraqi leaders met Wednesday and Thursday to discuss important national issues at the National Dialogue Conference in Baghdad ahead of an Aug. 28 regional conference involving neighboring countries and France.

Iraqi Prime Minister Mustafa al-Kadhimi sponsored the National Dialogue Conference, with the participation of political forces, popular organizations, clan leaders, leaders of the October popular protests and representatives of some armed factions, to discuss various domestic issues, the foremost of which is creating the appropriate atmosphere for the Oct. 10 elections.

Kadhimi urged all national forces, popular forces, groups who boycotted the previous elections and spiritual leaders to urge people to participate in the upcoming October elections.

He told the conference, “Your ideas and proposals are among my personal beliefs, and I will make every effort to ensure that the recommendations of this conference are followed in the government's performance, and I urge all of you to cooperate together as people of one nation to rid our country of conflict, difference, deterioration, doubts and mistrust and to ensure prosperity and development, strength and mutual trust.”

He said the goals set for the conference would only be achieved in two ways. “The first is to identify the errors clearly and courageously, and the second is to work on reforms no matter how difficult and painful they might be, and to insist together that our people deserve a future and stability and that they deserve to overcome this chaos that some enemies of the people want to keep us in.”

Kadhimi called for the conference during Pope Francis' visit to Baghdad in March in an attempt to capitalize on the positive atmosphere created by the trip and to invite all Iraqi parties to engage in dialogue and exchange opinions about the Iraqi concerns and issues that were factors behind the popular protests in 2019.

The National Dialogue Conference is being held just days ahead of the Baghdad Conference for Cooperation and Partnership, which includes leaders of Iraq's neighbors and other countries in the region as well as French President Emmanuel Macron.

A well-informed source in the Iraqi government told Al-Monitor, “The date of the National Dialogue Conference was scheduled for the beginning or middle of August, but Kadhimi decided to hold it before the Iraqi neighboring countries' conference was held in Baghdad to show regional leaders that the Iraqi people look forward to good relations with all countries of the world and reject international conflicts on their lands.”

The source added, “It also aims to show world leaders that Baghdad seeks stability in order to attract economic partnerships and investment trade cooperation with any country that can help develop the Iraqi economy.”

The National Dialogue Conference is in part a result of an atmosphere of anticipation about the elections in October and the boycott of the elections by the Sadrist movement led by Shiite cleric Muqtada al-Sadr and by some blocs that represent the popular protest movement. Among the issues discussed at the conference were the reasons why the groups are boycotting the elections, especially since some leaked information indicated that Sadr had set two conditions to end the boycott. The first is for the elections to be postponed and the second is for Iraq's supreme Shiite authority, Ali al-Sistani, to intervene to limit the spread of weapons that affect the integrity of the elections.

But Kadhimi told the National Dialogue Conference that the elections would be held on schedule and that his government had provided everything necessary for holding them, including material and logistical support for the Electoral Commission.

Kadhimi called on the political parties participating in the conference to form a delegation for dialogue with the boycotting parties in order to persuade them to reverse their decision and actively participate in the elections.

Some of the parties boycotting the elections said during their participation in the National Dialogue Conference that they would revisit the elections matter, taking into account discussions during the conference, and would announce their final position in the coming days.

The conference also included an agreement to hold permanent committees for dialogue and follow-up on the results of the conference in the hope that they will continue their work after the formation of the next government and be the basis for building a new social contract that prevents chaos from reemerging or the political process from collapsing, which seemed imminent in 2019 when the popular protests reached their climax.

These efforts are aimed at helping Kadhimi’s project succeed in finding general national consensus among the various segments of the Iraqi people and in transforming Iraq from a land of regional and international conflict into a bridge for communication and cooperation with the larger world.