Washington unveiled a program Monday for Afghan refugees to seek asylum in the United States via third countries, including Turkey, raising criticism from Ankara officials who fear the move could fuel a new migration crisis. 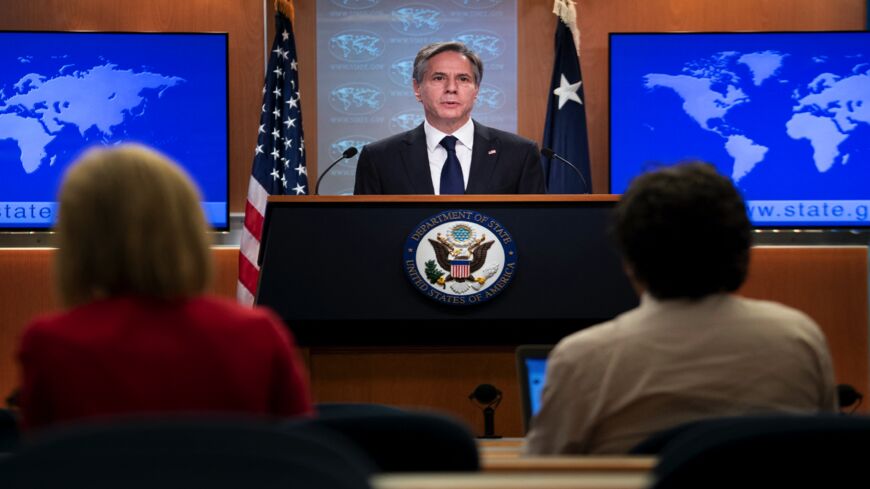 US Secretary of State Antony Blinken speaks about refugee programs for Afghans who aided the United States, during a briefing at the State Department on Aug. 2, 2021, in Washington, DC. - BRENDAN SMIALOWSKI/POOL/AFP via Getty Images

ISTANBUL — Ankara officials are condemning a US program to resettle Afghan refugees via third countries, including Turkey, saying the move could spark a new migration crisis in the region and overburden the nation, which currently hosts more than 4 million displaced people.

On Monday, US Secretary of State Antony Blinken unveiled a relocation plan for thousands of Afghans who may be targeted by the Taliban for their affiliation with US organizations, as American troops complete their withdrawal from Afghanistan following 20 years of war.

The program, intended for Afghans who worked for US contractors, nongovernmental organizations or media organizations and who are not eligible for US special immigrant visas, requires applicants to leave Afghanistan and wait in a third country where their cases will be processed in 12 to 14 months. The countries most likely to serve as third nations for applicants are Pakistan and Turkey via Iran, which Afghans must transit at their own expense.

-Turkish Foreign Ministry spokesperson Tanju Bilgic denounced the move as an “irresponsible decision” in a statement Tuesday, claiming Ankara officials were not consulted prior to the plan’s announcement.

“This announcement will cause a major refugee crisis in our region and increase the misery of Afghans on the migration routes,” Bilgic said in the statement. “Turkey does not have the capacity to bear another refugee crisis for another country.”

In an interview with Bloomberg Wednesday, the Turkish presidency’s communications director, Fahrettin Altun, also condemned the measure, saying “Turkey does not, and will not, serve as any country’s waiting room.”

The news comes as anti-migrant rhetoric is rising once more in Turkey, spurred by some political leaders who channel growing public discontent over the long-term presence of more than 3.7 Syrian refugees, which they claim are straining state resources and take low-skilled jobs away from Turkish citizens.

In recent weeks, between 500 to 2,000 Afghans have reportedly been entering Turkey’s eastern border with Iran, raising pressure on the Turkish government to prevent a new migration wave from Afghanistan, where the Taliban has been claiming more territory amid the US withdrawal. According to data from Turkey’s Interior Ministry, more than 30,500 Afghan nationals have entered Turkey so far this year. In response to such trends, Interior Minister Suleyman Soylu outlined plans Wednesday to increase border security with new walls and surveillance drones to monitor movements along Turkey’s border with Iran.

Mahmut Kacan, a lawyer based in Van who formerly worked as an asylum officer for the UN’s refugee agency, the UNHCR, said it was too early to assess the impact of the US relocation program but that local news reports predict 10,000-20,000 Afghans could be eligible for the plan and may leave Afghanistan in the coming months. US officials have yet to offer a number on how many Afghans might be eligible for the program.

Among the potential newcomers would include former interpreters and employees for US organizations and their families. Kacan said he has yet to see such groups arrive in the Van province, which borders Iran, but Afghans currently arriving in the area have told him Iranian security forces are allowing migrants to transit through the country en route to Turkey.

“In Van, we haven’t observed people arriving in Turkey to seek asylum [in the United States], but in September, maybe October, we might expect those groups to come,” Kacan told Al-Monitor.

Kacan said the US program was “not logical” as it endangered asylum-seekers who will have to pay smugglers to reach Turkey and could face a number of human rights violations along the way. He also said it was unlikely the Foreign Ministry was not informed about the plan prior to its announcement Monday.

Kilicdaroglu, who has increasingly taken a harder stance against migration in recent weeks, also vowed to cancel agreements made between Erdogan and the US government if his party assumes the presidency in elections currently scheduled for 2023.

“As a member of the alliance that will govern Turkey in the future, we do not accept those deals that you made with Erdogan,” Kilicdaroglu said. “Whatever you have said or relayed to Erdogan [is] binding only for him, not for the Republic of Turkey.”

Metin Corabatir, president of the Ankara-based Research Center on Asylum and Migration, said the relocation plan comes at a time when Turkish society is highly polarized over the issue of hosting refugees.

“Historically, Turkey helped many refugees who have been evacuated by United States from Iraq via Turkey,” Corabatir told Al-Monitor.

“It is not a good time to make such a statement before due consultation. It would further put the government in a difficult situation in the light of growing dislike of refugees because of the liberal refugee policies and would harm the interests of refugees already in Turkey,” he added.

According to application forms for the US resettlement program available at the wrapsnet.org website, no relocation procedures will be conducted in Afghanistan or Iran, and pre-approved applicants “will need to arrange and pay for their own travel to a third country.”

Once in a third country, applicants must inform the US State Department, which will begin processing their cases over a period of 12 to 14 months in which individuals must cover their living expenses. The program documents also state the United States will be “unable to provide protection or support to individuals while they await a decision on their refugee case.”

The developments come as Washington and Ankara remain in discussions over the potential role of Turkish forces in guarding and operating Kabul’s international airport following the withdrawal of US-led forces.