A string of deadly incidents involving migrants has shaken Turkey’s eastern province of Van, which borders Iran and lies on a major route of human trafficking to Europe. 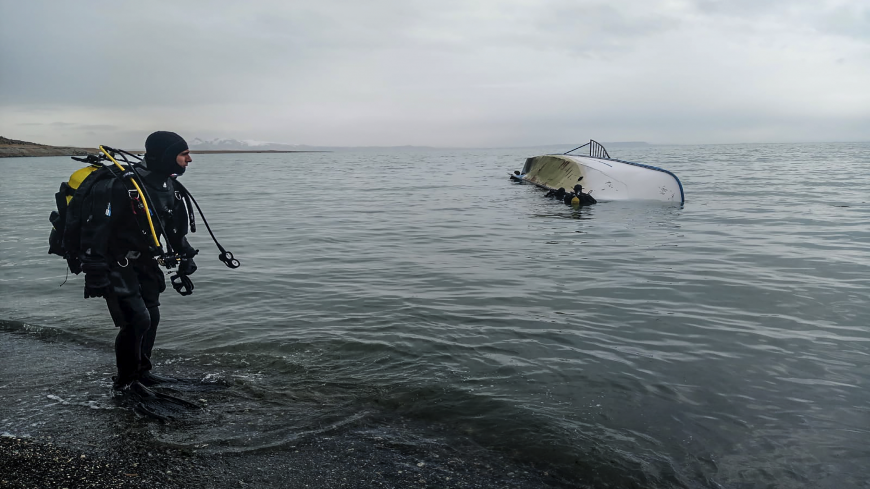 Harrowing photos seen by Al-Monitor show decomposing bodies lying on mountain slopes, almost all of them naked or with only some thin clothes on. Some lie in the fetal position like an unborn baby in a mother’s womb. Worse, many are dismembered. These are the remains of nameless refugees who froze to death in the mountains of Turkey’s eastern province of Van after crossing clandestinely from neighboring Iran, their fates unbeknownst to their loved ones and, until recently, to Turkish authorities themselves.

Local villagers incidentally discovered the bodies after snow in the mountains began to melt in spring, revealing the fate of the most unfortunate among tens of thousands of migrants and asylum seekers who try to cross from Iran to Turkey each year in the hope of reaching Europe. The photos were taken by lawyer Mahmut Kacan, executive board member of the Van Bar Association in charge of migration and asylum issues, whom the villagers alerted about the bodies.

According to Kacan, who shared the photos with Al-Monitor, refugees are often abandoned by human traffickers in the middle of nowhere, losing their way and perishing alone in snow-covered mountains. Kacan finds it hard to believe but cites a local prosecutor as saying that jewelry, wallets and even clothes and shoes have been stolen from the dead. The mutilation of the bodies, meanwhile, is the work of wild animals.

Kacan said he was aware of at least 29 bodies recovered incidentally in the area in the past three years. “It’s such a gruesome sight. I could hardly eat anything for several days,” he said.

The state of the bodies makes identification almost impossible. No one has claimed remains thus far. Kacan has been contacted only by an Afghan family, which eventually failed to make it to Turkey. “The bodies were so unrecognizable that the family was required to come to Van for DNA tests and identification. However, they were denied visas by Turkey. So there was only one attempt [to claim remains], and it failed because of red tape,” he said.

In line with legal regulations, the bodies are kept in morgues for 15 days and then buried in a potter’s field in Van. In some instances, Kacan said, the remains have been no more than a bag of bones. Amid an increase in illegal crossings in recent years, the potter’s field in Van has become the largest in Turkey. More than 200 nameless refugees are buried in the cemetery, which continuously expands. Last month, the municipality bought new land to enlarge the site.

The burials are not limited to those who freeze to death in the mountains.

In late June, the province became the scene of a fresh tragedy when a boat overpacked with dozens of migrants sunk in Lake Van, the largest in eastern Turkey. As of July 13, divers had recovered 29 bodies as the search in the lake continued, with the wreck lying at a depth of more than 100 meters (328 feet).

Local journalist Rusen Takva was the first to break the news of the sunken boat, which embarked on its ill-fated journey on the night of June 27. Takva told Al-Monitor that locals and authorities became aware of the incident after co-skipper Medeni Akbas, the only survivor from the boat, managed to swim to the shore and reach his village.

Speaking during a visit to Van July 1, Interior Minister Suleyman Soylu said that 11 people suspected of involvement in the incident, including Akbas, had been detained. Based on interviews with Akbas and local villagers, the authorities estimate that up to 60 people were on board, he said.

According to Takva, however, the number of passengers was probably higher. The journalist claimed that authorities kept Akbas’ testimony from the press and that he got information that 60 migrants had been locked in a secret compound in the boat, apart from others scattered in other parts of the vessel. Takva has watched underwater footage taken by the divers. “There are bodies stuck between the rocks,” he said.

The actual death toll is expected to become clear once the wreck is pulled from the lake.

Human traffickers use Lake Van to take migrants from the city of Van to Tatvan, on the opposite shore, in a bid to circumvent security controls on the 135-kilometer (84-mile) land route between the two cities, Takva explained.

Seven migrants drowned in a similar disaster in Lake Van in December 2019, while a boat that capsized in October 2019 had all its clandestine passengers rescued. Others have died in road accidents while traveling in jam-packed vehicles.

Turkey is a major route for migrants trying to reach Europe, many of them fleeing wars or persecution at home. Those who try to sneak in from Turkey’s eastern borders are mainly from Afghanistan, Pakistan, Bangladesh and Iran. Kacan and Takva said they were coming across migrants from African countries such as Nigeria for the first time. The interior minister also said that African migrants were intercepted in Van this year.

Human trafficking is becoming an industry in Van, Kacan said, adding that some traffickers were so audacious that they advertised their services on social media.

Many in Van sympathize with the plight of the migrants and expect the authorities to step up measures against the traffickers. After the latest boat tragedy, a group of women organized a commemoration at Lake Van, throwing flowers into the water to honor the dead.

“Women and children died in that boat. We wanted to give those refugees, who have nobody to seek after them, a funeral ceremony in absentia,” said Deniz Oztekin, a senior member of the pro-Kurdish Peoples’ Democracy Party, who organized the event. “Those people, who set off with hopes for a better life, should not be abandoned to death, and human traffickers should not be turned a blind eye,” she added.

According to Soylu, at least 21,000 migrants have sought to reach Van this year despite the coronavirus pandemic. “About 16,000 were stopped at the border and not allowed to cross. The remaining 4,500 were caught after crossing the border,” he said July 1.

Official statistics show a marked increase in the number of migrants caught over the past three years in Turkey, which is already home to more than 3.5 million Syrian refugees. Security forces detained more than 454,500 migrants last year, up from 268,000 in 2018 and about 176,000 in 2017.