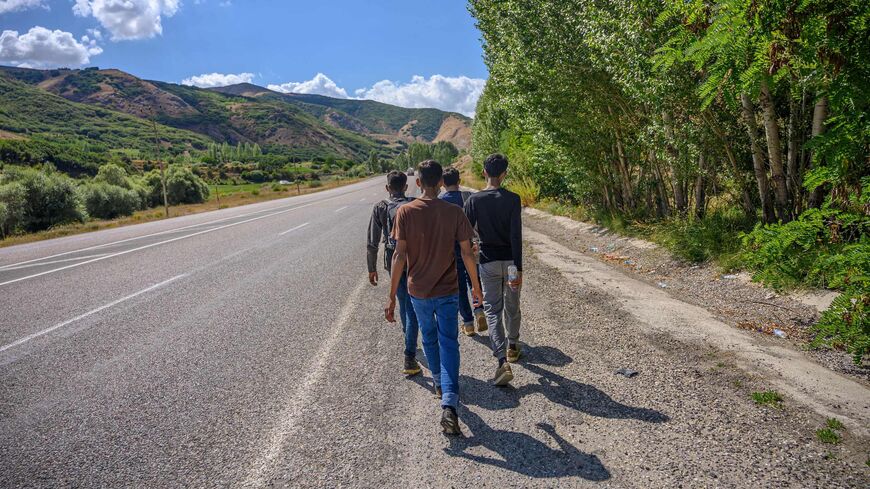 Migrants walk along the shoulder of a highway as they make their way from the Iranian border the city of Tatvan in the eastern Lake Van region of Turkey on Aug. 24, 2020. - BULENT KILIC/AFP via Getty Images

For years, Afghans, Pakistanis and asylum seekers from various other nations have made the irregular border crossing by foot in search of security and better work opportunities, usually making headlines only when hit by tragedy such as boat accidents in Lake Van or traffic incidents like one this Sunday that killed at least 12 migrants.

Local news reports are now linking an alleged spike in border crossings to the ongoing US troop withdrawal from Afghanistan and territorial gains by the Taliban in the country, prompting rumors of a looming migration wave to Turkey.

“It is too early to talk about a mass influx, but there is an increase in the number of arrivals and there are unconfirmed news stories about an accumulation of people on the Iranian side” seeking to cross into Turkey, Metin Corabatir, president of the Ankara-based Research Center on Asylum and Migration, told Al-Monitor. He added, “We have to observe what will happen in Afghanistan to see what comes next.”

“We would like to reiterate that our fight against irregular migration continues without interruption,” Catakli said in the statement, adding that 62,687 irregular migrants had been detained on Turkey’s eastern border so far this year.

In response, Rusen Takva, a journalist documenting migration flows along Turkey’s eastern border, posted videos Tuesday showing asylum seekers entering the country and stated that at least 1,500 people were making the crossing each day and that their numbers were increasing.

Turkey currently hosts about 4 million refugees, including about 3.7 million Syrians and an estimated 200,000 asylum seekers of Afghan origin. As US President Joe Biden calls for American troops to complete their withdrawal from Afghanistan by Aug. 31, reports indicate a growing number of Afghan nationals may seek refuge outside the country, with Turkey as a potential destination or transit country to Europe for some displaced individuals.

According to the UN High Commissioner for Refugees, about 270,000 Afghans have been displaced since January 2021, primarily due to insecurity and violence, raising the total number displaced Afghans to 3.5 million. The developments come as Taliban officials claimed Friday they had taken control of 85% of the territory in Afghanistan.

“The UNHCR remains deeply concerned about the increase in violence in Afghanistan,” Selin Unal, a spokesperson for the UNHCR in Turkey, told Al-Monitor. “We are watching the developments closely and continue to assist displaced Afghans affected by the violence.”

Unal said people seeking international protection could file applications with Turkey’s provincial directorates of migration management after entering the country, where they can qualify for additional assistance while their claims are reviewed. She added UNHCR data has yet to reflect media reports alleging increased border crossings to Turkey.

Underlining the lack of credible sources and monitoring systems to confirm recent migration reports, Corabatir noted the profile of new Afghan arrivals in Turkey has changed in comparison to previous years.

The new arrivals “are educated and worked mostly in government bureaucracies and they fear if the government collapses, the Taliban would take revenge on them,” Corabatir told Al-Monitor. He added that some Afghan nationals had paid smugglers between $2,000-$4,000 to secure Turkish entry visas only to find they had been scammed, and then decided to enter Turkey by foot across its mountainous eastern border.

The developments come as officials in Washington and Ankara continue to discuss Turkey’s potential role in running and guarding Kabul’s international airport following the US withdrawal. Taliban officials called such plans “reprehensible” Tuesday and warned Turkish officials of possible “consequences” if Ankara maintains a troop presence in the country.