Growing popular resentment of refugees and migrants is on course to become the second hot-button election topic in Turkey after the economic crisis, but the government is not in a position to force the return of Syrians, the main component of the problem. 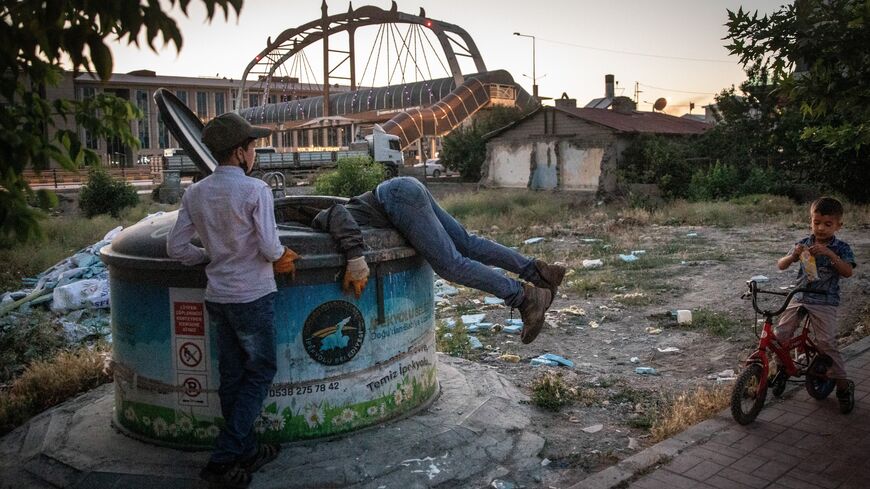 Hajigul from Afghanistan and his son Ferit (L) check a dumpster for sellable items on June 22, 2021, in Van, Turkey. Hajigul fled Afghanistan in 2017 with his wife and six children. After arriving in Turkey, Hajigul lodged an asylum application to settle in Europe and has been waiting for processing ever since. - Chris McGrath/Getty Images

The danger of xenophobia is rising in Turkey as controversy grows over millions of refugees and irregular migrants in the country, ahead of elections next year.

The issue goes beyond the Syrian refugees that Turkey has hosted since the Syrian civil war erupted in 2011. Popular resentment has been fueled by the growing number of illegal migrants and has come to affect even Middle Easterners and Asians arriving as tourists. As facts and figures are being jumbled, popular anger at severe economic hardships is being dangerously channeled into a general animosity toward foreigners.

Turkey’s migration agency reports a complex makeup of 5.5 million foreigners in the country, with Syrian refugees and foreigners with residence permits representing the largest groups.

The number of Syrians under temporary protection – the officialese for the refugees – stands at some 3.7 million. Turkey has been the world’s No. 1 host of refugees since 2015, and officials say the number of refugees has remained unchanged since 2017.

The second category is comprised of 1.4 million foreigners with residence permits, including students, business people and property owners. Nationals of Iraq, Syria, the Turkic republics in Central Asia, Iran and Afghanistan make the largest groups in this category, according to last year’s data.

Illegal or irregular migrants, who sneak into the country clandestinely without passports or visas, represent a third category in which the figures are ambiguous. The authorities release figures only about those who are caught, and they are mostly Afghans, Pakistanis and Syrians. The total of illegal entries remains unknown.

The fourth category is international asylum seekers, who number roughly 350,000.

Finally, there are the foreigners who arrive legally as tourists for a period of up to three months, but some of them are actually job seekers who join the unregistered labor force. Three fourths of the 5 million foreigners who entered Turkey in the first three months of the year were nationals of Middle Eastern and Western Asian countries in Turkey’s vicinity.

A citizenship-for-property scheme, which allows foreign buyers of real estate worth at least $400,000 to receive Turkish citizenship, has also stoked popular resentment.

The newly founded Victory Party, led by well-known nationalist politician Umit Ozdag, has made the issue of foreigners its main political platform, calling it an “invasion.” Syrian refugees and irregular migrants “have brought the foreign population in Turkey to 8 million” and the problem is growing into “an issue of national survival,” it says.

At a time when inflation in Turkey has more than tripled in a matter of months, such rhetoric resonates easily with large segments of Turkish society who see the foreigners as competitors in their struggle for jobs or feel disturbed by their ways and lifestyle.

And with elections looming in June 2023 at the latest, both the government and opposition parties have started to make pledges to send the refugees back. Though the Syrians are at the center of the controversy, the rising popular resentment is directed at all categories of foreigners from Middle Eastern and Western Asian countries.

In response to the criticism, the government says it has acted to prevent illegal crossings into Turkey, including an 837-kilometer (520-mile) wall covering 91% of the border with Syria, coupled with border security roads, and similar measures at the Iranian and Iraqi borders.

Speaking at a press conference May 6, Deputy Interior Minister Ismail Catakli slammed “provocations” on social media aimed at fanning hostility against migrants, including videos of Arab tourists misrepresented as refugees. Recalling that 4.5 million Middle Eastern and North African tourists visited Turkey last year, he said, “Calling every dark-skinned person in the street an illegal migrant and creating certain perceptions in this context is nothing less than causing panic. Some are targeting the tourism sector in Turkey, especially the tourists from Islamic countries, trying to portray them all as irregular migrants.”

President Recep Tayyip Erdogan has already seen his poll numbers sag due to his economic failures, and would hate to see further losses due to his refugee and migration policies. But the temporary protection status that Ankara accorded to the Syrian refugees in 2014 entails the right to non-repatriation, meaning that the Syrians can be sent back only on a voluntary basis.

Last week, Erdogan said that about half a million Syrians had returned voluntarily to safe regions in Syria and announced a project to encourage the return of another 1 million, including the construction of homes, hospitals, schools and industrial and agricultural facilities in 13 Turkish-controlled areas in northern Syria.

The issue of refugees and migrants is on course to become the second hot-button topic in Turkey after the economic crisis in the lead-up to the elections. Both the government and the opposition will have to reckon with the voter sentiment on the issue. The government, however, is not in a position to force the return of the Syrians, who are main component of the problem. It will likely try a diversion until the elections, but how convincing such an effort will be is anyone’s guess.