The founder of a small right-wing party challenges the interior minister in row over repatriations — but is it an attempt to gain support as Turks grow weary of refugees? 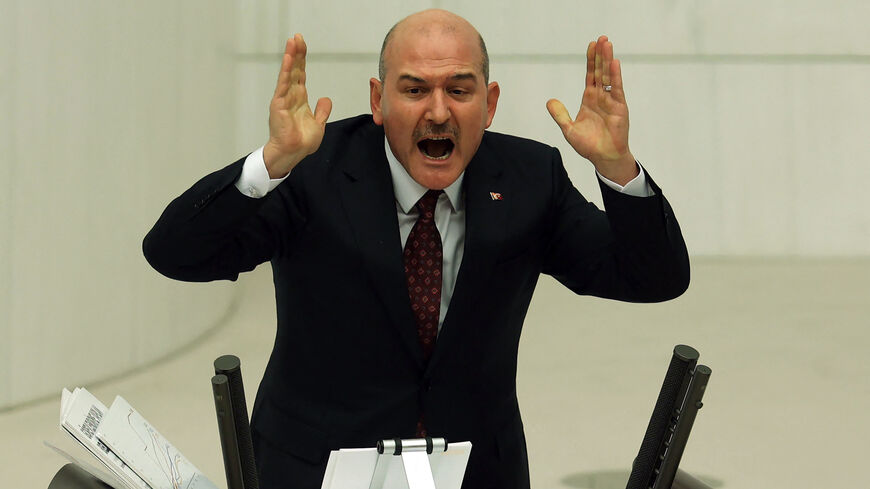 Turkish Interior Minister Suleyman Soylu gestures as he speaks on the 2022 budget of the Ministry of Interior at the Turkish Grand National Assembly, Ankara, Turkey, Dec. 8, 2021. - Adem Altan/AFP via Getty Images

ISTANBUL — Challenging someone to a fight over an insult is a distant memory from the school playground for most people. But in recent days two senior Turkish politicians have been engaging in the kind of taunting many would consider unbecoming of middle-aged men — and the Turkish government's refugee policy was at the center of their dispute.

The row between Interior Minister Suleyman Soylu and Umit Ozdag, president of the nationalist Zafer party, was sparked May 5 when the minister called Ozdag “less than an animal” during a TV interview.

A short while later Ozdag issued his challenge to Soylu in a video posted on social media. With a group of supporters standing in the background, he declared he would be “alone and unarmed” in front of the Interior Ministry at 11 a.m. the following day.

“If you have one ounce of courage, wait for me at the ministry gate without hiding behind the honorable Turkish police,” he said.

However, as he strode from his office in parliament for his pre-noon showdown with the 52-year-old Soylu on Friday, Ozdag, 61, was blocked by police officers.

At the same time, in perhaps a further poke at Ozdag, an animal welfare vehicle was parked in front of the ministry building in Ankara.

Most onlookers expressed a mix or bemusement and amusement at the spat, such as Iyi party lawmaker Umit Dikbayir who tweeted that it was “theater with a bad script.” Ozdag was kicked out of the Iyi party before going on to set up the Zafer (Victory) party last year.

However, the spectacle soon drew in more senior figures. Devlet Bahceli, whose Nationalist Movement Party (MHP) is in partnership with the government, described Ozdag’s actions as a “filthy ploy, a vulgar ploy, an arrogant scheme and a futile effort.”

Ozdag was a member of the MHP until he was dismissed after he challenged Bahceli for the leadership in 2016.

Vice president Fuat Oktay visited the Interior Ministry later Friday and posted photographs of his meeting with Soylu while Omer Celik, spokesperson for the ruling Justice and Development Party (AKP), warned against “clear provocations” toward Soylu and the ministry.

Mafia boss Alaattin Cakici, who has close ties to Bahceli and the MHP, also criticized Ozdag.

The unseemly dispute is rooted in the renewed debate in Turkey over its policy toward migrants and asylum-seekers.

Turkey hosts some 3.8 million Syrians and hundreds of thousands of Afghans, Iraqis and other migrants from further afield. The issue is high on voters’ agenda, with opinion polls showing significant support for sending Syrians back to their country.

Last week, President Recep Tayyip Erdogan, who had previously resisted opposition calls to repatriate Syrians, announced plans to voluntarily return 1 million to their war-torn country. He later stressed that he would not forcibly expel Syrians “into the hands of murderers.”

Fuel was added to the fire by a short film, funded by Ozdag, that portrayed a future Turkey dominated by Syrians.

Berk Esen, assistant professor of political science at Istanbul’s Sabanci University and IPC-Mercator fellow at the German Institute for International and Security Affairs, said the “bizarre” episode between Soylu and Ozdag could reflect the latter’s bid to carve out support for his party, which received 2.2% support in a recent poll.

Since founding the party, Ozdag has produced a number of provocative social media videos portraying migrants as taking advantage of Turkey’s hospitality.

This could be part of an effort to establish Zafer as a far-right, anti-migrant party in the mould of European movements such as Marine Le Pen’s National Rally.

“Now that Ozdag is making such waves in public opinion, it makes sense because we have millions of Syrian migrants and a growing number of Afghan migrants and others coming from various other countries,” said Esen.

He added, “From a political science perspective, it is perfectly normal to have this far-right populist party emerge, to politicize migrants, come up with these racist theories that Turks will become a minority in 30 years’ time because of the high birth rate, the same discourse Le Pen uses in France.”

Such a strategy could already be paying off, according to Can Selcuki, director of polling firm Turkey Report. Commenting on unpublished data for May, Selcuki said the Zafer party had made a surprising showing.

“The pace of the increase is surprising but the question is whether it is sustainable between now and the election,” he said. “I think it will be difficult to maintain.”

Turkey’s parliamentary and presidential elections are due by June next year but could be called earlier by Erdogan.

Esen questioned why Ozdag, a former lecturer at Ankara’s Gazi University, which counts many members of the police and Interior Ministry among its alumni, was targeting Soylu rather than Erdogan.

“Is it because it is an authoritarian country and if he challenges Erdogan, Erdogan can get rid of him? Or are we seeing some kind of rift within the security apparatus so that Soylu’s critics within the police are giving Ozdag some kind of support?”