As anti-refugee sentiment rises higher in Turkey during the Eid, Erdogan pledges a build-and-return project enabling more than a million Syrians to return “voluntarily” to northern Syria. 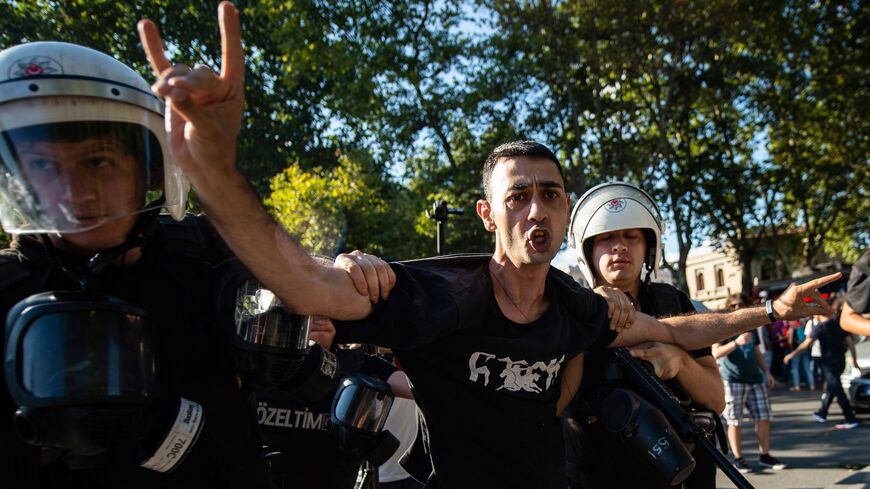 Turkish police try to arrest an ultranationalist protester who is protesting against demonstrators gathered to support the refugees, in Istanbul, on July 27, 2019. - YASIN AKGUL/AFP via Getty Images

The date on the screen shows May 3, 2043, as a Syrian party wins the elections in Turkey and its chair declares Arabic the official language of Turkey.

In the next scene, the camera pans to a young man who laments his job as a cleaner in a hospital run by a Syrian man, where he is not allowed to speak Turkish. Then he asks his parents, “How could you let that happen even though you had been warned over and over that the Syrians were carrying out a silent invasion?”

The nine-minute film, “Silent Invasion,” faintly resembles French author Michel Houllebecq’s controversial satire, “Submission,” where a Muslim party wins elections in France and completely alters life in the secular republic. It also pushes the fear buttons of Turkey’s anti-migration bloc: It portrays a future where Turks are chased on the streets by Syrian gangs and deprived of white-collar jobs, ethnic Syrian politicians proudly declare that the Turkish territory is historically theirs and the Turkish language is on the verge of extinction.

In the second part of the short film, the camera pans to director Hande Karacasu, who explains that the “uncontrolled but strategic” migration wave that started in 2011 with the Syrian war has now made Turkey home to “8 million Syrians,” more than twice the 4 million figure given by Turkish and international organizations.

The young documentary-maker explains that — given that 78% of Syrians in Turkey do not want to go home and the fertility rate of Syrian women is 5.3 — there would be 15 million Turks of Syrian origin in Turkey, implying that her scenario of a Syrian party in power is not only possible but probable.

“The silent invasion is not so silent. It is right here with the Arab realtors who refuse to serve Turkish clients, Afghan harassers and Syrians who have already realized their demographic takeover,” Karacasu said.

Within 24 hours of its release on May 3, the video had nearly 2 million views and was upvoted by hundreds of thousands. A few hours after the release, Karacasu was detained by the police for “manipulating the information on refugees and irregular migrants.” It was unclear whether the public prosecutor would bring further charges on the cineaste for inciting hatred when this article went to print. However, an avid online campaign supporting her had already started with the hashtag #handekaracasuisnotalone, with many calling on the police instead to arrest the irregular migrants — the Syrian, Afghan or Pakistani “rapists” who harassed Turkish women on the streets, raised flags in public places or mocked Turks.

“They call me a racist. I am just a patriot who believes in Ataturk’s Turkey,” Karacasu tweeted after her release as she thanked the public, politicians and journalists who supported her and her film.

Among her supporters, one politician particularly stood out. “I am the one who commissioned and financed the short film,” tweeted Umit Ozdag, the chairman of the newish Victory Party, which has placed anti-refugee rhetoric at the center of its political program. “I have approved the scenario. Ms. Karacasu’s film shows the results of uncontrolled migration. There is no hate [speech].” Indeed, the figures given in the film and the rhetoric that Syrians will be establishing their party on in the foreseeable future ring close to Ozdag’s past statements. The film was diffused on social media by many of the Victory Party's local branches.

Ozdag, a professor of political science and a determined Eurasianist, has become one of the central actors in Turkey’s debate on refugee policy and a speaker for rising xenophobia, although his party’s votes are around 0.5%, according to leading pollster MetroPOLL. The politician claims that his vote is approximately 3.7%  and has accused MetroPOLL of manipulating the numbers because he refused to pay the pollster off.

An agile orator with a solid social media presence, Ozdag has been steadily fanning the resentment of Turks with his one-liners and slogans that are reminiscent of the French alt-right. “We should not be ashamed to be Turks or for protecting our lifestyle,” he says. In May, he promised to send millions of Afghan, Pakistani and Syrian refugees back home. Asked by government members and the opposition on just how he would do that, he replied with a cartoon: “By bus.”

Last month, several lawyers filed against the closure of the Victory Party, accusing it of hate speech toward refugees. Today, May 4, when Ismail Catakli, the deputy interior minister, threatened to sue him for xenophobia and attempts to mislead the public through false figures on migration, Ozdag remained unmoved. “Come and sue me. Then, while at it, sue Feridun Sinirlioglu, Turkey’s permanent representative to the UN, for giving [even higher] figures he gave on migration to the UN Council,” he hit back.

“Ozdag’s rhetoric targets the opposition rather than the government, neither of which has come up with a satisfactory policy on what to do with the displaced people in Turkey,” Ayse Cavdar, an anthropologist currently based in Berlin, told Al-Monitor, warning that it may be too simplistic to write off Ozdag, who was playing the “angry voter” card, in the next elections. “Everything is so changeable in Turkey that we cannot quite dismiss a last-minute increase in his votes,” she warned.

Cavdar warned that public resentment toward refugees was growing increasingly explosive and xenophobia was normalized if not downright legitimized. The situation on the ground is further exacerbated by politicians locked in ever-increasing anti-refugee rhetoric. “Main opposition CHP, which had penned a brilliant report in 2016 on how to cope with the uncontrolled influx, is currently unbalanced in word and deed on the refugee policy. With its usual arrogance, the government is playing at first escalating the refugee crisis and then solving it, hoping it would send enough refugees back to gain points with the voters. But it is unlikely that the ruling party would come up with a solution to the refugee crisis, which has so many interwoven components, both domestically and internationally.”

Cavdar believes that President Recep Tayyip Erdogan, who sees that his current refugee policy will cost him votes, has been trying to make a U-turn since last summer when violent clashes took place between Turks and the Syrian communities. “This change is becoming more and more visible,” she told Al-Monitor.

On Tuesday, Erdogan unveiled a plan to return 1 million Syrian refugees to their country, marking a sharp contrast from his angry rebuke to the opposition for “lacking humanity in their insistence of sending refugees back” in March. Speaking in a video message at the opening of briquette houses to Syrians living in Idlib, northern Syria, Erdogan said some 500,000 Syrians have returned to the safe regions in Syria.

“We are now working on a new project for the voluntary return of 1 million Syrians. It’s a very substantial project that we will carry out with local governments in 13 different regions, including Azez, Jarablus and Tell Abyad,” Erdogan said.

Despite Erdogan’s claims of voluntary or “honorable” return, human rights groups worry that some of the displaced Syrians and Afghans are being returned against their will. Izmir Human Rights Association made a statement last week that a group of Afghans were forced to sign voluntary return papers. In April, Turkey’s Constitutional Court ruled against 13 Syrians who applied to the court to stop their deportation on the grounds that they would face mistreatment and torture if they were sent back to Syria. However, the court ruled that the Syrians faced no particular risk that would prevent deportation, according to daily Sozcu.

Devlet Bahceli, Erdogan’s nationalist ally, said in an impassioned speech before the Eid that Syrians who go home during the holidays should not return. Taking the cue from Bahceli, Interior Minister Suleyman Soylu announced that Syrians who went home for the holidays would not be able to come back. However, by then a group of Syrians had already been authorized by the local governors to go back for three days. The Interior Ministry hastily announced that the permissions given before the minister’s announcement would hold, but no new ones would be given.